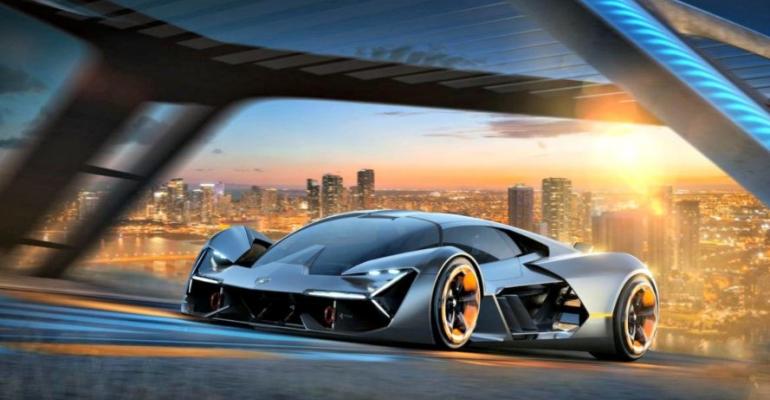 The Massachusetts Institute of Technology is working with Lamborghini as its engineers look for the best route to the all-electric sports supercar of the future.

One year ago Lamborghini and MIT signed an agreement for a 3-year sponsorship alliance.

“For our R&D department, collaborating with MIT is an exceptional opportunity to do what Lamborghini has always been very good at: rewriting the rules on super sports cars,” Lamborghini Chairman and CEO Stefano Domenicali says. “We are inspired by embracing what is impossible today to craft the realities of tomorrow.”

The full-scale model of the exterior-only design visualizing the concept reflects its innovative features and previews the image of a Lamborghini EV in the next decade. It does so by applying advanced technological theories to the body structure and architecture. The model allows further enhancement of “the visual intrigue, breathtaking performance and, most importantly, the visceral emotion found in every dimension of a Lamborghini,” according to Borkert.

The Terzo Millennio project investigates the potential of supercapacitors instead of conventional batteries. The aim is to achieve top performance by banking on the experience gained over the past five years with the application of low-voltage supercapacitors found in the V-12 Lamborghini Aventador.

“The next logical step is the development of a storage system delivering high peak power and regenerating kinetic energy with very limited influence from aging and cycling during the vehicle’s life, and with the ability to symmetrically release and harvest electric power,” Dinca says.

According to Lamborghini: ‟The energy-storage system goes hand-in hand with performance. Each wheel integrates an electric (motor), perpetuating the commitment to 4-wheel drive and in the meantime harvesting the opportunities provided by electric motors: high torque, reversibility and the possibility of moving energy by wire.”

The advanced windshield, which virtually replaces the front hood, suggests the use of energy-absorbing material meeting the standards for pedestrian safety.

Lamborghini’s goals for innovative materials and production technology, which eventually will expand to the entire Audi Group, call for further development of the automaker’s leadership in the design and production of lightweight carbon-fiber structures and parts.

Consequently, Hart and his students at the Mechanosynthesis Group are testing new manufacturing applications for carbon-fiber materials for the bodyshell of the Terzo Millennio. With nanotechnology the car’s entire body can be used as a storage system.

Hart also aims the project at implementing the “self-healing” concept. That means continually monitoring the whole carbon-fiber structure, both visible and invisible, with the ability to detect cracks in, and damage to, the substructure. When this happens, a self-repairing process starts via micro-channels filled with healing chemical compounds, stopping small cracks from spreading.

This allows further weight reduction with increased use of carbon fiber and the application of carbon-fiber composites to high-fatigue parts.

When it comes to passion, emotion and fun, the Terzo Millennio reaches beyond the futuristic yet realistic look taken for granted in a Lamborghini and proposes what it calls the virtual pilot.

This uses various applications to guide a driver toward becoming a pilot. The guidance mimics the Lamborghini Accademia (Driving School) where entrants drive Lamborghinis on Formula 1 tracks behind experienced racing drivers who show them how best to operate their supercar.

Heirs of Italian Tradition to Unveil Supercars at Turin Show
May 18, 2015