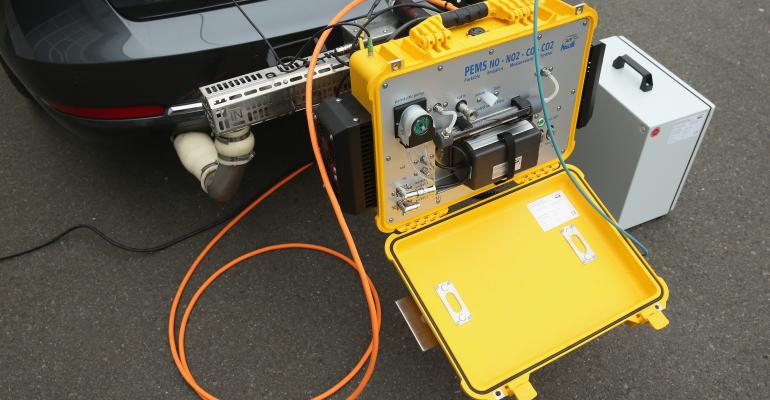 In the final stages of development, Global MRV expects to begin offering its new Firefly emissions-measuring device to fleet operators by the end of 2016. The technology also has drawn interest from regulators around the world.

PEMS has solidified its place in the automotive lexicon thanks to Volkswagen and its recent Dieselgate scandal.

And that’s just fine with Global MRV, a Buffalo, NY-based supplier of PEMS, or portable emissions-measuring systems, which says it has seen a decided uptick in interest for its devices since the German automaker admitted to cheating on emissions certification for several diesel engines.

“It’s been amazing,” Jeremy Burne, director-business development, tells WardsAuto of the interest that’s been generated in PEMS by the VW scandal over the past couple of months. “A very bright light has been shown on this subject matter, and as a result the phone’s been ringing quite a bit.”

Global MRV, which began producing PEMS about a dozen years ago as Clean Technologies, is on the verge of launching its latest product, called the Firefly, billed as the world’s first permanently embedded micro-sized emissions-measuring system.

Traditional PEMS equipment, sold under the Axion brand by Global MRV, is about the size of a suitcase and costs more than $100,000 per unit. It is installed using temporary connections to the vehicles’ onboard-diagnostics system and a hose and sensor attached to the tailpipe.

It also connects to the OBD system and includes a sensor in the tailpipe, but its installation is more permanent and integrated. There’s no readout equipment used to view the data, which instead is beamed into the Cloud so it can be accessed remotely.

Once installed, a procedure Burne says would take a qualified technician about an hour to complete, Firefly can measure mass-flow emissions of carbon monoxide, carbon dioxide, oxides of nitrogen and hydrocarbon in real time.

In the final stages of development, Global MRV expects to begin offering the device to fleet operators by the end of 2016. In addition to the $1,000-per-unit cost of the device, fleets would pay Global MRV a monthly fee to collect the data and deliver customized performance reports that would help operators monitor the health of their commercial trucks in service.

“Most (fleet operators) are not interested in the (specific) emissions on their vehicle,” Burne notes. “What they’re looking for is, what does that information mean? They’re looking for significant trends (or impending problems). Reports can be tailored and curated and customized in a presentable way depending on what the customer wants.”

But Global MRV also sees Firefly as potentially attractive to regulators, who could conduct longer-term real-world emissions testing on government fleet vehicles or potentially even require the technology to be on board all vehicles.

The European Union is moving toward a requirement of on-road emissions certification testing for 2017. The U.S. EPA already has begun its own on-road testing of select vehicles as well, but so far has not fully mandated such tests as part of the certification process.

“We’re talking to regulators around the world, really,” Burne says. “And we’ve seen a number of people (suggesting in the press) that one of the solutions to ensuring vehicle manufacturers and engine manufacturers are meeting emissions requirements in real driving is to have an onboard, embedded measurement to do it.

“But prior to the introduction of Firefly, there has been no technology available to do that.”

Such a widespread application surely would lower the price of the product dramatically, the executive contends.

The $1,000 cost would be based on fleet sales of 5,000-10,000 units a year, Burne says. “We haven’t costed out what it would (be) to make a million of them, but I’m sure it would be a significant reduction – just like every innovation you’ve seen in the automotive industry. Once they become standardized, they become commoditized.”

The PEMS-manufacturing company is owned by David Munro, the current CEO, and four other investors, who acquired Clean Technologies five years ago and changed its name to Global MRV, meant to stand for Measure, Record, Verify.

The company employs eight people but is expecting significant growth in 2016 and 2017 that may result in expansion.