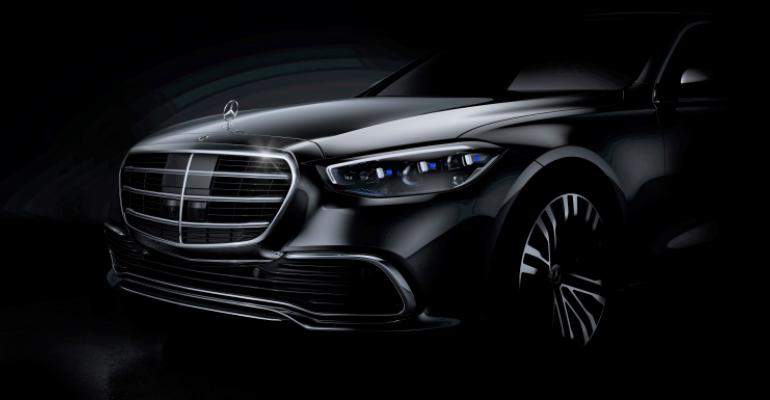 Mercedes-Benz confirms the new S-Class will make its world premiere during second-half 2020 as originally planned, despite recent rumors suggesting production disruptions linked to the COVID-19 pandemic could delay its launch until next year.

Mercedes-Benz reveals the front-end styling of its upcoming seventh-generation S-Class in a single photograph from the German luxury automaker.

In addition to issuing the photo, Mercedes-Benz confirms the new flagship car will make its world premiere during second-half 2020 as originally planned, despite recent rumors suggesting disruptions to production operations brought by the COVID-19 pandemic could delay its launch until next year.

The partial unveiling of the full-size sedan comes a week after a series of spy photographs depicting a lightly disguised S-Class prototype made the rounds of the internet, showing its production exterior and interior in detail for the first time.

The first official image of the new S-Class, which goes under the internal codename W223, reveals its conventional styling. Key elements include a prominent chromed grille with three horizontal blades and angular headlamps with three projector beams.

Describing it as a “technological tour de force,” Mercedes-Benz Chairman Ola Källenius says the company has put its “brightest minds and most creative people” to work on its new model.

“It’s a completely new level in terms of artificial intelligence and needs-based electrification,” he says.

The Audi A8 and BMW 7-Series-rivaling sedan will receive a variety of drivetrain options, including 48V mild-hybrid gasoline and diesel units and a range of newly developed plug-in hybrid powertrains.

New S-Class production is to commence in September at Mercedes-Benz’s Factory 56 in Sindelfingen, Germany. It will be joined by a slightly smaller battery-electric EQS model to be built at the same facility in 2021.

Commenting directly on the Tesla Model S and Jaguar XJ challenging EQ S for the first time, Källenius says it will use CO2-neutral battery cells sourced from an unnamed supplier.