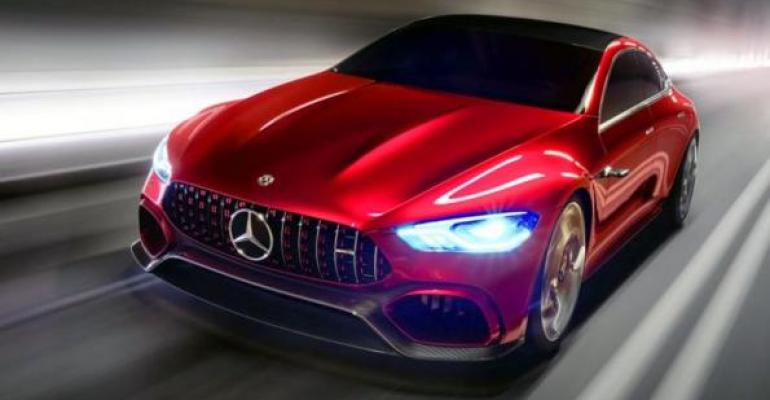 Although “4-door Coupe” suggests the new model is a sedan-cum-coupe model in the mold of the mechanically similar Mercedes-Benz CLS, the new AMG takes its inspiration from the existing GT Coupe by featuring a fastback-style tailgate that gives it the sort of practicality that delivers a “high level of day-to-day suitability,” according to Mercedes-AMG CEO Tobias Moers.

AMG confirms the GT 4-door Coupe will be sold with the choice of two gasoline engines in an initial three-model lineup. Included is Mercedes-Benz’s new 3.0L inline 6-cyl. in combination with a mild-hybrid system in the GT53 4Matic+ and a more powerful AMG-engineered 4.0L V-8. The latter follows the example of existing AMG models by offering two distinctive states of tune in the GT63 4Matic+ and GT63 S 4Matic+.

As their names suggest, each of the initial launch models features a standard fully variable all-wheel-drive system as revealed on the latest E63 4Matic+ along with a 9-speed automatic gearbox.

The basis for AMG’s first 5-door fastback is Mercedes-Benz’s MRA platform. A large proportion of its underpinnings, including its chassis, as well as its electrical architecture, are directly shared with the recently unveiled third-generation CLS and latest E-Class, which will be produced alongside the new AMG model at the German automaker’s Sindelfingen factory on the outskirts of Stuttgart, Germany.

In the GT53 4Matic+, the new model receives 48-volt electrics. It is used to operate an electric motor that recovers kinetic energy under braking and during periods of off-throttle coasting as part of a so-called range of EQ Boost powertrains. The recouped energy is stored in a lithium-ion battery and can be used to enhance performance through an electric boost function, as on the CLS53 4Matic. Unlike the more advanced plug-in hybrid EQ Power system recently introduced on the S560e, it cannot propel the new AMG model on electric power alone.

The entry point to the new GT 4-door Coupe lineup is the GT53 4Matic+. It runs the same mild-hybrid driveline as that recently confirmed for the CLS53 4Matic, with its turbocharged 3.0L in-line 6-cyl. developing 429 hp and 513 lb.-ft. (696 Nm) of torque at 1,800 rpm with an electric motor providing an additional 22 hp and 184 lb.-ft. (250 Nm). Power is channeled through a standard 9-speed AMG Speedshift TCT 9G torque converter-equipped automatic gearbox and fully variable AMG Performance 4Matic+ to all four wheels.

To achieve top speeds of well over 190 mph (306 km/h) in both the GT63 4Matic+ and GT63 S 4Matic+, AMG has engineered the GT 4-door Coupe with an active rear spoiler. Similar in style to that used by the GT Coupe and Roadster, it deploys from the trailing edge of the tailgate to provide added downforce on the rear axle for added stability at high speeds.

The well-received styling of the earlier GT 4-door concept car revealed at last year’s Geneva auto show is carried over to the production version of the new GT 4-door Coupe with relatively minor changes. Certain cues have been borrowed from the GT Coupe and Roadster in a move aimed at establishing a well-defined family look within the AMG lineup, most notably around the front and rear ends. However, the body of the new car is described as unique, sharing no panel or element with any another Mercedes-AMG model.