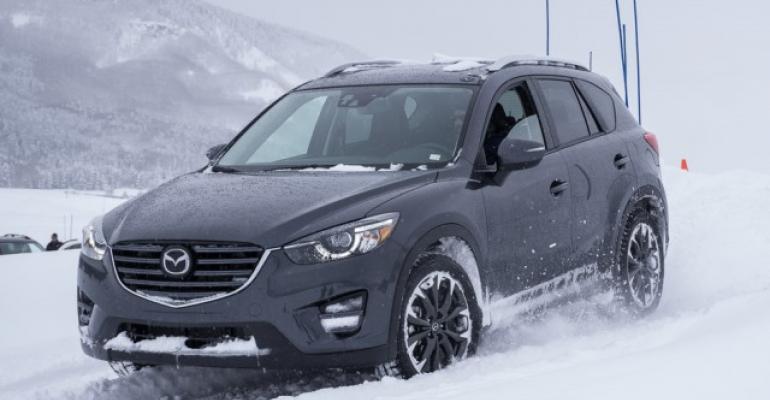 Mazda says its new i-ACTIV all-wheel-drive system uses on-board sensors to predict road conditions so it can match traction to driver demand. The system is offered on the CX-3 and CX-5 compact and midsize CUVs and will be available on the &rsquo;16 CX-9 due this spring.

CRESTED BUTTE, CO – It’s not an everyday occurrence, but there comes a time for every driver when they’re stopped at an intersection on a slippery incline and can’t seem to get enough sure traction to safely pull away.

That’s the scenario Mazda presented to show off the new i-ACTIV all-wheel-drive system offered on its CX-3 and CX-5 compact and midsize CUVs and coming this spring on the all-new ’16 CX-9 large CUV.

Taking AWD to the next level of capability, Mazda calls its system “predictive,” in that it can determine exactly when and how to engage the AWD system before the driver even touches the accelerator and instantly when the wheels start to slip.

The AWD controller scans 200 times per second for data available from 27 sensors and systems already on Mazda vehicles – temperature, vehicle angle, yaw, steering direction, antilock brake activation and even windshield-wiper use – to determine road and weather conditions. That data helps it decide whether to engage the AWD system to transfer torque to the rear wheels.

Many AWD systems don’t lock the transfer case to shift power to the rear axle until after slippage is detected to avoid damaging the transfer case. The danger is that if the AWD transfer case is locked on dry pavement, the system can bind due to differences in speed at each wheel.

“The fundamental challenge with all-wheel drive is determining when to be locked up and when not to be,” Dave Coleman, Mazda North America development engineer, tells WardsAuto. “If the system understands what surface it’s on, and what angle it’s at, and what the driver wants to do, it can respond.”

Mazda says in normal driving, 98% of torque is routed to the front wheels, however a small percentage always is sent rearward so the AWD is ready to quickly engage when needed. The rear wheels are engaged via an electromagnetically activated multiplate clutch that itself is prompted by a pilot clutch for quick response.

“Conventional wisdom is that it’s most efficient running in front-wheel drive, but that’s not always true,” Coleman says. When the front tires suffer some slippage, a rearward bias of up to 40% can result in higher fuel economy compared with running in front-drive, he notes.

Mazda says i-ACTIV causes no fuel-economy penalty and is no more expensive or complex than any other AWD system on the market.

Taking Theory to the Track

Out on a frozen test track near Crested Butte, CO, Mazda lets us run its system through a battery of tests against competitive vehicles from Honda and Subaru, all fitted with Blizzak DM-V2s, the company’s latest winter tires for CUVs.

In nearly every test, from slalom to cornering to braking, the time-tested AWD system in the test Subaru Forester proved a near-equal to the test Mazda CX-5s, with both vehicles providing similar intuitive handling and the Mazda providing a more linear response to inputs.

The Honda CR-V’s overreactive traction and stability controls limited its response and made it feel sluggish to the point of near-inaction; in the real world, over-intrusive controls might be shut off to make the vehicle more responsive.

The biggest variance came during a very specific test that involved bringing each vehicle to a stop at the top of a snow-slick hillside, turning the wheels one rotation of the steering wheel and then attempting to drive away. Mazda says the intent is to mimic a real-world driving situation in which you’re stopped at an uphill intersection on snow and need to make a turn as you pull away.

In the test, the CX-5 provided prompt power to the wheels with traction, whether front or rear, left or right, quickly and smartly pulling the vehicle up and over the slippery hillcrest. Honda’s CUV side-slipped slightly at the front end until the rear axle engaged to provide traction and give a needed shove.

The Forester struggled with the test, digging in with its front tires and providing no rear-axle engagement until the front wheels were corrected back to center, at which point the rear wheels engaged and the vehicle easily clambered over the slick grade like the mountain-goat machinery we’ve come expect from Subaru.

Mazda engineers say i-ACTIV’s edge is that it allows rear-axle engagement instantly and even if the front wheels are angled. Other vehicles suffer from a delay in engagement or won’t lock the transfer case at all if wheels are turned to avoid damaging the mechanicals, they say.

Finally, Coleman says, the predictive setup allows Mazda to assure the same active and exhilarating driving character with or without AWD.

“What we’re trying to do is make the car completely intuitive to drive every day,” Coleman says. “The all-wheel-drive system is just an expansion of that to slippery conditions. Our goal is to be completely seamless and confident all the time.”