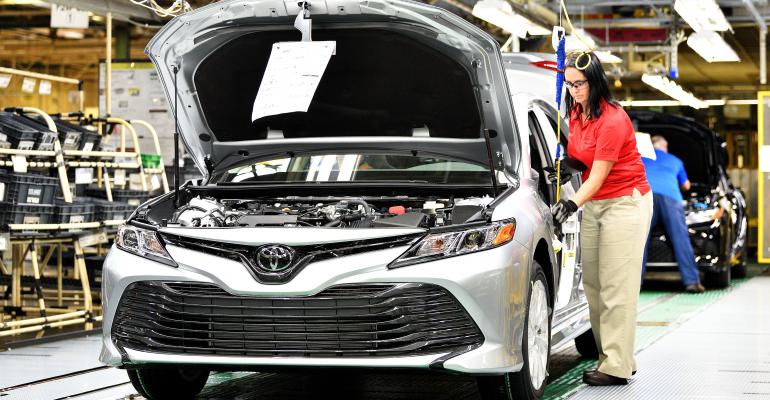 Launch of the &rsquo;18 Camry introduces the automaker&rsquo;s new TNGA global platform to North America, but it marks only the beginning of the extensive overhaul under way in Kentucky.

GEORGETOWN, KY – Flexibility for the future is the key driver of the $1.33 billion investment under way to retool Toyota Motor North America’s Georgetown, KY, assembly plant.

The overhaul is designed around the automaker’s new scalable TNGA (Toyota New Global Architecture) vehicle platform that underpins the ’18 Camry, which celebrated Job One here on June 28, and will roll out to additional models built at the Georgetown facility over the next couple of years.

Making its North American manufacturing debut, the new global platform launched with the Japan-built ’16 Prius hybrid and also is the basis for the C-HR small CUV exported to the U.S. from Turkey. But the Camry, which boasts all-new powertrains and other enhancements, represents the most complex application for the architecture to date.

Ultimately, TNGA will spawn all of Toyota’s front-drive vehicles, and that’s when the money spent at this 31-year-old plant really begins to pay dividends.

“(Part of) that $1.33 billion (investment) is to get this factory reborn for the next 30 years,” says Dan Antis, manufacturing vice president-stamping prep at the Georgetown plant.

Among key investments is a more versatile engine-dress line, Georgetown’s first aluminum stamping press and new welding operations to accommodate the more-strategic use of ultra-high-strength steel in the car’s underbody.

Additional changes revolve around improving assembly-line ergonomics to make the job easier for workers and enhance vehicle quality. That includes carriers that raise and lower cars for optimal access as they move down the line, as well as special devices that assist line workers in some of the trickier tasks, such as installing the Camry’s exhaust system. Brighter LED lighting also has been installed in some areas, with plans to take that plant-wide in coming months.

Besides helping build a better product, the investment will allow Toyota to respond more quickly to sudden market shifts. The automaker was caught flat-footed as U.S. consumers seemingly overnight began leaving sedans for CUVs in droves, and the retooling of Georgetown is aimed at avoiding a repeat of that scenario down the road.

The Camry and Avalon accounted for 19.6% of Toyota’s U.S. sales in 2015, but that figure fell to 16.7% for January-June this year. The launch of the ES 350 in 2015 has helped lessen Georgetown’s vulnerability to the market’s CUV swing, but volume for that model is declining too, down 21.8% from year-ago for the first six months of 2017, and it’s not hard to envision a day when the massive factory will need to build more than just sedans to keep humming.

Once TNGA is fully implemented, the Kentucky operation will be able to shift its mix quickly to any body style and powertrain lineup to better match production with demand.

By 2020, half of all Toyota vehicles worldwide will be based on the new global architecture, the automaker says, noting an ideal TNGA plant is designed to build up to eight different models and a combined 200,000 vehicles annually.

“The benefit will be (with) changeovers in the future,” Antis says. “A new model? We don’t have to worry about the platform. We don’t have to change the tooling on all the lifters, transfers and conveyors, because that platform doesn’t change. And every (TNGA vehicle) in the world has the same underbody and will fit in this plant.

“So it costs a little more now (in tooling), but in the future we will see the cost advantages based on this new design.”

All Eyes on Camry Launch

For now though, officials are focusing on the launch of the ’18 Camry, which represents the most extensive new-product changeover in the plant’s history. Some 96% of the midsize sedan is all new, officials say, and there are 380 more parts required to build one compared with the outgoing car.

Although significant engineering effort was put toward making TNGA vehicles simpler to build, there also was intense focus on creating a better, more versatile platform. That has added to manufacturing complexity in some cases, meaning Georgetown will take a couple steps back before it can move forward in efficiency.

Toyota has added 700 jobs at the factory as part of the Camry launch, bringing total employment to a record 8,000-plus on two shifts. Some of those positions result from additional work brought inside the plant, such as in the plastic-molding shop, but a portion are temporary jobs needed to help the facility get up to speed in the changeover to TNGA.

“I know it’s confusing, because the original talk around TNGA was it was supposed to optimize production efficiency,” Toyota Motor Mfg. Kentucky President Wil James says. “Ultimately it will. But for us, you have to go through the transition. And our transition has us duplicating some things for a little while until that happens.”

The short-term redundancies revolve around the continued production of the Avalon fullsize and Lexus ES 350 luxury sedans, still riding on older platforms and built alongside the new Camry.

“When we change over in the future with the Avalon, we’ll be able to pull that efficiency out of (the operation),” James says. “So some of the efficiencies will happen going forward; it can’t happen while you’re transitioning.”

Avalon makes the move to the new architecture next year and the ES 350 follows suit soon afterward, plant officials say.

In the meantime, Georgetown will begin the ramp-up to full production of the Camry, a process expected to take four weeks. The takt time target (the time given each worker to complete required tasks) is 63 seconds. Full-speed here is put at 55 seconds, but with the U.S. market soft for sedans, Georgetown will run below peak for the foreseeable future.

New to the plant is an engine-front suspension prep line that not only accommodates the ’18 Camry’s mix of 4-cyl., V-6 and hybrid powertrains, but also is flexible enough to handle all future powertrain needs. That means if Toyota decides to add turbochargers to boost performance or follow the engine-downsizing trend taking hold industrywide, the Georgetown plant won’t require massive tooling changes. That wasn’t the case with the old line, which had fixtures and equipment geared to specific powertrains.

“The thought is ‛How can we use (this equipment) for the next 25 or 30 years? How can we make a line that we can adapt to changing structure, changing volume and changing product needs?’” Burrows says. “So (it’s) not only what are we doing today to enhance Camry. We’re also looking at the long-term viability of (the Georgetown plant).”

Although the new engine line is shorter, more work is being performed, with the marriage of the engine, radiator and entire drivetrain into a single module that then is mated with the vehicle. There also are fewer processes required for production of the Camry’s hybrid powertrains.

“Streamlining and simplifying manufacturing is really a key for us out on the floor,” Antis notes.

An older plant like Georgetown might not see as great a benefit, but Toyota says a plant designed from the ground up to build TNGA vehicles – such as its new facility under construction for Corolla production in Guanajuato, Mexico – would have a much smaller footprint and cost about 40% less to build than a traditional assembly plant today.

Also a first for Georgetown is an aluminum blanking line and stamping press. Used to make the Camry’s hood, extensive research went into getting the production methodology right and training workers how to handle the parts without causing damage, inspect them for defects and make repairs when needed.

Officials expect to continue to check 100% of the hoods for the next couple months, but if all goes well the inspection rate will fall to about one in 24. Initially, Georgetown will carry an 8-hour stock of hoods, but once fully ramped up and quality is assured, inventory will be cut in half, officials say.

The single 1,600-ton press has the capacity for Georgetown’s entire run of 500,000-plus vehicles annually, so there’s room to expand aluminum applications with future models.

Though limited to Camry hoods for the moment, “we can make any structure or component out of aluminum now,” Burrows says.

Welding is among processes that have become more complicated with the new Camry. In order to reduce weight, lower costs and improve rigidity, the TNGA platform uses a mix of ultra-high-strength steels to produce certain sections of the underbody, for example. In some places where the previous Camry employed a single stamping produced from a single steel grade, there now are numerous individual pieces of different grades and thicknesses that must be laser-welded together like a quilt to create the vehicle’s floor.

“We’ve got over 30% additional welds in this car,” James notes.

The Georgetown plant is Toyota’s biggest worldwide. It sits on 1,300 acres (526 ha) and covers some 8.1 million sq.-ft. (753,000 sq.-m) under roof, equivalent to 169 football fields, officials point out. Although there’s no sign of additional models coming into the plant or plans to otherwise increase capacity, room for expansion is being freed up nonetheless by the pending elimination of one of three trim lines due to the assembly efficiencies of TNGA and construction of a much-needed new paint shop.

“The life expectancy of that kind of equipment is about 30 years,” Antis says of the paint shop, meaning the current tooling is nearing its expiration date.

Once the new paint shop comes online, Toyota will be able to take down the old one, clearing additional room for unspecified future expansion officials say is in the cards.

Even more space will be freed up as Georgetown optimizes its layout and logistics around the TNGA platform, James says.

“Before, it didn’t make economic sense to change some of these big monuments, pieces of equipment, that we had in place for the last 30 years,” he says. “But with the TNGA flow, it made sense to (finally) change even some of those things.”

The TNGA retooling began about 18 months ago, and Georgetown was able to do the job on the fly, working weekends and holiday shutdowns so as not to affect production. To get the job done, employees logged more shutdown hours than ever recorded at any Toyota facility, Burrows says.

Hourly workers, organized in teams of four or five and then into larger groups of four to five teams, went through extensive training to build the new TNGA-based Camry. Each employee was put through 300-400 repetitions of his or her task prior to and during trial production that began in January.

During ramp-up, North American Camry production will be supplemented with imports from Toyota’s Tsutsumi, Japan, plant. But those shipments will be dialed down over the next 45 days as Georgetown reaches its planned line speed.

It currently takes about 20 hours to build a car here. That includes roughly two hours in the body shop, 10 hours in paint and a single shift of assembly. That, too, will shrink, once TNGA is fully integrated at Georgetown.

“This is the biggest change Toyota’s made in a long, long, long time,” sums up Antis. “It’s a very massive endeavor.”