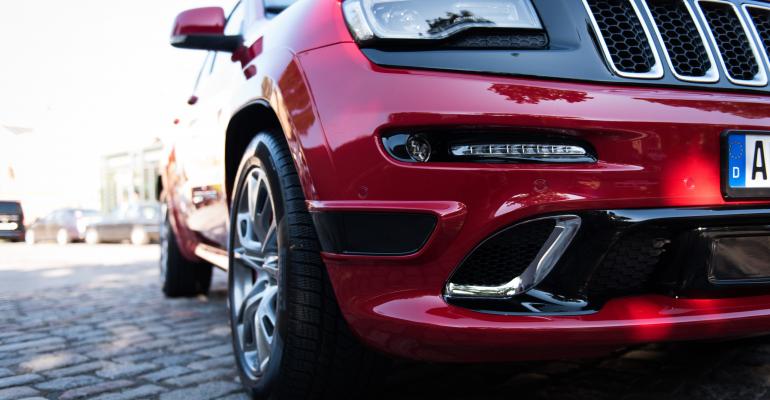 The Canadian automotive supplier is hoping to bust the perception that self-driving vehicles need to look like a science experiment.

Supplier Magna is hoping to change that, and in doing so bust the perception self-driving vehicles need to look like science experiments.

“I think one of the discussions that seems to be out there in society is, as we move towards these more autonomous (vehicles), will the character of the automobile go away? … People are not going to give up wanting their cars to look the way they look,” Larry Erickson, global director-Magna exteriors design group, tells WardsAuto here in an interview.

To show how stylish vehicles can coexist with the long-range sensors needed for Level 4 autonomy, Magna inconspicuously has added lidar and radar units to a current-generation Jeep Grand Cherokee SRT.

Rather than a single, top-mounted lidar on the roof of the SUV, one sensor is hidden in its center lower fascia behind glossy black plastic. Another unit is in a similar location in the rear of the vehicle; there’s also lidar and radar sensors at each of the CUV’s four corners as well as center front radar. “At this point lidar requires a different surface finish to project through, whereas the radar in the upper area (of the corner is) a little bit more flexible so it’s going through a painted surface,” Erickson explains.

The SUV’s corner lidars also are broadcasting through a matte black, standard-formula thermoplastic (pictured above), but he says Magna, which has a material sciences division, is working on “the technologies that’ll allow us to go through other surfaces.”

The Canadian auto supplier brought the Level 4 autonomous Grand Cherokee SRT concept, which it calls the MAX 4 and was a co-development of its exteriors and electronics units, here to the recent Eyes on Design automotive exhibition near Detroit. Erickson, also a 2018 Eyes on Design judge, says Magna hoped the SUV could draw the attention of the many OEM designers who attend the annual event.

“There’s a lot of people (attending) that either work in the industry or spend time in it … So we thought (we’ll) come here, talk to the public, educate the public on (the MAX 4), and at the same time hopefully talk to some of our customer base,” he says.

Magna wants to be the “supplier of choice” to integrate autonomous technology into a vehicle stylishly, collaborating with the OEM early in the vehicle-development process so the two sides can maintain a vehicle’s design DNA, Erickson says.

“Magna’s about the best in the world at fascias and that’s where a lot of the sensors will be,” he says. “I think on just about any vehicle you can incorporate the sensors and not change what was the original (design) intent.”