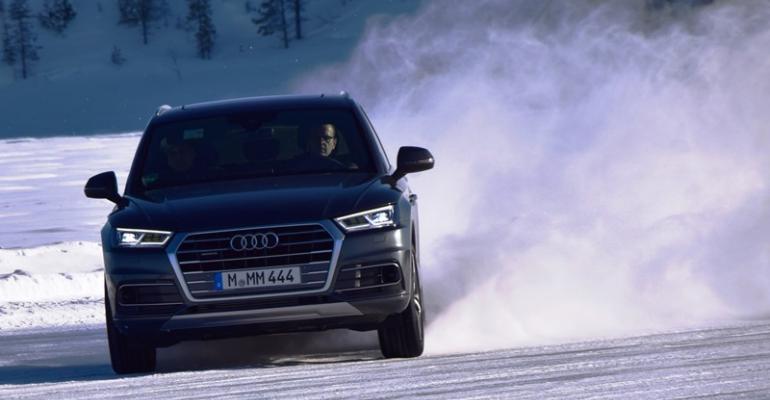 The Canadian supplier recognizes most drivers only need torque to two wheels even if AWD systems routinely drive four wheels all the time. Disconnecting two of the wheels from the drivetrain when possible can significantly improve fuel economy.

ARJEPLOG, Sweden – Consumers in certain regions love vehicles with 4- and all-wheel drive, and environmental regulators around the world are hounding automakers for more fuel-efficient vehicles. It was only a matter of time before the industry found a cost-effective way to satisfy both demands.

The simple, elegant solution: disconnecting power to two wheels when 4WD isn’t necessary, which is nearly all the time.

Axle suppliers are eager to help automakers down this path, but the No.1 player is Canada’s Magna International, which claims 30% market share for 4- and all-wheel-drive systems.

Customers include BMW, which markets Magna’s AWD components under the name XDrive, and Audi, whose well-known quattro AWD system gets a big assist from Magna.

Here near the Arctic Circle, where automakers and suppliers test chassis and powertrain concepts on frozen lakes, Magna demonstrates both a prototype BMW X3 and production Audi Q5 with disconnecting axle systems that function basically the same.

For the production X3, torque is normally biased 60% to the rear axle. But in the case of wheel slippage, the system is intelligent enough to quickly redistribute up to 100% of available torque to the wheels on dry pavement.

On Magna’s new prototype, the supplier recognizes that most X3 drivers only need torque to the rear wheels most of the time, yet the production system powers all four wheels. Disconnecting torque to the front wheels can significantly improve fuel economy.

The prototype integrates the FLEX4 disconnect unit, which cuts off torque to the front wheels and will restart it within 0.3 seconds when the driver steps hard on the accelerator – for instance, when passing or when climbing a steep grade.

A test drive of a prototype X3 finds the system working as advertised, and transitions are indiscernible. A slick electronic camera placed inside the system, connected to a tablet placed on the instrument panel, allows vehicle occupants to see when the constant-velocity joint within the FLEX4 unit is not rotating, meaning torque is not being transmitted to the front axle.

During our test drive on local paved roads, the front axle is disengaged most of the time, except when accelerating from a standstill or during hard braking. In the case of the X3, Magna says the disconnect system can reduce fuel consumption up to 4%.

A key enabler of the technology is Magna’s new EcoMax semi-dry transfer case, which integrates a dry clutch for seamless disconnecting from the drivetrain.

The wet multi-plate clutch in the ActiMax transfer case currently used in the production X3 xDrive system (and supplied by Magna) tends to experience friction in the form of drag torque, so the new EcoMax transfer case, optimized for disconnecting from the drivetrain, is designed to minimize it.

The system also employs a “pre-emptive control” strategy to calculate how much additional force the driver is requesting, either through the steering wheel or accelerator pedal. If the driver is asking for at least 30% more torque, then all four wheels will receive it.

X3 drivers need only RWD about 90% of the time, Sackl says. “But when you need this function, it switches quickly to 4-wheel-drive,” he says.

The goal with integrating FLEX4 and ActiMax was to have zero impact on vehicle dynamics. “In all conditions when you need traction, vehicle performance and high lateral-acceleration safety to the car, the 4-wheel-drive system is always seamlessly and immediately re-engaged.”

Audi also uses FLEX4 as part of its new quattro ultra AWD system, appearing first in the Q5 and A4 allroad. But unlike the BMW applications, Audi decouples the rear axle from the drivetrain, allowing the front wheels to propel the vehicle about 80% of the time.

When torque is needed at all four corners – for instance when the road is slick – the rear axle is re-engaged imperceptibly within a half-second. A multi-disc clutch integrated in the rear axle carries out the switch between front- and all-wheel drive.

Magna worked with Audi to fit the package into vehicles with longitudinally mounted engines and dual-clutch or manual transmissions.

The new system is lighter than the previous permanent AWD setup and reduces friction losses as well. First launched last year in the A4 allroad, quattro ultra reduces fuel consumption and emissions about 3%.

“Together we developed an innovative system that combines driving pleasure with a significantly smaller carbon footprint, as well as increased safety to help Audi set a new standard for all-wheel drive,” says Jake Hirsch, president of Magna Powertrain.

Audi’s electronic AWD management is networked with several additional control devices that collect and evaluate data, such as steering angle, friction coefficient, lateral and longitudinal acceleration and the motor torque in 10-millisecond intervals.

The control system also takes into account a person’s individual driving style, the status of the electronic stability control, the selected driving mode and whether a trailer is being towed.

High-performance Audi models also could receive a sports differential supplied by Magna, enabling torque vectoring (the transfer of torque from side to side to improve stability), the supplier says.