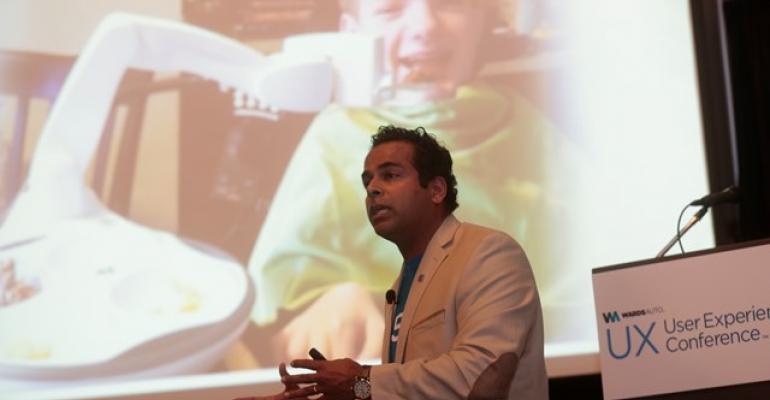 Live in Moment for UX Success

NOVI, MI – Automakers and suppliers looking to break new ground around the user experience should think beyond the “glass slab” and focus on delivering the right technology at the right time, experts say.

“Once you do that, you make meaningful and beautiful designs,” says Jeevak Badve, vice president-Strategic Growth at Sundberg-Ferar, an industrial design firm in suburban Detroit.

Badve points to recent developments in the robotics industry, where patients with severe spinal injuries unable to feed themselves have access to technology that helps with their meals. Previously limited by what a human caregiver could provide, kids and adults now can choose their own menu and the food will be served by the robot.

“Now a kid can skip his vegetables,” Badve tells the 2016 WardsAuto User Experience Conference here. “It allows a kid to be a kid and takes the pressure of the rest of the family, too.”

Eric Flecher, executive consultant at Columbus, OH-based Pillar, urges the industry to think beyond the glass slab of devices and display screens.

“As designers we need to think outside of the glass slab,” he says. “Think of it as one of the key pieces, not the whole thing.”

Flecher cites as one example the Nest home thermostat, which learns homeowner habits and adjusts the temperature accordingly. Emerging infant socks monitor a child’s vital signs, he adds, but asks whether the technology could go a step further and turn on a soothing light in the baby’s room when it wakes from a nap.

Or perhaps a FitBit exercise wearable also could determine a person’s emotional state so loved ones might be made aware of a difficult moment for child or sibling and provide comfort.

“Be in the moment,” Flecher offers. “Know what the moment is and you can deliver success there.”

Kimberly Clavin, an engineer, educator and innovator at Pillar, alerts the conference to prepare for a boom in wearable technology. She cites estimates of it becoming a $34 billion industry by 2020, as wearable makers continue to broaden innovation beyond watches to other intelligent and predictive clothing fusing technology and electronic textiles.

“Wearables are all over the place, and they are not in a single sector,” says Clavin, clad in a black skirt with a neon-green light pipe.  “There is so much in this space right now and more to come.”

But, not unlike the auto industry, the wearables sector faces challenges, such as battery-power limitations, data and security concerns and lack of scale to keep a lid on costs.

Low-power solutions are emerging, though, and the potential for a personal data cloud over users is being examined. Incubators and accelerators are opening to address the scale issue, while an industry association has been created to share best practices and turn developers on to university partnerships.

On the topic of privacy concerns, Clavin thinks consumers will come around.

“There is a creep factor,” she says. “But people are relinquishing their fear of Big Brother because they see the benefits.”

Both Sundberg-Ferar and Pillar are located in the Midwest, suggesting Silicon Valley’s rein as technology king could be in jeopardy. Clavin, who grew up near San Francisco, says that could be misleading because connectivity offers innovators the opportunity to live and work where they please and leave “the hustle and bustle” of northern California behind.

“Silicon Valley is still the leader, but we are not far behind,” he says.

Cars to Make Comeback in Battle Over Connectivity
Oct 04, 2016