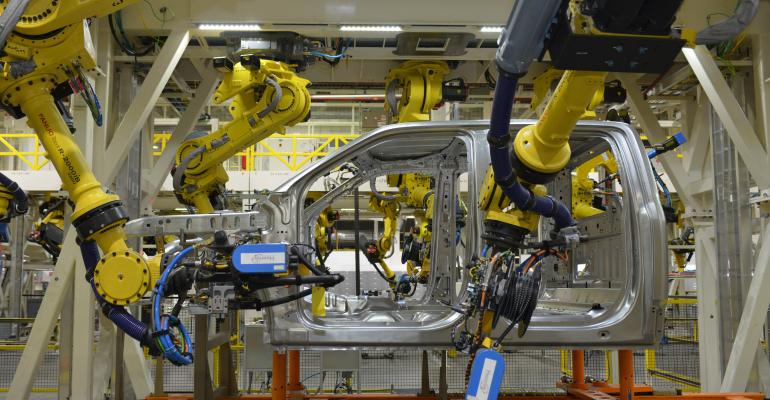 Lightweighting Critical to 2025 CAFE, But Will Take Commitment

Taking mass out may be the toughest challenge automakers face. It not only takes clever engineering, but also requires major commitments in capital for new tooling and manufacturing processes.

SOUTHFIELD, MI – Electrification and other alternative-powertrain technologies get most of the press, but automakers will fall far short of 2025 U.S. CAFE targets without major advances in vehicle lightweighting, industry analysts and insiders say.

However, taking mass out may be one of the toughest challenges facing manufacturers, which not only will have to engineer new materials into vehicles but also better cultivate an emerging supply base while putting large amounts of capital at risk, panelists at a Society of Automotive Analysts session on the topic here contend.

The auto industry is faced with a stiff 54.5 mpg (4.3 L/100 km) CAFE bogey in the U.S. for 2025, and similar requirements are in place in other global markets that will force drastic changes to vehicle powertrains, aerodynamics and the materials employed.

Michael Robinet, managing director of IHS Automotive Advisory Services, says automakers will need to show CAFE improvement of 4%-5% per year in order to hit the 2025 targets, and that task will be made even more complicated with the shift in body-style preference that is seeing more Americans choose CUVs – with their higher profiles, extra seats and large amounts of heavy glass – over conventional sedans.

Cost is an even bigger prohibiting factor, which is why most of the industry’s mass-reduction effort will be focused on higher-priced D- and E-segment vehicles, he says, where it will be much easier to absorb the markup from lighter-weight materials such as aluminum, carbon fiber or magnesium.

Not all automakers are approaching lightweighting the same, a fact borne out in talks by two of the panelists.

Vishwas Shankar, an analyst with Frost and Sullivan, says to look for Ford, Audi and electric-vehicle producer Tesla to be among the leaders in aluminum use through the end of the decade, while automakers such as GM and Honda stick more closely with steel.

Some of the industry’s reluctance to convert to new materials involves the investment in new tooling and processes required. For instance, different fastening techniques are needed to join aluminum than are used for steel, and processes employed and time required to produce carbon-fiber parts are vastly different than for metal.

Laura Anderson, president and CEO of Michigan-based Aluminum Blanking, whose company was launched in the late 1970s as the industry turned toward the lightweight metal as an answer to meeting newly minted CAFE standards, sees another new era unfolding that will take an even greater commitment from automakers and suppliers.

“We will need to be agile in this period of flux,” she says, as lightweighting materials move from niche applications to commodity usage. “For suppliers to meet the demand, we’ll need better cooperation (throughout the supply chain).”

No to mention firm commitments from automakers, she adds. “We have to be able to go to our banks with a business case if we are going to add new capacity.”

Ford’s Chappuis admits that can be a tall order at times.

“There’s a natural desire to want to keep that (current) infrastructure. You can’t just throw that (existing) capital out the window,” he says, adding automakers will want to continue to move slowly on smaller projects that prove out the process before committing to bigger investments.

And any commitment will have to extend to more complex logistics, panelists say. Chappuis talks about the intricate recycling process he spearheaded for F-150 production in order to save precious aluminum scrap, saying some industry standardization would help.

Sorting the material is critical, because aluminum comes from multiple suppliers with varying chemical properties, so Ford had to devise new logistics for recovering and separating the metal. It even designed special trucks to transport the aluminum back to its provider.

In all, Ford is able to recycle 87% of its F-150 aluminum stamping scrap back to originating suppliers Novelis and Alcoa, Chappuis says.

Anderson says her company’s savings double by returning aluminum scrap to its supplier, rather than disposing of it through a general recycler, so a cost-effective scrappage strategy has to be part of any new materials scenario.

Automakers also face the challenge of making sure the lighter vehicles aren’t less safe, all while meeting customer demands for an increasing array of weight-inducing features.

“Innovation has to be added,” Shankar notes. “You still need to have that ‛wow’ factor. It’s not all about taking something out.”

Report Says Automakers Finding It Easier to Be Green
Mar 29, 2016