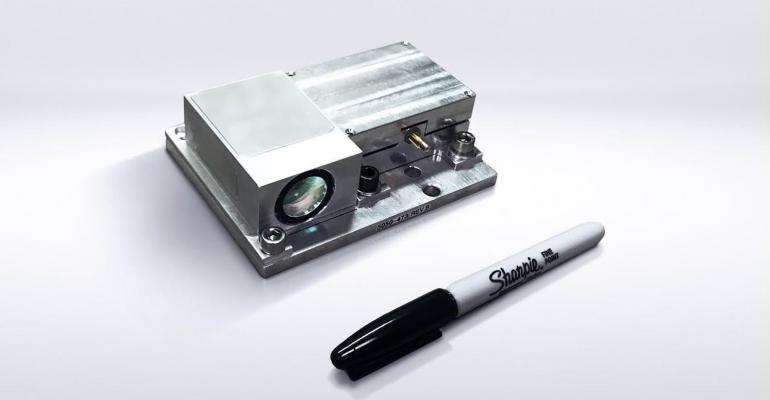 It’s been less than two months since General Motors announced its acquisition of Lidar developer Strobe Inc., and in that time the Pasadena, CA, startup has gone from virtual obscurity to being a driving force in the automated-vehicle segment.

Strobe co-founder and chief researcher Lute Maleki, an atomic physicist who pioneered much of the sensor technology purchased by GM for an undisclosed amount, explains the company's meteoric rise as the difference between car radio signals.

Other developers’ technology “is like AM radio,” Maleki says during an interview with WardsAuto. “Our technology is like the FM radio, and that’s not just an analogy, that’s absolutely correct, physically speaking.

“In the case of AM radio, you do amplitude modulation, detect the amplitude, change the amplitude, the intensity,” he says. With FM radio, the frequency of a signal is changed and is “much clearer, much less noisy and yet its range is longer, for the same power. Our technology is like that, whereas everything else that’s on the market currently is like the AM radio because they do amplitude and intensity detection.”

With the Strobe purchase announcement in early October, GM also indicated it was folding the outfit’s 12-member engineering team into subsidiary Cruise Automation, which recently unveiled plans for “the world’s first mass-producible car designed with the redundancy and safety requirements necessary to operate without a driver,” according to a company statement.

Kyle Vogt, Cruise’s founder and CEO, claims in the same release that “Strobe’s Lidar technology will significantly improve the cost and capabilities of our vehicles so that we can more quickly accomplish our mission to deploy driverless vehicles at scale.”

Commercial Lidar units, such as those sold by Quanergy, calculate the distance between a sensor source and a target – presumably another car or something else in the road ahead – by measuring the delay between the burst of a laser pulse and the reception of its reflection.

Vogt says on his Cruise Automation blog that the Strobe technology, which Maleki and his team designed to fit on a single chip, is expected to “reduce the cost of each Lidar on our self-driving cars by 99%.”

Although GM hasn’t offered any other specs about the sensors it’s developing with Strobe’s input, engineering publication IEEE Spectrum reported earlier this year it had obtained a document prepared for a foreign trade delegation in which Strobe claimed to have a $100 prototype Lidar with a 984-ft. (300-m) range and a processing time of fewer than 45 milliseconds.

Other Lidar technologies “lack two significant features: one is performance, the range being long enough, the resolution being high enough and the ability to detect speed directly,” says Meleki, who spent nearly three decades as a researcher at NASA’s Jet Propulsion Laboratory before establishing laser research startup OEWaves, which spun off Strobe in 2014.

Current Lidars available off-the-shelf send a “bucket of photons to the target, it gets reflected back and you just detect the intensity of light. And then they send a signal again to the target and receive it,” he says. “And every time they send a signal to the target and receive it, they measure the distance, the range...looking at how the range is changing, they have to go back and calculate what the speed of the car (ahead) is...but it’s time-consuming and it kind of slows down the process of trying to get the information into the brain that controls the car.”

Additionally, those other Lidar units don’t yet offer a way to shield returning light signals from being affected by interfering light sources such as the sun.

A Strobe Lidar system is based on the principle of coherent communication, where “we send light out to a target, it gets reflected back and then it mixes it with the same source that created the light that was sent out. That mixing process gives you a signal that represents how far the distance is and what is the velocity with which the target is moving, simultaneously. This is exactly like radar,” says Maleki, now listed as senior distinguished engineer at Cruise Automation.

“When you do coherent detection, you’re not detecting just the intensity, but you’re also detecting the frequency change and the phase change and that’s what really gives you the superior detection capability,” he says. “The signal that comes back not only gives what the distance is to the target but automatically also tells you how fast the target is moving.”

Maleki and his research crews at OEWaves and then Strobe further improved laser detection with what he calls a “whispering gallery mode” optical resonator, which reduces a laser’s linewidth and produces a far clearer signal.

“What we managed to do is to get our microresonator and combine it with a semiconductor laser, which is the size of a grain of sand, essentially, and out of that get even higher-quality laser light than you can get with these much larger laser systems,” he says.

The key to understanding Strobe’s contribution to the auto industry’s future is knowing “we invented the capability of having a narrow linewidth laser, a low-noise laser out of a semiconductor laser...That was part of the invention that Strobe owned, part of the patent. And putting this laser into a coherent Lidar application was the rest of it,” Maleki says.

“Finally, while the prototypes that we have made are very small compared to many Lidar systems, we still use what we call free-standing optics, millimeter-scale lenses and mirrors and beam-splitters and things like that. All of this can be put on a chip without having to invent a whole new process.

“Not only do we get the performance that is required, but now we have a system which is fundamentally low-cost to produce, because the semiconductor laser is inexpensive and the detector...(is) very simple and very inexpensive and we need only one laser and one detector,” he says. “That’s chief for automotive applications.”