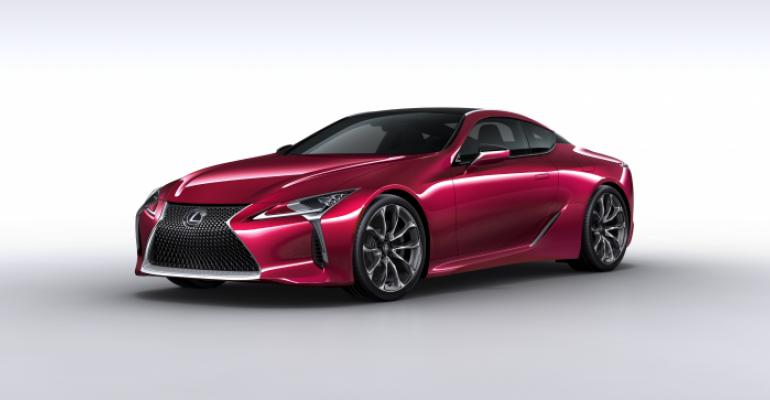 Unveiled in its production sheet metal at Detroit&rsquo;s North American International Auto Show in January, the Lexus LC 500 &ldquo;will be a pretty spectacular car for the money,&rdquo; a Lexus executive says.

Chief Engineer Koji Sato says Toyota’s GA-L platform will underpin the LC 500 and all future rear-drive models in the Toyota luxury brand’s lineup. Based on the current portfolio, that would include the next-generation LS, GS, IS and RC, with both rear- and all-wheel-drive powertrains.

Sato declines to say whether the platform might also be adopted for Toyota’s luxury lineup overseas, including the Crown models.

Unveiled in its production sheet metal at Detroit’s North American International Auto Show in January, the LC 500 is said to boost torsional rigidity 60% and chassis (side-force) rigidity 35% over the current GS sedan.

The car will feature a new triple LED headlamp unit and a slight upgrade of Lexus’ safety package, including pre-collision and lane-keep-assist technologies.

“We have such a big following here in the U.S. So many of our loyal customers would like to have a car like this,” he says.

But perhaps more importantly, the coupe likely is to draw in buyers new to Lexus, Templin believes, based on the LC’s lauded and close-to-concept-car styling, new platform, new 10-speed automatic transmission and an expected base price of less than $100,000 in the U.S.

But Templin also considers more “rare air” models such as the Mercedes-Benz S-Class coupe, Aston Martin Vantage and Maserati GranTurismo Sport to be competition. Those three start well north of $100,000.

“It’ll be a pretty spectacular car for the money vs. the other competitors,” Templin says. “This car will blow (the Vantage) away and the typical transaction price on a 6-Series is higher than what this will be. Optioned up (the LC will) go a little higher, but the base price you’ll see out there will be a nice car at a very good value proposition.”

Lexus envisions the LC 500 as one leg of a three-legged flagship strategy. Included in that is the car most view as Lexus’ flagship, the LS fullsize sedan, but Templin also includes in the mix the LX large SUV. Lexus sells six times more LX SUVs in the Middle East than in the U.S.

The 3-row ute may face regulatory pressure long-term, being a body-on-frame SUV, he says.

“But, in the mid-term I still see (large SUVs) being a really important product for us that will stay the course.”

He stops short of saying what technology the new LS will have. The new BMW 7-Series has gesture-control technology, which allows drivers to change radio stations and turn up or down the temperature via specific hand movements.