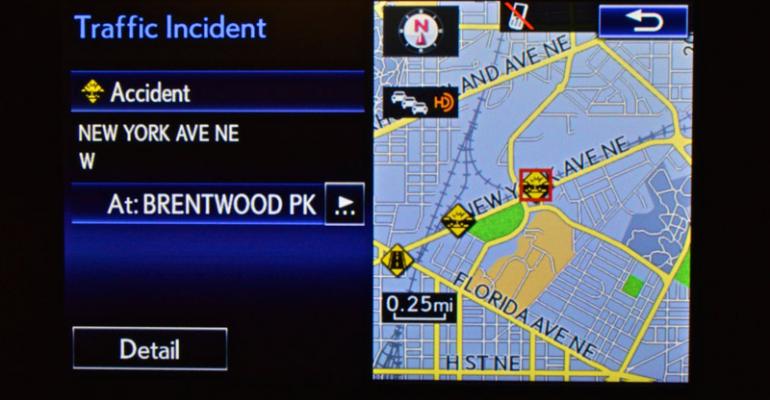 Ibiquity, the developer of HD radio technology, says other auto makers are interested in streaming real-time traffic and weather via radio broadcasts.

The all-new ’14 Lexus IS sports sedan is the first vehicle to offer high-definition radio with subscription-free, real-time traffic and weather information, but it won’t be the last, according to Ibiquity, the developer of HD radio technology.

“The economics of using radio stations for new digital content are great,” he tells WardsAuto. “Lexus is doing it with new services and other car companies are taking notice of that.”

Unlike traditional car-navigation systems that utilize satellites to feed weather and traffic information to the driver, HD radio embeds the data into the broadcast signal.

The benefit to the consumer? Unlike many competing technologies, this service is free.

Because information is compiled by local radio stations, users can access the most recent and detailed data for their location, Jury says.

“Satellite has to originate from one point and only can provide so much content to any one market,” he says. “AM and FM radio stations serve the area they’re in, so they can provide localized detail that’s hard to deliver on a national level.”

There are limitations, however. A vehicle has to be within range of an HD radio station to acquire the traffic and weather data.

Jury says out of some 6,000 FM radio stations in the U.S., 2,300 have been converted to HD, most of them concentrated in heavily populated areas.

“Generally where we see HD rollout is in major markets, midsize cities and big suburbs,” he says, noting Ibiquity is working on expanding the service to less-populated areas.

The technology also is limited by geography. If a driver is streaming map data from a local HD station, the connection would be lost once the vehicle is beyond the station’s broadcast reach. Jury says Lexus circumvented this issue by developing a hybrid system that automatically funnels data via a smartphone once data from the HD station stops flowing.

“They’ve combined digital radio with smartphone technology,” he says. “They’re the first to deploy it.”

In addition to weather and traffic information, HD radio can provide local sports scores, news headlines and movie times, although Lexus has yet to adopt those features.

HD radio currently is limited to the U.S. market, but Ibiquity is in talks with the governments of Mexico, Canada and several South American countries to deploy the technology.

Further growth is expected in the U.S. as an increasing number of auto makers offer the technology.

Jury says 29 auto makers have announced plans to incorporate HD radio in 150-plusmodels by year-end, with more than 70 models to include the technology as standard.

“That’s a pretty good, deep penetration,” he says. “They all see the value of it.”