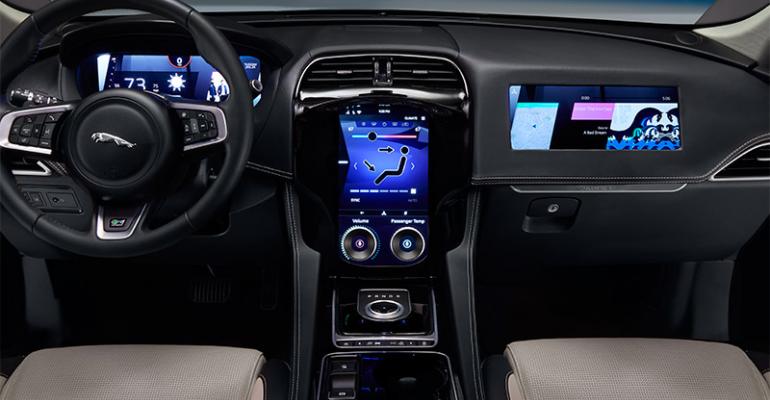 <p><strong>Three reconfigurable 12.3-in. screens can be customized with swipes or verbal commands to display variety of information unique to each occupant.</strong></p> <p> </p>
Vehicles

The drone demo is a way for Mitsubishi Electric to simulate how its latest FLEXConnect.AI infotainment platform is able to run multiple displays from different sources from a single head unit.

NOVI, MI – Not long ago a great automotive user experience meant the touchscreen human-machine interface had decent reaction time and you could pair a smartphone in less than three minutes. But that is oh-so-2015.

Mitsubishi Electric Automotive now is showing off a drone connectivity feature, because who wouldn’t want to launch a roof-mounted drone to check out the road ahead?

“The drone lifts up and acts as a guide when going through the woods. If there is a log in the trail, it can warn the driver ahead of time,” says Mitsubishi Electric UX Expert Jacek Spiewla during an artificial-reality demonstration at the recent TU-Automotive Detroit 2017 conference here.

We sit in a real Jaguar F-Pace CUV parked in a room on the conference show floor where an alternative reality is projected on the walls around us. Our imaginary drive starts at the Hoover Dam and heads to Las Vegas.

The drone’s-eye view can be shown on the car’s three interior displays. Spiewla says automakers are interested in what drones can do for future UX concepts, and they now are asking about urban applications, such as scouting out accidents or traffic bottlenecks.

Of course, there is no real drone above us. It’s just another way for Mitsubishi Electric to simulate how its latest FLEXConnect.AI infotainment platform is able to run multiple displays from different sources from a single head unit and processor, including information coming from Internet-of-Things outside the vehicle. The supplier has been previewing the technology privately since January but just started revealing it publicly in June.

Most traditional infotainment designs require each display screen to use a separate processor which adds complexity, weight and cost, Spiewla says.

To user-experience designers and engineers, this likely is the most important aspect of the new platform. The FLEXConnect.AI system incorporates a multi-display Android user interface, long-term-evolution connectivity with over-the-air update capability, and advanced-driver-assist system integration all on one platform.

What really differentiates this system from the rest of the pack is delivering a high-performance connected-car platform and a customized Android experience that can be quickly reconfigured by multiple users, Spiewla says.

The system’s multiscreen user interface is designed to provide a premium user experience for all vehicle occupants, which is important as vehicles become more autonomous.

The three reconfigurable 12.3-in. (312-mm) screens can be customized with swipes or verbal commands to display a variety of information unique to each occupant, from typical instrument- cluster displays to IoT video feeds or data coming from the vehicle’s ADAS.

Users having confidence in autonomous-vehicle-guidance systems will be crucial to their success in the future, and one way to do that is to show occupants what the car actually is seeing and doing. This system can take real-time data from onboard sensors and fuse that information into a graphic display that will show exactly that, Spiewla says.

But in a pleasant acknowledgment that not all user experiences need to be digital, the FLEXconnect HMI  features two big rotary control knobs on the center stack to adjust volume, temperature or whatever the user would like them to do, because their function can be electronically reconfigured.

Most UX designers say consumers like to have at least a couple of big knobs on infotainment systems for the sake of simplicity.

However, having three or four knobs eats up precious real estate on the center stack. In this case, having only two reconfigurable dials allows them to be large and able to satisfy different preferences.

Another interesting feature is a road trip application. Spiewla holds up a tablet computer to the windshield and scans the view of the Hoover Dam we see outside. The tablet points out areas of interest such as the Arizona spillway and offers detailed information on the dam’s water intake towers and the visitors’ center. “The rest rooms are open 9-5 p.m.,” he says.

Feeling like we’ve already been on the road a long time, we look at our watch and heave a momentary sigh of relief. And then we remember we are in a car sitting in a room at a convention center.

Screening the Future of Interior Design
May 09, 2017