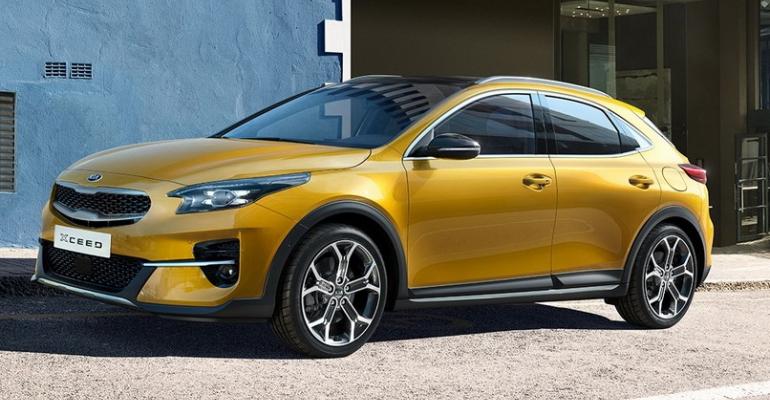 Kia Xceed urban CUV made in Europe for European markets only.
Vehicles

The fourth model in Kia’s range of Ceed C-segment cars will be assembled in Zilina, Slovakia.

MADRID – Taking aim at the European market, Kia will begin building the Xceed CUV, the fourth model in its range of C-cars, later this summer at its plant in Zilina, Slovakia.

The South Korean automaker launched the lineup with the compact 5-door Ceed hatchback, followed shortly by the Ceed Tourer station wagon and then the ProCeed 3-door hatchback.

Kia insists the Xceed is not a compact CUV.

“It only shares with the Ceed the front doors and the wheelbase, but since the front and rear overhangs are 25 and 60 millimeters (1.0 in. and 2.4 ins.) longer than those of the Ceed, the Xceed has a more vigorous image,” says Gregory Guillaume, vice president of design for Kia Motors Europe.

Guillaume says Kia designers did not set out to create a CUV, but during work on the ProCeed, they realized the possibility existed.

The Xceed's front features a prominent grille and larger bottom air intake, and both elements are flanked by newly designed “ice cube” LED lights. At the rear, new LEDs create a slender and technological light signature that, seen from certain angles, extends to the shoulders of the car.

The CUV will be offered in 10 different paint finishes including a new color, Quantum Yellow, which will be exclusive to the model.

The XCeed’s interior shares the same elements and layout as the Ceed, featuring an optional 12.3-in. (31.2-cm) digital instrument cluster and standard 8-in. (20-cm) infotainment display – or optional 10.25-in. (26-cm) display – with Bluetooth connectivity and compatibility with Apple CarPlay or Android Auto devices.

Also available will be two 1.6L Smartstream 115- and 136-hp diesels. Except for the 1.0L T-GDi, all engines can be combined with a 6-speed manual transmission or a 7-speed DCT. Stop/start is standard in all versions.

As in other Kia models, the XCeed will be offered at the end of 2020 with low-emission electrified propulsion systems, such as 48V mild-hybrid and plug-in hybrid versions.