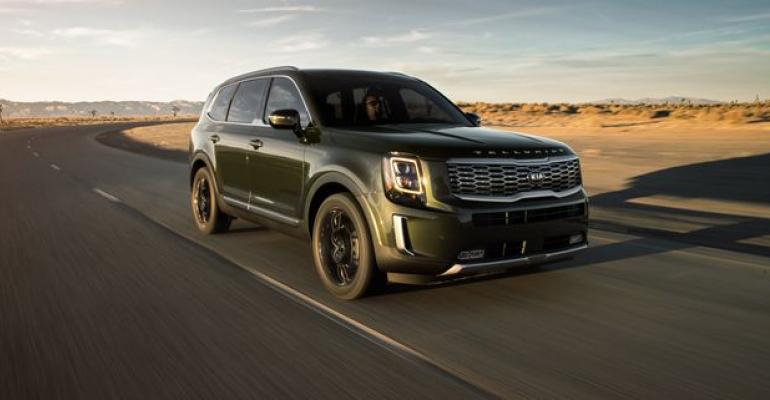 “People are waiting for them to come off the truck,” Kia says.

Kia introduces a new midsize CUV that moves decidedly upscale and is designed to compete against established rivals such as the Ford Explorer, Honda Pilot, Toyota Highlander and Jeep Grand Cherokee.

The Kia Telluride, which is just beginning to arrive in Kia dealerships across the U.S., also gives the South Korean automaker two flagships, Kia officials say, since the K900, the brand’s near-luxury sedan, will remain in the company’s lineup at least for now.

The marketing of the ’20 Kia Telluride got a major push with a Super Bowl ad, which in turn spawned a broad social media campaign, a Kia spokesman says. He notes there already is lots of buzz around the Telluride, which was unveiled at the North American International Auto Show in Detroit.

“People are waiting for them to come off the truck,” he says.

Over the years, Kia has successfully crafted a reputation as a challenger brand by building well-designed cars while earning plaudits for quality and winning customers with economical pricing. Much of that formula is carried over into the Telluride, which sees Kia move upscale beyond its economy-minded roots into one of today’s most competitive spaces in the car business – the midsize CUV segment.

Pricing for the ’20 Telluride, which shares its name with a southwest Colorado resort town, starts at $31,600. The fully equipped version with optional third-row seating we drove cost $45,815 before the addition of $1,045 in destination charges, pushing the Kia brand into new, more expensive territory.

The CUV enters the competitive fray with sophisticated styling, advanced driver-assistance systems, a full suite of comfort and convenience features, and ample room for passengers and cargo.

Inside (below, left), polymer trim pieces simulate wood and metal trim and add to the appeal of the spacious interior, which Kia says has more room than the Chevrolet Tahoe fullsize CUV. Connectivity features include Bluetooth, Apple CarPlay and Android Auto. 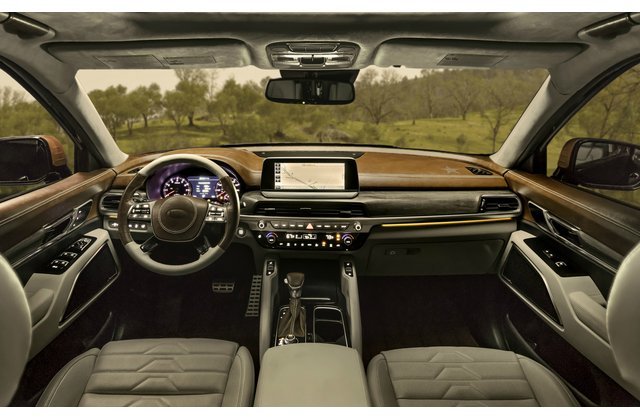 All-wheel-drive, which has become a requirement of many buyers in the midsize-CUV segment, is available on the Telluride.

The Telluride is built at Kia’s plant in West Point, GA.