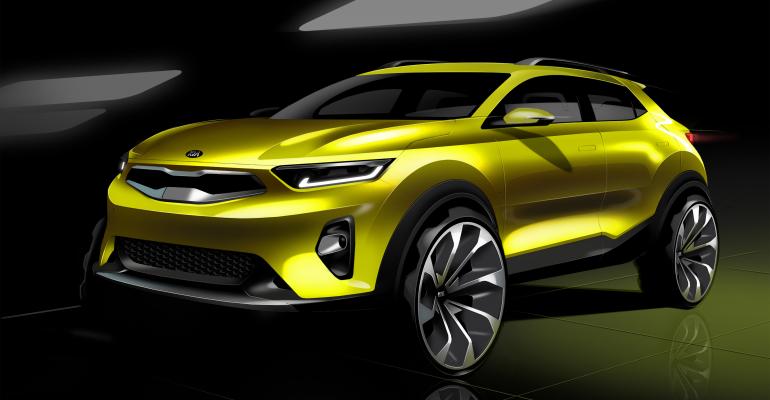 Renderings of the Stonic depict a CUV not greatly different from the Kia K2 Cross variant of the Rio that was shown in April at the Shanghai auto show and has just gone on sale in China.

Kia releases design renderings of the all-new Stonic, a B-segment CUV that will make its European debut in September at the Frankfurt auto show.

The renderings depict a CUV not greatly different from the Kia K2 Cross variant of the Rio that was shown in April at the Shanghai auto show and has just gone on sale in China.

“The Stonic will go on sale in the domestic Korean market and Europe in the second half of 2017,” the spokesman told WardsAuto. “Launch timings or plans for other markets are yet to be confirmed.”

The spokesman declines to say where the Stonic was designed and developed or where the vehicle, which is based on Kia’s Rio platform, will be produced. The platform of the fourth-generation Rio that launched last year was designed by Kia in both Germany and Korea.

Because the Stonic shares the Rio’s platform, it likely is in serial or preproduction status at Kia’s Sohari plant in Korea. Like the Rio, it probably will be produced there and exported to the European market.

The Rio also is produced at Kia’s new plant in Pesqueria, Mexico, so if Kia Motors America opts to sell the Stonic, it likely would slot in the Pesqueria production schedule alongside the Rio.

Exterior styling of the K2 Cross variant of the Rio now on sale in China in many ways mirrors the renderings released for the Stonic, particularly the roofline, body side panels, most of the front end and even the roof railings.

The Stonic as shown in the renderings displays some of the roundness reminiscent of the Rio, but, like the K2 Cross, also seems to have design cues from the new Optima and hot-looking Stinger luxury sports grand tourer.

The Stonic’s tiger-nose grille is refined to give the new entry a sporty, youthful look, which carries throughout all angles of view from front to rear. The low, slanting roof has a built-in low-profile roof rack very similar to that of the K2 Cross. Body side panels are smooth-sculpted below the beltline. Flush-fitting door handles appear to have the same finish as the rest of the vehicle.

The Stonic’s rear end has a new lateral taillamp treatment that seems to be a first for Kia. As shown in the renderings the front and rear bumpers, the low-mounted grille, the inner wheel-well moldings and rocker panels all have a matte black finish that contrasts smartly with a daring yellow topcoat. The black-clad bottom-line moldings also are a feature of the K2 Cross available in China.

Kia in its official release statement hints at many high-tech options and claims the Stonic is “the most customizable Kia ever made, inside and out.” The CUV will have a floating human-machine interface display and control panel.

The release also claims the Stonic “brings compact dimensions and a low center of gravity to the B-Class,” although if it is shown to share the same dimensions as the K2 Cross, then the China variant of the Rio has beaten it to the punch.

Some observers speculate the Stonic will offer the same engines as the current Rio: a 1.0L 3-cyl. turbo;  a 1.4L turbodiesel; and 1.0L, 1.25L and 1.4L 4-cyl. gasoline versions. The Kia spokesman declines to comment on a possible EV version coming down the pike.

Despite the youth-oriented sporty styling, the Stonic (and K2) has a more traditional look than its cousin, the also just-revealed Hyundai Kona B-class CUV. The Kona will be officially unveiled June 13 in Seoul by Hyundai Vice Chairman Chung Eui-sun, the son of Chairman Chung Mong-koo.

Stirring interest in the Stonic doesn’t detract from the high interest worldwide on what will be revealed and said next week about the Kona. But releasing the renderings is Kia’s reminder that it, too, is in the B-class CUV game.

In its news release Kia calls the Stonic name a composite drawn from part of the word “speedy” combined with the full word “tonic.”

In music, tonic is the first and last note of a musical scale. To a wider public tonic means something that boosts the spirits, which might be a better explanation.