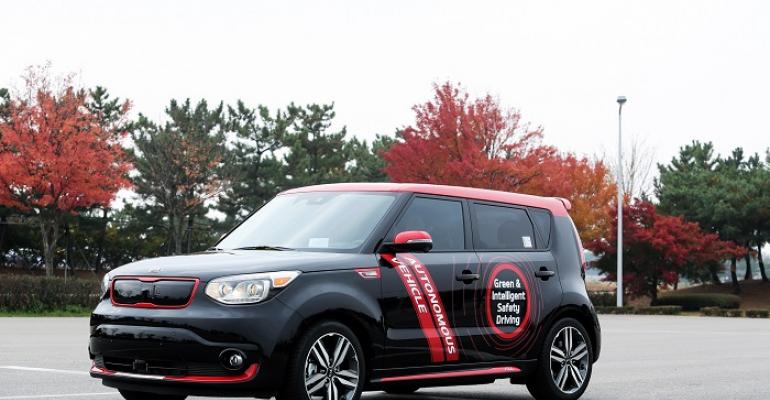 Advanced driver-assistance technologies will fall under the Drive Wise banner, including urban and highway autonomous driving.

Kia will launch advanced driver-assistance technologies under a new sub-brand, Drive Wise, it announces today at the CES 2016 in Las Vegas.

“Drive Wise will enable Kia to introduce intelligent safety technologies to its future model range, helping to eliminate potential dangers – and, for many, the boredom – of driving, while changing the ways in which owners interact with their vehicles,” Kia says in a statement.

It states the technologies to be featured under the Drive Wise moniker still are under development.

The technologies, which Kia first detailed last month, include highway and urban autonomous driving, with the former using radar and cameras and the latter GPS and sensors to navigate roadways; preceding vehicle following, described as an enhanced lane-keeping system that monitors the vehicle in front and keeps a safe distance in relation to it; and an emergency stop system in correlation with Kia’s driver-status-monitoring system, which can detect if a driver takes his eyes off the road for too long and bring the car to a halt in an appropriate side lane.

Other technologies being worked on under the Drive Wise banner are autonomous valet parking, in which a vehicle parks itself, activated via a smart key or smartwatch, and traffic jam assist, which maintains a safe distance from the vehicle ahead during heavy traffic and will move an equipped Kia “into appropriate spaces to gain ground.”

Advanced human-machine-interface technologies inside Kia vehicles also are being worked on, including fingerprint sensors, smart-device connectivity and gesture control, a technology already available in some high-end models such as the new BMW 7-Series.

A cockpit display at CES, I-Cockpit, features the above HMI technologies under the concept of blind control. With the detection of a stored fingerprint or a driver’s smartwatch, a car can automatically set a driver’s preferred temperature, music and displayed information, Kia says.

The Korean brand earlier announced its intention to bring partially autonomous driving technologies to market by 2020 and a fully autonomous vehicle by 2030.

The 2020 introduction will be a vehicle with Drive Wise technologies, Kia says.

In mid-December, Kia was granted a license by the state of Nevada to test a Soul electric vehicle with the Drive Wise technologies on public roads. Hyundai-Kia, parent of both the Hyundai and Kia brands, is investing $2 billion by 2018 on driverless technologies.