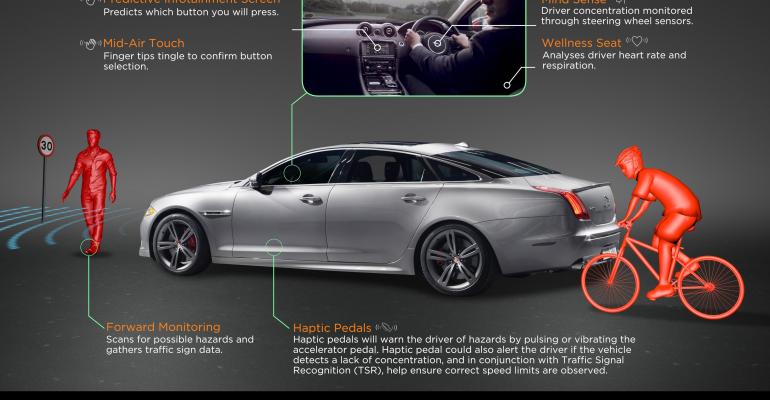 JLR Researchers Getting Inside Drivers’ Heads

Jaguar Land Rover is delving into the brain in a research project aiming to reduce the number of accidents caused by drivers who are stressed, distracted and not concentrating on the road ahead.

The JLR Sixth Sense research projects use advanced technology from sports, medicine and aerospace to monitor the driver’s heart rate, respiration and levels of brain activity to identify driver stress, fatigue and lack of concentration.

The U.K.-based team also is looking at innovations to reduce the amount of time the driver’s eyes are off the road, and how to communicate with the driver through pulses and vibrations from the accelerator pedal.

“We believe some of the technologies being used in aerospace and medicine could help improve road safety and enhance the driving experience,” JLR Research and Technology Director Wolfgang Epple says.

“The car is becoming more intelligent and more able to utilize cutting-edge sensors. These research projects are investigating how we could exploit this for the benefit of our customers and other road users.”

In one key project, the JLR researchers are looking at how to measure brainwaves to monitor if the driver is alert and concentrating on driving.

Even if the eyes are on the road, a lack of concentration or a daydream will mean the driver isn’t paying attention to the driving task.

“They may miss a warning icon or sound, or be less aware of other road users, so we are looking at how we could identify this and prevent it causing an accident,” Epple says.

The basis of JLR’s Mind Sense research is to see if a car effectively could read the brainwaves that indicate a driver is beginning to daydream, or feeling sleepy.

The human brain generates four or more distinct brainwaves at different frequencies. By continually monitoring which type of brainwave is dominant, an onboard computer potentially could assess whether a driver is focused or not.

“If brain activity indicates a daydream or poor concentration, then the steering wheel or pedals could vibrate to raise the driver’s awareness and re-engage them with driving,” Epple says.

“If Mind Sense does not detect a surge in brain activity following the car displaying a warning icon or sound, then it could display it again, or communicate with the driver in a different way, to ensure the driver is made aware of a potential hazard.”

The most common method for monitoring brainwaves is close to the source using sensors attached to a headband, something that would be impractical in a vehicle.

JLR is investigating a method already used by NASA that detects brainwaves through the hands with sensors embedded in the steering wheel. Because the sensing is taking place farther away from the driver’s head, software is used to amplify the signal and filter out the pure brainwave from any background noise.

The automaker is conducting user trials to collect more information on the different brainwaves identified through the steering-wheel sensors and will have neuroscientists verify the results.

Another project being assessed is a system to monitor the well-being of the driver using a medical-grade sensor embedded in the seat of a Jaguar XJ. Originally developed for use in hospitals, the sensor has been adapted for in-car use and detects vibrations from the driver’s heartbeat and breathing.

Epple says as autonomous driving develops, there will be instances when the car needs to return control to the driver. “To do this safely, the car will need to know if the driver is alert and well enough to take over.”

The research team is looking at the potential for a range of driver-monitoring technologies to give the car enough information to support this decision.

“If the car detects severe health issues, or simply how alert the driver is, then the car could take steps to ensure the driver is focused enough on the driving task to take over,” Epple says.

Monitoring the physical health of the driver not only could detect the onset of sudden and serious illness that might incapacitate the driver, but also allow the car to track driver stress levels. This could allow the car to help reduce stress by, for example, changing mood lighting, audio settings and climate control.

The infotainment screen also is getting futuristic JLR treatment with the aim of reducing the amount of time the driver’s eyes are on the screen.

Cameras in JLR’s predictive infotainment screen prototype track the driver’s hand movements and allow the system to predict which button the driver intends to press. This allows the button selection to take place in midair and users wouldn’t have to touch the screen. In user trials, the speed of successful button selection was increased 22%.

The system also could use midair touch to provide the driver with a sensation, known as haptic feedback, that their button selection has been successful. Midair touch uses ultrasonics to create a touch sensation without the skin needing to be in contact with any surface.

The sensations could include a “tap” on the finger or a “tingling” on the fingertips. As touch provides an immediate response to the brain, the driver would not need to glance at the screen for visual confirmation and instead keep watching the road ahead.