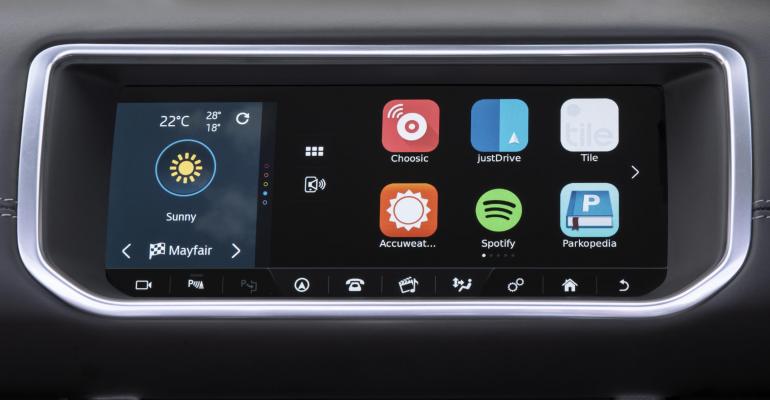 Spotify, which launches this month in Jaguar Land Rover&rsquo;s InControl Apps library, mirrors the Spotify interface users will recognize from their smartphone with touch-and-swipe gestures to navigate content.

WHITLEY, U.K. – Sending a clear signal that in-car entertainment is in the driving seat for automakers, Jaguar Land Rover rolls out the big guns of the rock world by using the Kaiser Chiefs’ frontman to launch its new music app.

Ricky Wilson, lead singer and song writer for the U.K. band, was joined by Elliot Gleave, aka Example, to be the first to try the Spotify app which offers streamed music personalized playlists based on users’ tastes and in-car listening habits.

Both rockers created a Spotify playlist featuring their top driving songs and took to the road in the new Range Rover Evoque Convertible and the Jaguar XE to pitch their playlists against one another.

“I listen to music every day, so it’s important I’m now able to use the app while I’m on the move,” Wilson says. “I respect Elliot’s music tastes – we’d even both included Jamie T – but my playlist was the best by miles.”

Spotify, which launches this month in Jaguar Land Rover’s InControl Apps library, mirrors the Spotify interface users will recognize from their smartphone with touch-and-swipe gestures to navigate content.

Users can swipe horizontally to scroll through menus, which display album artwork tiles, all of which minimize distraction while driving.

“Spotify has more than 100 million subscribers, a proportion of whom drive Jaguars or Land Rovers, so we recognized that Spotify was at the top of our customers’ apps wish list,” says

Peter Virk, director-connected technologies and apps at JLR. “From the beginning we wanted to create a Spotify experience that users would really love.

“The Spotify design team worked closely with us to create the best in-vehicle experience, and have spent many hours with us at our Gaydon headquarters running user studies with our employees. The app is now available in our InControl Apps library, and we will continue to work with Spotify to add new features such as predictive search over the coming months.”