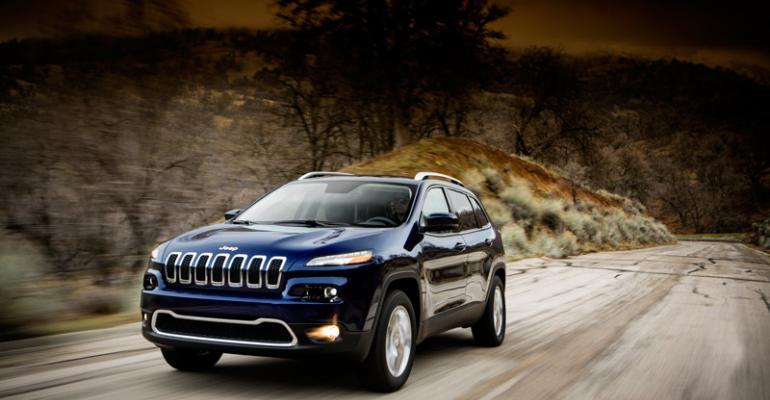 AUBURN HILLS, MI – Beneath a dark cloud of bankruptcy, Chrysler engineers in 2009 nevertheless went to work on new drivetrain technology now featured on one of the new products exemplifying the auto maker’s comeback.

Emerging from the laboratories at Chrysler headquarters here is rear-axle disconnect, which saves fuel by engaging all-wheel-drive only when necessary. It’s an industry first for a 4x4, front-wheel-drive vehicle, engineers say, and makes its debut this year on the Cherokee midsize SUV.

“It presented quite a challenge for us from a 4-wheel-drive perspective,” Joe Kubina, Jeep chief powertrain engineer, tells WardsAuto. “We’ve got big shoes to fill when it comes to providing 4-wheel-drive capability for the new Cherokee.”

The system, which pairs with both 2.4L and 3.2L engine options transversely mounted in the Cherokee, is key to improving fuel efficiency for Chrysler’s customers in the segment. Specific numbers have not been released, but executives have said the Cherokee’s fuel economy is improved 40% over that of the outgoing Liberty.

“We also have regulations coming and fuel-economy requirements that are very stringent,” Kubina says. “How do you provide this great 4-wheel-drive capability and still offer fuel economy and efficiency that’s needed to satisfy your customers?”

The FWD Cherokee launches in Active Drive I, which provides 2WD capability when practical to save fuel by supplying less power to the wheels. Key is the disconnect system that completely disengages the rear driveshaft and hypoid gears, unlike other AWD systems that remain connected and draw power unnecessarily from the engine.

“It will always migrate to 2WD when it feels it can, based on the inputs that the vehicle and the environment are feeding it,” Kubina says.

Active Drive II is engaged when 4WD is required. The vehicle can achieve a crawl ratio of 56:1 for off-roading.

“It’s a mechanical gear reduction that gives you this superior off-road power and creep and crawl ability,” Kubina explains. “When you’re driving off-road, you really want slow, controllable power to the wheels to be able to navigate over obstacles through difficult situations and through low-traction-type situations.”

On top-end Trailhawk-trim Cherokee models, the SUV features Active Drive Lock, which locks the rear axle and allows both rear tires to spin together at the same speed regardless of driving conditions.

“You can put 100% of the power to the wheel (that still has) traction,” Kubina says, noting that only Rubicon versions of the Wrangler and some Grand Cherokee models have the option.

Although the rear-axle-disconnect system went into development four years ago, talk of such technology has swirled among engineers for more than a decade.

Engineers honed in on the ring-and-pinions that take power out of the transmission and send it to the wheels – “a lot of sliding motion, metal on metal. Lots of parasitic losses,” Kubina says of traditional AWD systems.

“Even the act of spinning on highway speeds consumes a tremendous amount of energy.”

Kubina says the system acts pre-emptively, anticipating when the rear wheels are going to need power based on the customer’s driving habits and road and environmental conditions.

“With this system we’ve also introduced the ability to apply 4-wheel-drive torque distribution as a function of how the vehicle is behaving dynamically,” he adds. When the system detects understeer, it applies toque to the specific wheels to keep the vehicle headed in the intended direction.

The adjustments to the then-future Cherokee’s drivetrain were made without aggressive pursuit of a 9-speed transmission, another projected fuel-saver that arrived after Fiat began taking ownership of Chrysler.

While the rear-axle-disconnect system was in place long before the Italian auto maker obtained a controlling interest, adding the ZF-designed 9-speed gearbox proved to be a technological bonus.

The transmission is lighter than the outgoing 6-speed gearbox used in the Liberty and employs dog clutches instead of a conventional clutch. Clutch discs are positioned under the gears to save space, and a gear restrictor engages downshifting in steady driving conditions.

Engineers also say the gearbox has a 9.8:1 ratio spread that allows for high performance in lower gears and increased fuel efficiency in higher gears.

The Cherokee, considered a volume vehicle on a global scale, arrives in this year’s fourth quarter. Engineers promise that, as other midsize SUVs and cross/utility vehicles move toward car-like handling and smaller powertrains, loyalists won’t be disappointed by the Jeep model’s performance.