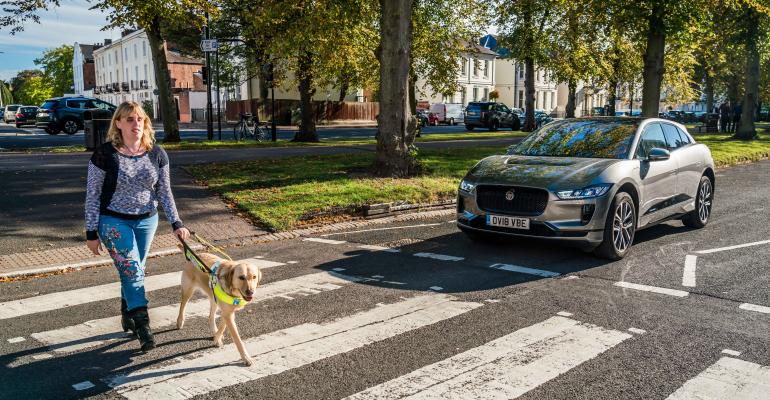 Jaguar engineers initially attempted to create a noise inspired by the sound of sci-fi spacecraft. However, pedestrians reacted by looking up to the sky, rather than at the road, as the new I-Pace electric vehicle approached.

Jaguar had to go back to the drawing board after the audible alert system on its new I-Pace electric vehicle left road users gazing into space.

Jaguar engineers initially attempted to create a noise inspired by the sound of sci-fi spacecraft. However, pedestrians reacted by looking up to the sky, rather than at the road, as the vehicle approached.

But after four years of work, the engineers came up with a unique audible vehicle alert system (AVAS) for the I-Pace, its first EV, that earned the approval of members of the U.K. charity Guide Dogs for the Blind, who were involved in the field trials of the system.

The sound can be heard at speeds up to 12.4 mph (20 km/h) and exceeds the 56-dB(A) minimum required by European legislation – the strictest in the world – for all new EVs effective July 2019.

Jaguar NVH Technical Specialist Iain Suffield says the absence of traditional engine noise from EVs creates a problem for vulnerable pedestrians, such as the blind or visually impaired – especially at low speeds in town centers and parking areas.

“Our potentially life-saving technology cannot be switched off,” he says in a statement.

The soundtrack, Jaguar says, is audible yet discreet and cannot be heard from inside the vehicle.

Engineers tested sounds in several environments, including an echo-free anechoic chamber and various urban scenarios, before settling on the final sound for the I-Pace.

It is emitted from a speaker located behind the front grille and can be heard in every direction. The alert increases in pitch and volume in line with the speed of the vehicle and, when in reverse, it is accompanied by an additional tone that indicates the change in direction.

AVAS is not required at higher speeds as there is enough wind and tire noise for pedestrians to hear the EV approaching.