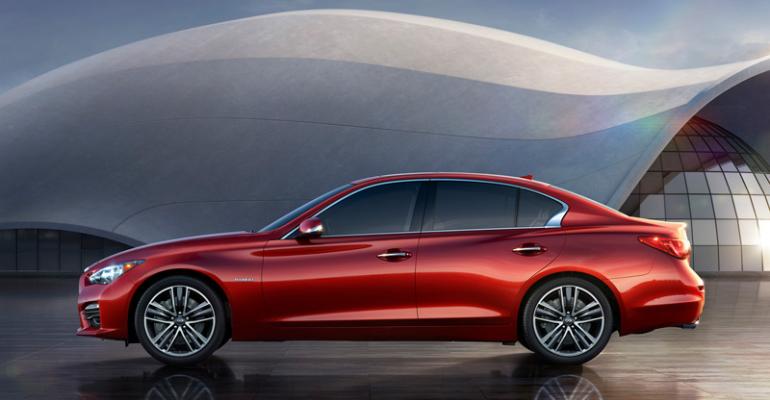 The engine will be mated to an 8-speed automatic transmission shared with Mercedes and built by longtime Nissan gearbox supplier JATCO.

The engine is a design of strategic partner Mercedes-Benz, which uses a similar mill in its current C-Class model.

Infiniti parent Nissan and Mercedes parent Daimler announced the engine-sourcing agreement last year but did not say which Infiniti model would receive the engine. Nissan will build the Mercedes 4-cyl. at its Decherd, TN, plant, although it’s unclear whether Japan-built Infiniti Q50s will receive those units or only C-Class models made at Mercedes’ plant in Tuscaloosa, AL.

“This is part of what’s happening in the global landscape now,” de Nysschen tells media following the Q50’s debut. “With the high cost of development, of vehicles and technology, you see strategic alliances happening all over the industry. It so happens now that Infiniti and Daimler are in such a strategic alliance.

“We remain competitors, but there is potential for component-sharing (and) joint platform development, and all of these are under exploration at the moment.”

De Nysschen says there is no signed deal yet on platform sharing, as the Q50 will use an Infiniti-derived chassis as did its predecessor, the G37.

De Nysschen also announces longtime Nissan and Infiniti transmission supplier JATCO will build an 8-speed automatic gearbox to mate to the turbo 4-cyl., for both Infiniti and Mercedes-Benz. The engine will join, not replace, the Q50’s 3.7L V-6 and hybrid powertrains.

Infiniti also will source a diesel engine for the Q50 from Mercedes, although it is destined for Europe, not the U.S.

“We are reflecting on the U.S.,” de Nysschen says. “There are only so many engines in autos you can bring to one market. There’s a lot of complexity associated with that, so at this moment no decision has been taken on diesel for the U.S.”

The Infiniti chief says the brand hopes to match the G’s record volume in the U.S. of 71,811 sales with the new Q50.

However, he sees challenging the typical 100,000-unit annual volume of the BMW 3-Series, the dominant luxury sport sedan in the U.S., as unlikely.

“It’s not our objective,” de Nysschen says. “We are now prioritizing building our brand. And part of building our brand (is to be aspirational). We have to reflect that in our price position, and we have to also keep supply quite tight.

“We are not chasing volume,” he adds. “We are now creating a powerful platform for the future. I have my sights on 2025, not the end of this year.”