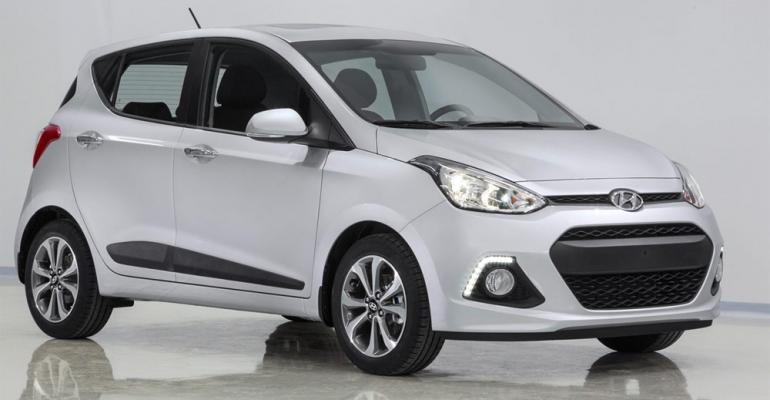 <p> <strong>New i10 bigger than VW Up and Fiat Cinquecento.</strong></p>
Vehicles

Hyundai Ups Ante in City Car Segment With New i10

PORTO CERVO, Italy – Hyundai’s march up the world’s automotive rankings is at full steam with the new-generation i10 model, which is expected to raise the stakes in Europe’s city-car market when it hits showrooms later this year.

The new mini-Hyundai comes with a completely new design, styled to appeal particularly to European buyers and engineered for their expectations in terms of quality, comfort and fuel consumption.

The car will make its public debut at next month’s Frankfurt auto show and will be produced in Hyundai’s joint-venture plant in Izmit, in northwest Turkey.

Designed under the direction of Thomas Bürkleat the Hyundai Europe R&D Center in Rüsselsheim, Germany, the second-generation i10 is challenging the best competitors in the A-segment.

The styling meets with the expectations of Hyundai’s marketing department: modern language in a conservative book.

At launch, buyers will be able to choose between 1.0L 3-cyl. and 1.2L 4-cyl. gasoline engines, but a small diesel reportedly is in the pipeline.

The new-generation i10 marks “another significant step forward,” says Allan Rushforth, senior vice president and chief operating officer of Hyundai Europe. “Every aspect of the car has been designed and rigorously developed to meet the demands and needs of European consumers.”

Production will start in September, three months ahead of original schedules, following an investment of some $630 million.

The annual capacity of the plant, which already produces the new i20 model, is expected to rise to 200,000 cars next year. Once the new-generation i10 goes on sale across Europe, only 10% of the Hyundais sold in the region will be imported.

Almost 95% of the vehicles Hyundai sells in the region are designed, engineered and tested in Europe, and more than 70% are built at its two factories in Czech Republic and Turkey.

Hyundai to Double Capacity at Turkish Joint Venture
May 24, 2012