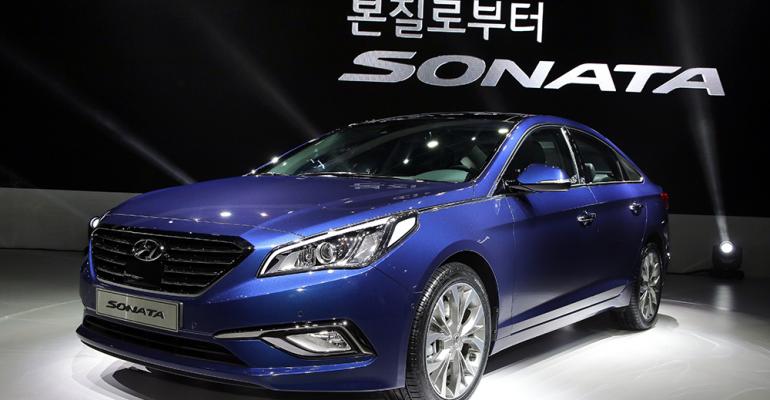 Hyundai: Sonata Doesn't Have to Shout for Attention Anymore

The Korean automaker pulls back on the design of the latest iteration of its midsize sedan.

PARADISE VALLEY, AZ – The new '15 Hyundai Sonata debuted last week in Seoul with more subdued sheet metal, causing some industry-watchers to wonder if Hyundai is shooting itself in the foot by abandoning the current model's flashier looks.

But a top executive says enough buyers now know the brand, so the Sonata doesn't have to wear such an expressive skin.

"Five years ago, when our brand opinion and awareness was fairly low, we had to stand up on a table and say, 'Hey, we're new here, pay attention to us,'" Dave Zuchowski, Hyundai Motor America president, tells media here during a '15 Genesis preview. "We're not at that spot anymore."

With most Americans now familiar with Hyundai, Zuchowski says the brand could ditch the "swoopy lines and curves" that came to represent the '11-'14 Sonata, if not the entire brand.

While some critics considered the current Sonata's design overwrought and in some cases harmful to sales (Toyota North America CEO Jim Lentz once noted it was a key reason given by midsize-sedan shoppers for not purchasing the car), the model quickly changed the fortunes of the fledgling brand and became Hyundai's first 200,000-unit seller in the U.S. in a calendar year.

Zuchowski acknowledges Hyundai benefited from good timing with the 2010 launch of the current-gen Sonata, coming to market when its competitive set was at an advanced age. The Sonata goes up against some of the industry's heaviest hitters, including the Toyota Camry, Honda Accord, Ford Fusion and Chevrolet Malibu.

"There's been a lot of activity in that segment over the last year, but right now, as we bring this car out, most of the new products have been launched and are established, so, again, (there is) good timing where this is coming in," he says.

The U.S. version of the new Sonata debuts in two weeks at the 2014 New York auto show.

The less-striking but more-handsome model, in Zuchowski's view, is being counted on to help woo buyers back to Hyundai showrooms.

As the Sonata has aged – it now is the oldest model in the midsize segment – sales have declined, affecting Hyundai's total U.S. volume.

Sonata deliveries were down 14.9% through March, and Hyundai sales in total were off 2.6%, WardsAuto data shows.

Zuchowski largely blames the harsh winter weather that hammered most of the eastern U.S. in January and February for Hyundai's 2014 shortfall. Nicer weather, and fresh versions of the Sonata and, to a lesser extent, the Genesis should turn momentum around.

Hyundai is calling for 24,000 sales annually of the new Genesis sedan, up from roughly 20,000 with the current model.