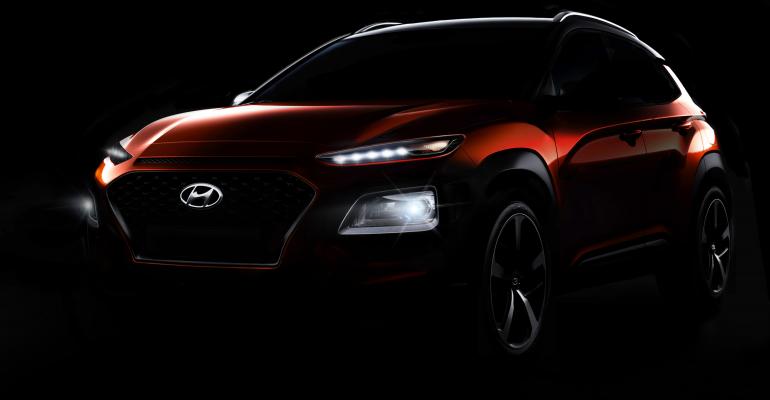 The new B-segment CUV said to have a HUD receiving data from the instrument-panel-mounted central display in super-high intensity, guaranteeing its visibility in all daylight driving situations as well as at night.

Hyundai confirms it will unveil its much hyped and much anticipated Kona small CUV in South Korea on June 13, well ahead of its European debut at the Frankfurt International Auto Show in September.

The new B-segment CUV – a first for Hyundai and which slots beneath the Tucson compact CUV – may be one of the most teased models ever released. Hyundai has released several photos as well as videos, and there have been many spy shots, even spy videos, appearing online.

The broad-shouldered, roomy-looking CUV with aerodynamic surfaces should appeal to the younger buyers Hyundai is targeting in world markets. Sales of the Kona are expected to launch in Europe almost in lock-step with the Frankfurt show.

While it rides on a unibody platform, Hyundai emphasizes the Kona is as capable as an SUV: a little higher than any existing B-segment CUV, but a little lower than most others. It is the antithesis of vehicles produced mainly for urban driving and can take back roads with gusto, Hyundai spokesmen say.

The stacked double headlamps and cascading grille distinguish the Kona’s front from other Hyundai CUVs, while its rear hints of the existing Tucson.

Engines available in most markets likely will be 1.2L and 1.4L gasoline 4-cyl. and a 1.4L diesel mill, according to sources.

As Hyundai is promising the Kona will be a “true SUV,” an AWD variant will be available.

Based on the B-segment i20 platform developed in Russelsheim, Germany, the Kona is packed with electronics to appeal to younger generations.

An optional feature being touted by Hyundai ahead of the domestic debut is a new type of head-up display that should make it a rage among tech-savvy enthusiasts.

Instead of a HUD that projects on the windshield, Hyundai is offering its first-ever commercial application of a separate transparent HUD panel that’s in the driver’s line of sight. It receives data from the instrument-panel-mounted central display in super-high intensity, guaranteeing its visibility in all daylight driving situations as well as at night. The feature is expected to be offered on other Hyundai vehicles as the Kona rolls out.

Kia’s own Stonic small CUV, also based on the i20 platform, will have its European debut at the Frankfurt show as well. Spokesmen aren’t saying whether it will be unveiled before then, like its Hyundai rival.

The Hyundai Kona is said to be having serial production launch problems at the Ulsan plant. According to union sources, Hyundai has opted to have the bumper modules assembled off-site instead of in-house. This enables the company to allocate fewer additional personnel to the plant to produce the vehicle, which has raised the union’s ire.

The union protests that off-site fabrication is a deliberate effort to start outsourcing work from the plant and could become a trend that imperils employment levels.

Hyundai production executives argue that the Kona has design-for-manufacture features that require less labor-intensive production and will enable the company to set pricing at levels that will spur demand.

Some analysts believe Hyundai’s decision to show the Kona early in Korea is to offset published reports about the vehicle production dispute. Others opine that if it doesn’t officially break cover soon, the accumulation of teasers and spy shots won’t leave much to reveal.

Hyundai Motor Europe expects the Kona to be a market slayer in the European Union and the U.K. and doesn’t see interest waning by September when it’s shown to European media and consumers.

Assembled solely in Ulsan, many analysts believe the Kona also will be built overseas, especially in emerging markets, following the pattern set by the Hyundai Tucson C-segment CUV.

The Tucson is assembled around the world either in completely built-up or just-in-time status in Brazil, China, the Czech Republic, Egypt, India, Indonesia, Malaysia, South Korea, Taiwan and the Ukraine.