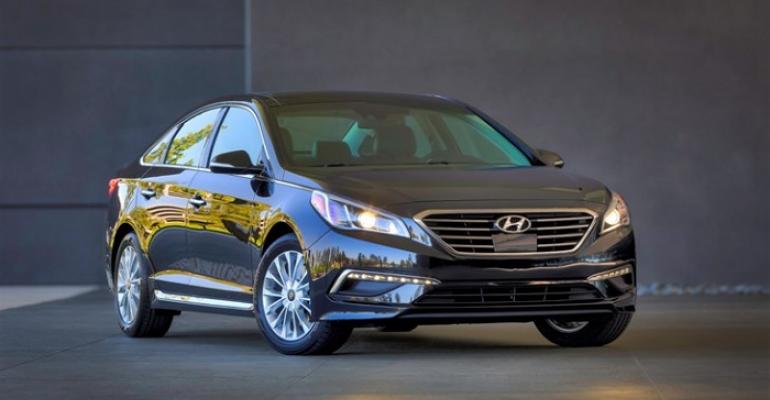 DETROIT – Hyundai is planning a redesign of its Sonata, after the ’15 model failed to capture midsize sedan buyers’ interest as much as was hoped for.

“It’s a very handsome vehicle, (but) it’s not as distinctive as the vehicle it (followed),” Dave Zuchowski, Hyundai Motor America CEO, tells WardsAuto in an interview here during the 2015 North American International Auto Show.

The current Sonata, launched last summer, has a quieter appearance than the ’11-’14 Sonata, which wore Hyundai’s showy Fluidic Sculpture design language and became the automaker’s  first model in the U.S. to sell more than 200,000 units in a calendar year.

In April of last year, Zuchowski told media Hyundai didn’t have to “stand on a table” anymore in terms of styling, because it thought it had firmly established itself as a midsize sedan that had become top-of-mind for buyers, in the same way as the Toyota Camry and Honda Accord.

The Camry and Accord, the No.1 and No.2 best-selling midsize cars in the U.S., never have been known for their flashy exteriors, although Toyota is trying to change that with the Camry’s ’15 refresh.

But Hyundai soon discovered not having a distinctive appearance, and one similar to Camry and Accord’s, resulted in it having to incentivize the new Sonata more than expected to move the car off dealer lots.

“If we’re priced comparably, and we appear comparable, it’s always difficult to win that battle with those more well-established, well-entrenched (models),” Zuchowski says.

He notes the new Sonata is selling well with brand loyalists, but Hyundai is not getting the conquest buyers it did with the old model.

“I told the story to our parent company (of driving the old Sonata) home, (and) people were rolling down their window at stop signs, following me, (asking), ‘What is that? Where can I get it?’

“And I don’t get that” with the new one, Zuchowski continues. “That was free advertising, right? People would seek us out because we look different. And we don’t get that now.”

The redesign of the current Sonata will coincide with the car’s midcycle refresh, which should be in the ’17 or ’18 model year, as WardsAuto’s Product Cycle Chart indicates a next-generation Sonata due in ’21.

“It’s hard to get anything (done sooner) than midcycle with the tooling involved,” Zuchowski notes, adding Hyundai knows “exactly what we want to do, and we’re busy working on it right now.”

He calls the experience of pulling back on the design of the car an important future lesson for product development.

“The more important thing is to understand we always need to keep our styling edge. We can’t let ourselves get closer to the pack.”

Hyundai: Sonata Doesn't Have to Shout for Attention Anymore
Apr 04, 2014