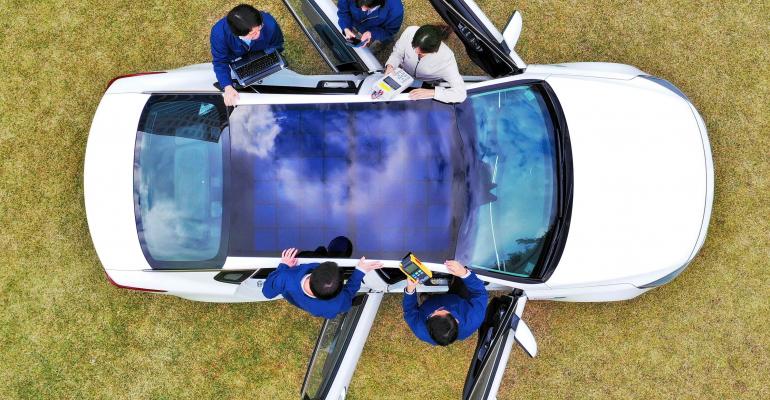 Electricity-generating solar panels will be incorporated into the roof or hood to support the vehicle’s main power source, improving mileage and reducing carbon-dioxide emissions.

Electricity-generating solar panels will be incorporated into the roof or hood of vehicles. The first generation of the technology will be available after 2019.

The technology is being developed to support the vehicle’s main power source, improving mileage and reducing carbon-dioxide emissions.

The system will be able to charge the batteries of eco-friendly electric and hybrid vehicles, as well as those of internal-combustion engine (ICE) vehicles.

The first-generation system is for hybrid vehicles, while the second-generation technology is for ICE vehicles. The third generation will see the introduction of a lightweight solar roof for battery-electric vehicles.

In the first-generation system, silicon solar panels will be integrated into a standard car roof. The system can charge 30% to 60% of the battery over the course of a normal day, depending on weather conditions and other environmental factors, Hyundai says.

The second-generation semi-transparent solar roof will be applied to ICE vehicles. The technology can be integrated with a panoramic sunroof, letting light into the cabin while charging the vehicle’s battery.

The third-generation system, now undergoing testing, is designed for the hood and roof of battery-electric vehicles.

The solar charging system is made up of a solar panel, a controller and a battery. As the panel absorbs photons of light from the sun, it creates electron-hole pairs in silicon cells, allowing the current to flow and generate electricity.

The controller manages voltage and current to increase the efficiency of electricity harvested by the solar panel. This power is converted and stored in the battery or is used to lower the load on the vehicle’s alternating-current generator.

The developer of the technology, executive vice president-Engineering and Design Jeong-Gil Park, says he expects to see many different types of electricity-generating technologies integrated into the group’s vehicles.

“The solar roof is the first of these technologies and will mean that automobiles no longer passively consume energy, but will begin to produce it actively,” Park says in a statement.