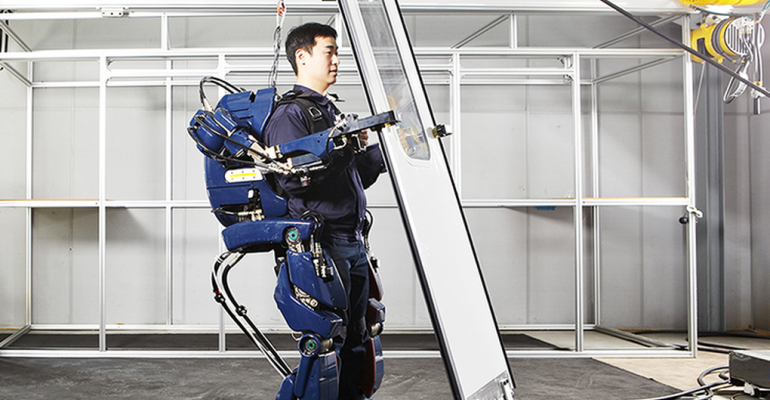 The warehousing industry and the military are potential mass-production markets. Hyundai says a soldier wearing the suit easily can carry 100 pounds yet move very quickly. A possible medical application would give impaired patients mobility.

Fans of the “Iron Man” movie franchise, listen up: Hyundai says it is developing a so-called robot suit that increases by 800% the wearer’s muscle strength for major moving and lifting functions.

Until now a secret research project, Hyundai says on its Hyundai Group Korean blog the lightweight suit has commercial potential and there is a plan to put it into production.

Sources say Hyundai Motor, with support from some of its affiliate companies, has been developing the wearable robot at its combined Hyundai-Kia R&D Center in Namyang and Hyundai Mobis research laboratories in Korea.

Possible mass-production markets would be in the warehousing industry and the military. The blog says a soldier wearing the suit easily can carry 100 lbs. (45 kg), yet move very quickly.

Hyundai also is looking into possible medical applications to give mobility to impaired patients.

Hyundai has not released any specifics on the wearable robot such as weight, cost, production location or when it might be marketed.

The blog notes the suit somewhat resembles the robots used in the 2008 blockbuster hit movie, “Iron Man,” which was followed by two sequels and whose alter ego Tony Stark, played by Robert Downey Jr., appears in “Captain America: Civil War” currently in theaters.