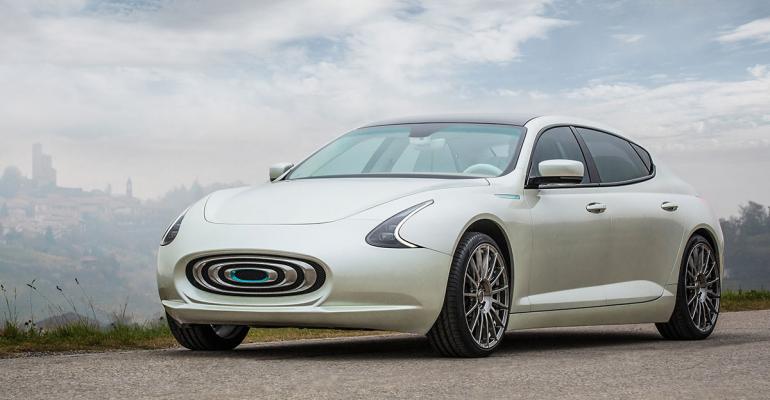 Thunder Power has filed more than 350 patent applications in the U.S. and China, and 70 have been granted, CEO Wellen Sham says. Among them is a lightweight modular chassis system.

SHANGHAI – Thunder Power, a Hong Kong-based electric-vehicle startup, proclaims an ambitious goal: to make the most desirable EV in China.

“An obvious difference between us and (U.S. EV maker) Tesla is we have the key technologies before actually investing in manufacturing,” Wellen Sham, Thunder Power CEO, tells WardsAuto at a launch event in Shanghai.

Thunder Power has filed more than 350 patent applications in the U.S. and China, and 70 have been granted, Sham says. Among them is a lightweight modular chassis system, that allows flexibility in the design of future car models, making development and assembly faster and more cost-efficient.

“We are the world’s first company that got this modular-chassis patent,” Sham says.

Along with the chassis system, the company has developed innovative, patented battery- and thermal-management systems. Thunder Power claims its battery-management system allows a range of 397 miles (650 km) compared with the 335 miles (539 km) offered by Tesla’s Model S 100D which launched in January.

“If we want consumers to buy our car, it would be better to keep current consumer habits as much as possible. Our battery life is almost the same as the traditional gasoline-powered cars,” Sham says, adding such a range easily could beat “range anxiety.”

Thunder Power is planning to release 20 pre-production cars for one year’s testing in the southern and northern hemispheres starting in November.

“Aside from battery life, a major challenge for EVs is temperature. We want to make sure of a stable performance even in extreme temperatures,” Sham says.

Climatex testing is vital for the Chinese market, where winter temperatures drop as low as -22˚ F (-30˚ C) in the country’s northern reaches. Thunder Power also plans to sell cars in the Middle East, anticipating the region increasingly will welcome EVs that can tap into a fast-growing number of solar-powered charging stations.

But the current focus, Sham says, is to supply the Chinese market, including Hong Kong, Taiwan and Macao, from a plant in Ganzhou in Jiangxi province. A joint venture between Thunder Power and the local government of Ganzhou, the facility’s construction and commissioning is funded with RMB7.5 billion ($1.1 billion) from a local investment fund backed by China’s national development and reform commission.

Thunder Power’s own investment has been in securing its 10 core patents valued at RMB1.3 ($187 million). Thunder Power also will be in charge of the daily management of the facility.

“We will fully support Thunder Power at all levels, because we want the world to know that Ganzhou has the ability to manufacture such a high-end, high-tech electric car,” says Chen Shize, chairman of the investment fund.

The facility, complete with modular assembly lines and painting lines from the German engineering company Durr, is scheduled to start mass production in third-quarter 2018. Priced at about RMB500,000 ($73,300), the car, designed by a Thunder Power team in Italy, will be officially unveiled in September at the Frankfurt auto show.

One benefit for Thunder Power is that EV buyers in China can receive subsidies from local and central governments. However, China recently cut the maximum level of such subsidies to RMB65,000 ($9,600) from the previous RMB110,000 ($16,100) and plans to eliminate subsidies altogether by 2020.

Sham is not bothered by this policy, saying, “If a company or a product relies on government subsidies to survive, I say it has no future at all.”