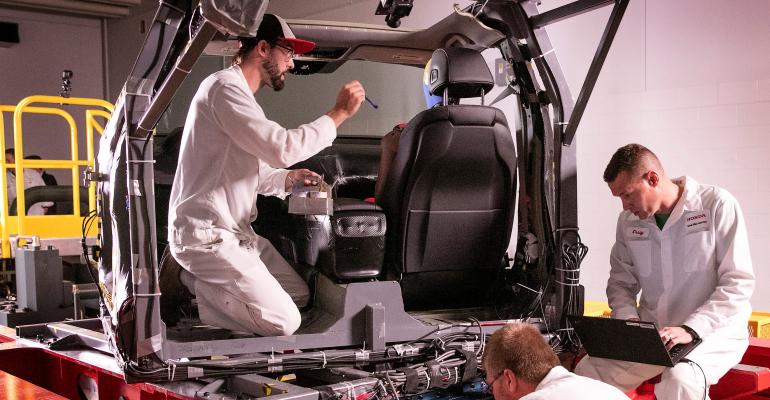 Honda’s safety research, which requires a broad range of analytical tools, computer simulations, crash tests and the handling of crash-test dummies fitted with sensitive instruments, has made the automaker’s vehicles safer.

RAYMOND, OH – The room is vast, with space for the cubicles of hundreds of engineers working to make Honda’s cars, trucks and utility vehicles safer.

The commitment of engineering resources is part of Honda’s underlying philosophy of “Safety for Everyone,” company representatives say as they guide a group of reporters through the automaker’s 1.6 million-sq.-ft. (148,640 sq.-m) research center here, a short distance from its big assembly complex in Marysville, OH.

The R&D center in Ohio plays a key role in the development of vehicles ranging from the 10th-generation Honda Civic to the Honda Ridgeline and Honda Passport and powersports products made in North America for domestic and export markets. It also coordinates with suppliers and provides technical assistance to Honda’s manufacturing teams.

But Bryan Hourt, chief engineer for safety strategy and planning, says much of the center’s work on product engineering, prototype development and testing emphasizes safety. Consequently, the center has built up “deep expertise in personnel” who have spent years working on safety-related projects that improve collision mitigation and pedestrian safety, he says.

The effort, which requires a broad range of analytical tools, computer simulations, crash tests and the handling of crash-test dummies fitted with sensitive instruments (below, left), has made Honda vehicles safer. It’s also won the heartfelt thanks of customers, documented in letters to Honda’s engineers, who believe they or their families survived severe accidents thanks to the engineers’ work.

One Honda project is a new passenger-side front airbag designed to better protect occupants in frontal collisions, including offset crashes between vehicles. Honda developed and tested the technology in partnership with Autoliv, one of the company’s safety-systems suppliers.

Honda plans to begin applying the airbag design, which is modeled after a baseball catcher’s mitt and tucks the occupant into a broad pocket, to new products in the U.S. in 2020.

Unlike conventional airbag systems that rely on a single inflatable compartment, the new system has four major components: three inflated compartments – a center chamber and two outward-projecting side chambers that create a wide base across the dash – along with a “sail panel” that stretches between the two side chambers at their outermost edge.

As with a catcher’s mitt, the sail panel catches and decelerates the occupant’s head while also engaging the side chambers, pulling them inward to cradle and protect the head, mitigating the potential for injury, Honda says.

The next-generation airbag is designed to reduce the potential for injuries that can occur in a wider range of frontal impacts. It is particularly beneficial in offset crashes in which lateral collision forces can cause an occupant’s head to rotate severely or slide off the airbag, increasing the chance of serious injury, according to the automaker’s safety experts.

“This new airbag technology represents Honda’s continuing effort to advance safety in a wider variety of crash scenarios and reflects the innovative thinking that our engineers are bringing to the challenge of reducing traffic injuries and fatalities,” says Jim Keller, president-Honda R&D Americas. “Guided by Honda’s ‘Safety for Everyone’ commitment, our engineers recognize that their work on this type of breakthrough safety technology will have far-reaching effects on peoples’ lives for many years to come.”

Meanwhile, the automaker is continuing to roll out its Honda Sensing and Acura Watch suites of active-safety and driver-assist systems with technologies including forward-collision braking and pedestrian detection.

The systems used in Honda Sensing and Acura Watch can significantly reduce the likelihood or severity of a collision and serve as a bridge to highly automated vehicles of the future, Honda says.

The automaker is targeting 2020 for the deployment of vehicles with highly automated highway driving capability and 2025 for the technological achievement of SAE Level 4 automated vehicles for personal use, a spokesman says.