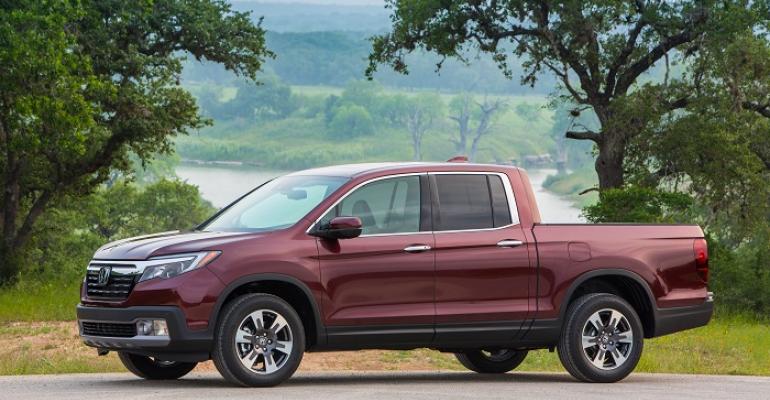 The pickup&rsquo;s best annual volume was 50,193, but Honda manufacturing capacity may need to be adjusted to keep that figure consistent.

SAN ANTONIO – Improved fuel economy, traditional truck styling and improved ride and handling is giving Honda confidence it has hit upon the right formula for its second- generation Ridgeline pickup.

The brand’s U.S. chief hopes these attributes also someday can lift the unibody midsize truck to the first-gen Ridgeline’s high-water mark of 50,193 in annual sales.

The first-generation Ridgeline hit that pinnacle in 2006, one year after its release, but demand dropped off in the latter half of the last decade and trickled to 13,389 in 2014, when Honda stopped production of the first-gen model.

While Honda currently has unspecified “modest (sales) expectations” for the Ridgeline, Jeff Conrad, group vice president-Honda Div., asks, “If we did 50,000 of the old one, could we start to approach that number?

“We could come close to that, but we’d certainly have to look around at what our capacity is.” Honda already is constrained at its Lincoln, AL, plant building the Honda Odyssey minivan and Honda Pilot and Acura MDX CUVs. The hot-selling Pilot’s days’ supply was a slim 25 at the end of last month, WardsAuto data shows, well below the 71-day industry average for light trucks.

The automaker will begin sourcing the MDX from its East Liberty, OH, plant early next year, but hasn’t said how many units will shift to Ohio from Alabama.

Honda assembled a record 363,419 units at the Lincoln plant in 2014 and built 349,703 vehicles there last year. Straight-time capacity for the plant is 350,000, so if Pilot and Odyssey production continues at the current pace, extra capacity, or a complete shift of the MDX to Ohio, likely would be necessary to support 50,000 annual sales of the Ridgeline.

The long wait for another version of the unibody truck was the result of the economic downturn of 2008 and 2009, when most automakers halted development of niche models and prioritized high-volume sellers.

Ridgeline Chief Engineer Kerry McClure is happy a pre- downturn concept was shelved, calling it an overreaction to negative consumer feedback over the first-gen model. The truck also is being released at a better time, when there is a lot of focus on the midsize-pickup segment thanks to fresh competition, he says.

For the second-gen model, Honda nevertheless sharply tones down the aggressive, Tonka-truck-like appearance of the original Ridgeline.

In consumer and dealer surveys the negative cited most often was the vehicle’s too-odd-for-the-segment styling. A relatively short bed, old technology and scratching of the color-coated composite bed during even light-duty hauling were other gripes.

The new Ridgeline, barring the rounded front end, is squarer, with the first-gen’s massive single side-panel stamping replaced with a 2-piece panel, creating a sharp corner instead of a curve where cabin meets bed.

Because the Ridgeline’s wheelbase has grown 3 ins. (76 mm), McClure says a single stamping would be too large to manufacture and, due to steel-formability issues, would require another curve at the cabin/bed meetup point.

The bed-scratching issue has been solved with color embedded into the composite mixture, McClure says, while a slew of advanced safety technology, as well as Apple CarPlay and Android Auto, is available.

Honda is claiming several class-leading stats among the midsize-pickup competitive set, including under-seat storage in the rear (due to a unibody-typical flat floor), passenger volume, bed width between wheelhouses (more than 4 ft. [1.2 m], enough to accommodate a standard plywood sheet) and fuel economy.

One-Third of Buyers to Opt for FWD

To woo buyers in warm-weather states, Honda for the first time offers a FWD Ridgeline, with an expected 30% take rate.

Some 80% of vehicles sold in California, the state with the highest rate of new-vehicle sales annually, are 2-wheel drive, Honda says, as are 66% of Toyota Tacomas sold there.

Conrad expects more consistent marketing will help keep Ridgeline sales from sinking as they did from 2007 through 2014.

Honda is targeting the 175,000 original Ridgeline owners with the new model, while also expecting conquest sales coming from other pickups as well as SUVs and CUVs.

The ’17 Ridgeline goes on sale in June, ranging from $29,475 for a base FWD RT grade to $42,870 for an AWD Black Edition grade. Neither price includes a $900 destination and handling charge.