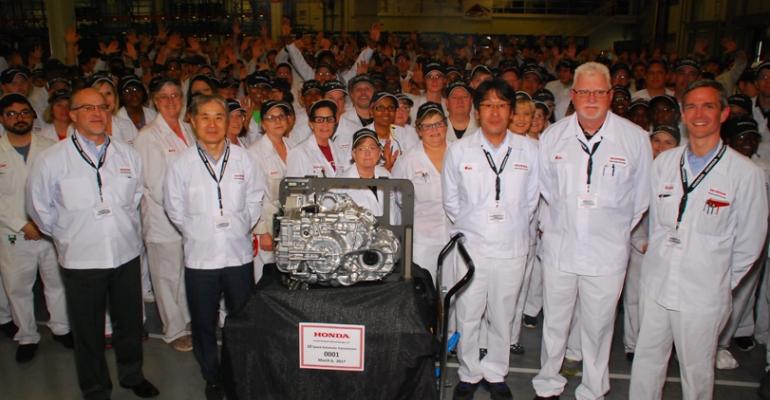 The new 10-speed automatic is destined for wide application within Honda&rsquo;s U.S. lineup, including the next-generation Accord sedan and most Acuras, WardsAuto forecasts.

DETROIT – The two upper grades of the ’18 Honda Odyssey minivan get what the Japanese automaker is billing as a world-first front-engine, front-wheel-drive 10-speed automatic transmission.

While Honda has announced the 10-speed’s placement only in the Odyssey, WardsAuto/AFS forecasts it will be used in the next-generation Accord midsize car debuting this year, as well as Acura’s RDX and MDX CUVs, Acura TLX and RLX sedans, and the Honda Pilot CUV and Honda Ridgeline compact pickup in coming years.

Most of those models currently use a 9-speed automatic by ZF, as will the lower grades of the '18 Odyssey.

Honda’s 10AT is notable as being the first planetary automatic transmission manufactured by the automaker, officials from the company say at the 2017 SAE World Congress Experience here. The 10AT is a 100% in-house design and development, Tom Sladek, principal transmission engineer for the new Odyssey, tells media here.

Honda calculated over 1 trillion combinations of planetary and engagement elements, he says, to arrive at a 10-speed auto with four planetary sets and seven engagement elements. That combination was best able to achieve the efficiency, drivability and packaging Honda was aiming for in the new front-drive minivan. (Ford and General Motors have co-developed a 10-speed automatic for rear-wheel-drive models.)

To make a compact structure that would fit between the minivan’s frame rails, Honda is using a 2-way clutch, which combines a 1-way clutch and a wet clutch into one mechanism. “The benefit of that is a 0.04-in. (25-mm) reduction in packaging, and by eliminating the wet clutch we also eliminate the parasitic losses associated with that,” Sladek says.

The transmission also has an integrated internal/external gear, with an outer gear wrapped around a ring gear on one of the planetary sets.

The 10AT has a ratio coverage of 10:1. A benefit of that is additional driving range with the higher gears on the low end. “Taking a typical example of driving 70 mph (113 km/h) on the interstate, we were able to drop the cruising rpm from 1,900 to around 1,500,” Sladek says.

A lower cruising rpm also makes for a quieter cabin, a key development point for the Odyssey given its in-vehicle microphone that allows a driving parent to be better heard by their kids seated in the second and third rows.

There’s also more low-end driving force for improved low-speed acceleration, he says, adding at mid-driving speeds, upshift and kick-down times are significantly reduced with the 10AT compared with the 6AT in the current Odyssey. The 6AT remains the standard transmission in lower grades of the ’18 model.

Honda’s 10-speed auto has clutch-to-clutch shifting between all gears, with a double-downshift available so a driver can jump down quickly. A 4-gear direct downshift also is available, from tenth to sixth gear and seventh to third.

“So depending on your driving situation you can take a combination of a double and a 4-gear direct downshift,” he says. “And looking at a typical example of merging into traffic, you're able to go from ninth to seventh and then seventh to third. We’re able to achieve that 750 milliseconds faster compared to a conventional 6-speed automatic transmission.”

Honda will assemble the Odyssey’s 10AT at its Tallapoosa, GA, transmission plant. While it won’t be manufactured overseas, the models it is destined for will be exported from North America, Sladek says.

The automaker announced last month it is investing $100 million in the transmission program at the Georgia plant and another $49 million at its Russells Point, OH, transmission plant.