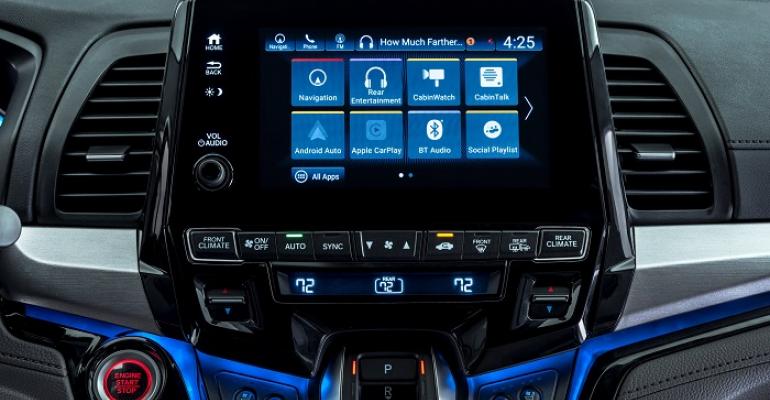 Voice recognition is simplified and faster, while the display audio system has smartphone-like functionality.

If you’ve ever searched through touchscreen menus, fruitlessly trying to find a function, or slogged through voice-recognition system prompts, you can understand why many new-vehicle buyers don’t use infotainment features.

Responding to these frustrations, Honda has revamped the functionality of its infotainment offerings, launching updated display audio and voice-recognition systems in the ’18 Odyssey minivan, going on sale this spring in the U.S. Pricing has yet to be announced.

Simplifying included removing commands that control climate (for example, “turn up temperature to 72 degrees,” as research found owners of other Hondas with the feature rarely used it) and minimizing the times a user has to hit the talk button.

However, the talk button still can be hit to interrupt spoken prompts.

“It is not a full Siri or Alexa-type voice recognition (as) that requires powerful servers we cannot obviously fit (in the Odyssey), but you are able to start rattling off full addresses when you get to that section,” he says, a change from having to speak the house number and street and city names individually.

In a test, WardsAuto asks the system to find our office in Michigan, which it does quickly. Honda is using a “much-improved” voice-recognition engine toward that goal, he says.

Simplifying address search was important, as research shows finding a location is the No.1 input to many voice-recognition systems.

These updates to the voice-recognition system also are being made on a running basis to older Hondas with the technology.

The Odyssey’s display audio system gets revamped as well, with higher levels of customization a key change.

Like with a smartphone, apps can be moved and rearranged, or hidden from the touchscreen, Adelman says, demonstrating this by dragging various icons.

“Say you never use Bluetooth audio connection (because) you’re a USB user or you use Pandora – you can start to hide apps,” he says.

If a user suddenly wants to use Bluetooth audio, he or she can place the app back on the home screen by accessing an “all apps” list and checking a box.

The display audio system also ups the number of onscreen shortcut buttons from two to three, and all three now are customizable. “So you can decide what three features you want to have constant access to, and you can put them anywhere,” Adelman says.

He calls “hidden gems” the display audio system’s advanced quick-select features, giving users the ability, for example, to change their audio source from FM to SiriusXM without leaving the navigation screen. 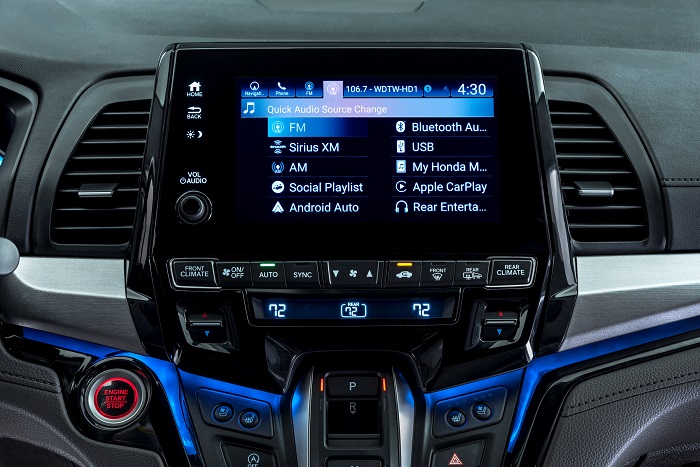 By utilizing a modified version of the Android operating system, display audio also is more updatable and upgradeable, meaning a user no longer has to go to the dealer for updating, a requirement of the current display audio system.

An update can be downloaded to a USB stick, via WiFi from a home network, or for those opting for the Odyssey’s data plan, directly to the head unit via 4G LTE.

While the display audio system mimics smartphones in many ways, there are some differences.

Users cannot move an app onto a new screen like with Apple’s iPhone operating system. “We don’t want to create this odd situation where you have one app on one screen, one on the next, and eight on the third – we’re more about quick switching,” Adelman says. Eight apps are available per screen with the Odyssey’s display audio system, and apps are color-coded by topic (blue for Bluetooth, red for navigation, purple for rear-seat entertainment, green for phone and SMS messaging) for fast identification.

Menu structure and control of the gauge-cluster display also got a rethink by Honda.

The steering-wheel controller in Honda’s current display audio-equipped vehicles is 4-way, but in the new Odyssey, selections in the gauge-cluster display menu only can be made vertically, by moving the plus-sign-shaped button up or down. The left and right sides now are dedicated to audio vs. menu selection. “When you’re in the menu, these don’t become left and right ever,” he says.

But the infotainment piéce de résistance for parents may be the Odyssey’s increased spying capabilities, thanks to the available CabinWatch camera and CabinTalk microphone. With the former, parents can see on the touchscreen what the kids are up to in both the second and third rows by zooming in on a live camera view of the rows, while the latter allows mom or dad to get the attention of zoned-out kids watching a movie. 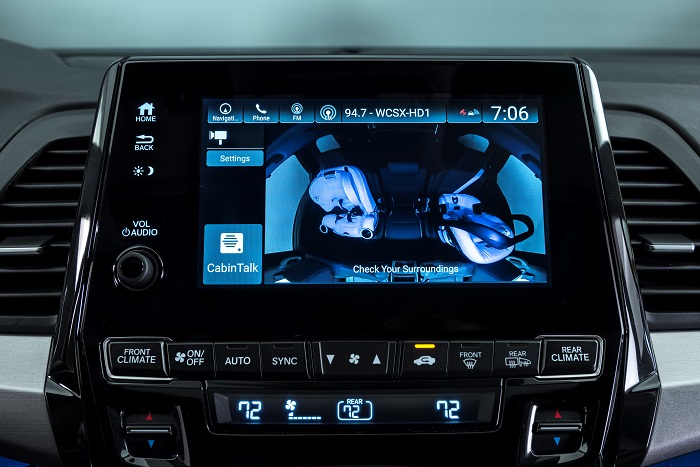 “We liken it to a PA system on an airplane,” Adelman says, noting mom or dad can pipe their voice to speakers in the second and third rows at the same time, or just one row at a time. The microphone works when kids are wearing wired or wireless headphones, as well.

Like the display audio system, the rear-seat entertainment (RES) apps, such as an ‘Are We There Yet?’ game, are updatable via WiFi or 4G LTE, although users cannot add new apps at will so the Odyssey stays family friendly, says Adelman.

The Odyssey’s RES also has Blueray capability, as well as an HDMI port to plug in an external device such as a videogame console.