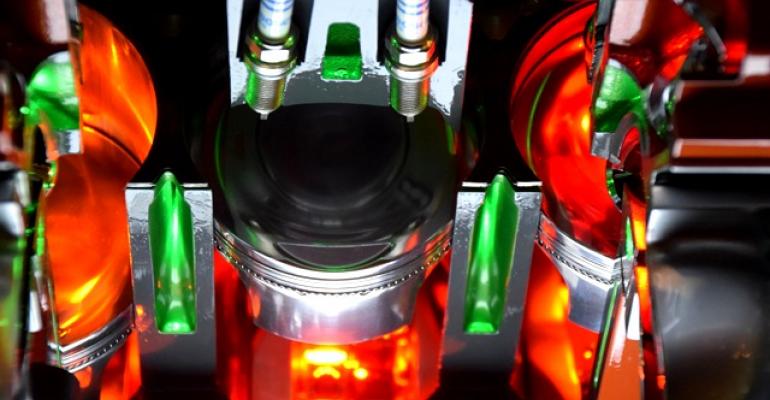 AUBURN HILLS, MI – An engine that almost never stops consuming fuel while generating 707 hp in the 2-door Dodge Challenger SRT Hellcat and the 4-door Charger creates extreme internal loads that can cause catastrophic failures if not offset properly.

Bulkheads in the block needed stiffening. Additional cooling was vital. Alloy pistons had to be forged (like those of the SRT Viper) for additional strength rather than cast. Fuel lines needed to be bigger. Crushed diamonds were embedded in steel washers to deliver the necessary friction to power the supercharger.

It’s because of this painstaking attention to detail that Chris Cowland, Chrysler’s director-Advanced and SRT Powertrain, grows prickly when defending the validity of the horsepower and 650 lb.-ft. (881 Nm) torque rating.

“If you see any of this crap in the press that it’s not a 707-hp engine, it’s absolutely untrue,” he says. “SAE (officials) were here; they witnessed it. No one should be doubting that’s the real number.”

Most blocks for new engine programs today are made of aluminum. The Hellcat, which is machined and built in Saltillo, Mexico, requires cast iron.

“It’s important to keep the bores as round and cylindrical as we can, and an iron block really helps in that respect,” Cowland tells journalists during a Hellcat deep dive here.

“If we switched from iron to aluminum, we couldn’t get the bulkhead stiffness we need under those firing loads,” he says.

“Of course, we can redesign the engine to run under aluminum, but we would have to spread the bore centers and would have to change lots of things within the engine. We always started this program with the premise that we wanted it to be based on the Hemi architecture.”

The high loads result from a 1,595-psi (110-bar) firing pressure in the cylinder at peak power. “Do the math, and that’s 93 kilonewton or 21,000 lbs. (9,526 kg) of load,” Cowland says. That’s the equivalent of piling 4.5 Challenger SRT Hellcat coupes on the piston every time the twin spark plugs ignite the air-fuel charge.

“They’re the loads that go through the connecting rods, through the pistons, down into the crank train, through the main bearings and get reacted in the cylinder block,” he says.

The basis for the Hellcat was the current 6.4L naturally aspirated Hemi (codename Apache), but that engine has a longer stroke of 3.72 ins. (94.6 mm). The Hellcat has a 3.57-in. (90.9-mm) stroke (and loses some displacement) because the team needed to stiffen the crankshaft to accommodate the heavy loads.

“The reduction in stroke was based around increasing stiffness of the crank,” Cowland says.

The alloy crankshaft is made from the same forging as in the Apache engine, with a number of modifications. For instance, bearing profiles are unique to the Hellcat.

“Some people ask, ‘Can I just run an Apache long-stroke version of the crankshaft?’” The answer is no. “Even down to micron levels, there are changes in this crank that are necessary to withstand the really high peak firing pressures and loads we have.”

The Hellcat and Apache blocks appear to be identical. But flipping them over reveals significant changes to the Hellcat unit to incorporate additional cooling galleys to help stabilize the block at high engine speeds.

Computer analysis revealed high thermal loadings atop the cylinder would cause the shape of the cylinder bore to distort, breaking down oil on the bore walls. “So we flow increased coolant and get improved cooling around the top of the bores,” Cowland says.

The Hellcat program required much more than merely slapping a supercharger on an Apache. True, the engines share fasteners and other mundane components, and the powder-forged connecting-rod bolts carry over. But based on dollar value, 91% of the Hellcat V-8 is all-new to handle the loads, he says.

The cylinder head employs variable valve timing and incorporates the same valve angles and valve sizes as the Apache. But cam profiles are optimized for the boosted Hellcat, and the new head requires 356-grade aluminum alloy with a special heat treatment while most Hemis use standard 319-grade aluminum.

“The thermal conductivity of 356 is significantly better,” Cowland says. “It enables us to take heat from the combustion chamber. It stops engine knocking, and we get the performance we need.”

Intake valves are hollow so they are lighter, and exhaust valve stems are sodium-filled, allowing heat to be drawn away from the valve head.

Cylinder deactivation, marketed by Chrysler as the Multi-Displacement System on other Hemi engines, doesn’t appear on the Hellcat due to the complex control strategies associated with the supercharger.

Cowland says the team could have found a way to add MDS to the Hellcat but didn’t have the time. The program began in 2011 and stalled for four months due to a financial hiccup for the automaker.

Like other pushrod Hemis, the Hellcat relies on tried-and-true port fuel injection. The injectors spray 38.4 cu.-ins. (630 cc) of gasoline per minute. “If you put all eight injectors into a pint (0.5 L) glass, they would fill it in 7 seconds at rated power,” he says.

In addition, high-pressure direct injection requires a pump, which leads to parasitic losses. The Hellcat would require two DI pumps, which would increase cost and create packaging problems, he says.

The twin-screw supercharger, supplied by IHI from its plant in Shelbyville, IL, truly sets the Hellcat apart from the naturally aspirated Apache. The only other Chrysler vehicle to use an IHI supercharger was the Chrysler SRT6 Crossfire coupe.

“It can withstand the resistance of 80 hp from the supercharger without slipping,” Cowland says, adding that the washers cost about $2 or $3 each. “We can’t afford for this to slip.”

When cruising at moderate speeds, a bypass valve routes air around the supercharger to improve fuel economy. When the driver lifts off the accelerator, a one-way clutch prevents inertia from the supercharger from driving the engine. Torque can be transmitted in only one direction.

The blower has a separate cooling circuit with two air/coolant heat exchangers that keep air temperatures below 140º F (60º C).

Cowland offers a word of caution to enthusiasts hoping to build their own Hellcat engines without using the cooling system. “If you want to generate 707 hp and you don’t take the coolant system with it, it won’t work,” he says.

A 707-hp engine in a car with a starting price below $60,000 is impressive, and it’s done a great job boosting the visibility of the Dodge brand. But it won’t do much to help Chrysler comply with pending CAFE requirements. Plus, gas-guzzler taxes on the car can reach $2,100.