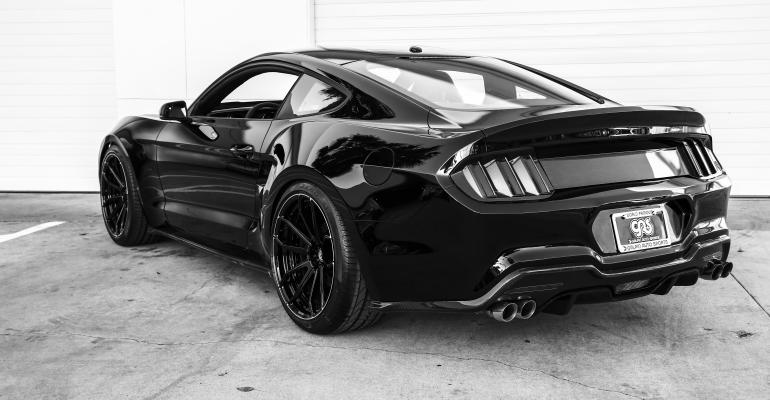 Green Not Fading as Fisker Fulfills Need for Speed

It&rsquo;s anybody&rsquo;s guess whether Henrik Fisker &ndash; acclaimed for his designs of the Aston Martin DB9 and V-8 Vantage, BMW Z8 and his own Fisker Karma hybrid-electric vehicle &ndash; will put his new effort into a traditional combustion-based product or again pick up the green baton.

LOS ANGELES –  Henrik Fisker announced his re-entry into the auto marketplace earlier this year with the roar of a custom 725-hp Ford Mustang he calls the Rocket and a V-12 Aston Martin Vanquish dubbed the Thunderbolt.

But the Danish-born designer sounds more tempered and practical when looking toward his future, which seems to be taking shape in India.

During an interview with WardsAuto in Los Angeles, home of his HF Design studio, which he opened after leaving hybrid-electric automaker Fisker Automotive in 2013, Fisker hints he’s “been working on quite an exciting, large...long-term...automotive project,” but declines to offer specifics.

Meanwhile, a recent report out of Mumbai by the Economic Times says Fisker has been shopping around India for potential business partners and is on the verge of launching a joint venture with a locally based company.

The story goes on to assert Fisker is set to reveal details of the deal just about any day now.

Until then, it’s anybody’s guess whether Fisker – acclaimed for his designs of the Aston Martin DB9, Aston Martin V-8 Vantage, BMW Z8 and his own Fisker Karma PHEV – will throw his new effort behind a more traditional combustion-based product or again pick up the green baton.

Whichever path he chooses, he notes, none should be surprised by his choices – as at least a few media outlets seemed to be after he unwrapped the Rocket concept at the Los Angeles Auto Show in November.

Inspired by specialty Mustangs created in the 1960s and ’70s, in particular the ’68 Shelby GT500, the Rocket is based on the ’15 Ford Mustang. Designed by Fisker and Galpin Auto Sports, the limited-production model gets its boost from its 5.0L V-8 engine, along with an array of bodywork upgrades.

The production Rocket, introduced March 14 at the 2015 Amelia Island Concours d’Elegance in Florida, will be equipped with carbon-fiber coachwork and Bassani exhaust, and will be priced at $109,100, or $125,000 for models with the supercharged performance package.

Also unveiled at the Concours d’Elegance was the Thunderbolt, Fisker’s take on Aston Martin’s Vanquish. The V-12 coupe, which the Galpin-Fisker team has said is not for sale and will not be leading to a later version for wide production, exhibits a powerful exterior profile molded from hand-laid, coach-built carbon fiber that meld unique characteristics found in Fisker’s past work.

The Thunderbolt’s chassis is seamless with a deep sculpted side air duct, along with triangular air intakes on the hood. The model has panoramic dark tinted glass, a wraparound rear window, thin but defined, blade-like taillamps and a distinctive and larger aluminum grille.

“I’ve never really been the believer that it’s all or nothing, even when I made plug-in hybrid vehicles. I never said that we all only will be driving that,” Fisker says. “I’m not of the opinion that everybody has to drive a hybrid and electric car within a certain amount of years in the near future.”

Sure, he says, green technology is an important and growing segment of the market, but, “I don't think anybody wants to eat salad every day. I like to have a cheeseburger and a big cheesesteak...But for that to happen, I need to throw in a salad once in a while and stay healthy.”

Fisker would like to see a future in which transportation systems are better integrated and technology advances make vehicles more affordable, truly giving consumers the ability to jump into different kinds of rides according to their needs.

“It’s not the guy sitting in the 725-hp V-8 that is creating the world's pollution,” but rather the daily drivers who may or may not be driving supercars or even fast cars just sitting in traffic, he says.

“We’ve got to get people who just sit in a traffic jam on the way to work maybe to drive a hybrid and electric car. But if you want to go out and have some fun on the weekend, I think it’s great to take your 700-, 725-hp Rocket and have some fun.”

Ideally, consumers could pick which vehicle to drive as they pick chairs, Fisker says. “There’s a difference between buying a chair where you’re going to sit and work on your computer at an office desk, versus sitting and watching television. You don’t necessarily buy the same chair for those two things.”

Fisker says his work with the Rocket, Thunderbolt and other high-performance design projects over the past two years rose from his enduring enjoyment of all things automotive.

Ultimately, it’s human emotion – the exhilarating, visceral experience one feels riding in a sports car or a supercharged model such as the Rocket – that, despite all the advances in alternate fuels, will keep gasoline-powered models on the road “for quite a while.”

As Fisker ramps up for the next project in his career, one of his goals is to never lose sight of the spirit of forward-looking creativity that sets one automobile apart from another, one automaker apart from its competitors.

“My experience has been that if you can find a way to bring the technology, the packaging and everything together, there’s still room to do something amazing, especially in the car industry.”