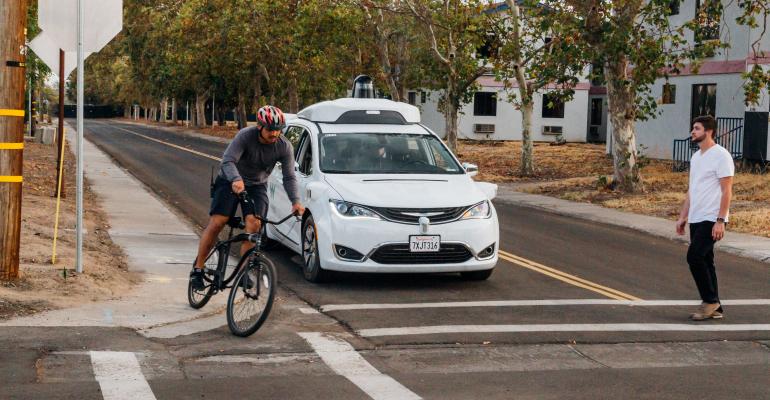 Being predictable and communicating well may not sound exciting, but it is great for building trust, whether you are talking about humans or machines.

Amazing because it whizzes around the test track here at an abandoned Air Force base without anyone in the front seats; boring because it does everything so effortlessly there’s nothing to get excited about.

Potential threats lurk everywhere on the test track: there are technicians posing as distracted bicyclists and pedestrians, simulated construction areas and impatient drivers entering roundabouts out of turn. It could be as scary as a Halloween funhouse, but instead the minivan calmly avoids every hazard without drama or screeching tires. A display screen in front of us shows the vehicle is seeing every potential interaction long in advance.

Most of the time it looks like a typical navigation display, but it periodically lights up like an x-ray to reveal everything the minivan actually is seeing: an intensely detailed three-dimensional real-time Lidar map of every object, person and tree branch up to three football fields away.

The extraordinary detail is fleeting “because we don’t want to overwhelm people with information,” an engineer sitting with us in the second row says.

You push a button to start the ride and you can push another if you want to stop and get out early. And there’s another button to call a Waymo advisor if there is a problem or a question. That’s about it for human controls.

Most automakers and suppliers are looking to ease into the age of self-driving vehicles with a step-by-step approach that gradually moves up the SAE scale from Level 2 (relatively minor driver assist), to Level 4. Level 3 autonomy anticipates human intervention in certain driving situations while Level 4 is considered highly automated, capable of responding in all driving situations with or without human interaction. Level 5 assumes the vehicle will handle all aspects of driving, including offroading and extreme weather.

Krafcik says the self-driving unit has been developing various types of autonomous vehicles for eight years and it developed a semi-autonomous guidance system that was “pretty good.”

But testing showed the better the system got, the more difficult handing control back to the driver becomes in an emergency. “The better you make it, the more people will check out (stop paying attention),” he says.

And then in a move that both defines Waymo’s philosophy and undermines potential competitors, Krafcik shows a video of a driver sound asleep at the wheel during a test drive. Shortly after managers saw that video, the company decided semi-autonomous systems were inherently unsafe and chose to focus only on Level 4 technology.

Since it decided to go for full autonomy, Google has become almost synonymous with self-driving cars, especially after the introduction of its distinctive self-driving “bubble car” shown off several years ago with no steering wheel.

But the golf-cart-like prototype, which was built in Detroit, could not be driven on public roads. Waymo now has a fleet of almost 600 Pacifica minivans equipped with its latest self-driving technology that it is testing on public roads in Phoenix, AZ, and suburban Detroit.

Krafcik is reluctant to reveal specifics about Waymo’s business plan, such as intended production volumes or when it will introduce saleable products, but he makes it clear the company doesn’t want to build its own vehicles. Instead it is partnering with a variety of vehicle manufacturers and mobility companies to provide guidance systems. Waymo already has relationships with Fiat Chrysler, Lyft and Avis Budget Group and also is interested in Class 8 and other types of commercial trucks.

Shortly after the announcement in January that Waymo would be buying hundreds of Pacifica minivans to turn into self-driving prototypes, FCA CEO Sergio Marchionne said he expected acceptance of Level 4 technology vehicles to grow rapidly and said it was likely FCA would buy the technology rather than develop it in-house.

“Our objective is to continue working with Google to see how far we can take this,” he said last January at the North American International Auto Show. However, in August FCA hedged its bets by joining BMW, Intel and Mobileye in a consortium to develop an autonomous vehicle for global markets.

On Waymo’s side, there has been speculation the ultimate goal of Alphabet, Google’s parent, is to turn cars into smartphones on wheels. But under Krafcik, a veteran auto executive who was CEO of Hyundai Motor America for 5 years and also did stints at Ford, TrueCar and New United Motor Mfg., Waymo is straddling the automotive and tech worlds. The company is offering up lots of juicy new self-driving software and hardware but also demonstrating it can thrive within the constraints of the automotive world, which includes 20-year product lifecycles, 10-year warranties, strict safety regulations, ferocious product-liability attorneys and customers who distrust technology.

“While this technology will be transformative, we see our role as enablers, not disrupters. That’s why we’ll continue to work with many different partners,” a company statement says.

Krafcik describes Waymo as a self-driving technology company with a mission to make it safe and easy to move people and things around. It’s a simple statement, but a tall order when you are creating vehicles that will pick up and drop off blind customers, children and 90-year-olds on busy city streets.

Dimitri Dolgov, vice president-engineering, points to Waymo’s various types of cameras, radars and lasers, all developed in-house specifically for Level 4 autonomous driving – as some of the key technologies that separate Waymo from the rest of the up-and-coming self-driving suppliers, most of whom are using a lot of off-the-shelf equipment.

Waymo says its hardware enables its cars to see significantly farther, sharper and more accurately than anything that exists on the market today. For instance, the company says its long-range Lidar can see up to 328 yards (300 m) down the road.

Thanks to Google’s eight years of development and enormous programming resources, Waymo says it also has software that is better at classifying objects, interpreting their movements, reasoning their intent and predicting what they will do in the future. These capabilities help vehicles confidently deal with complex situations and understand the social nuances of driving in traffic and nonverbal negotiation that happens during lane changes and merging. For instance, at a four-way stop or roundabout, the car will start edging forward like a human driver would to signal its intent to go.

Perhaps most importantly, Waymo says it has designed a self-driving user experience that immediately builds trust between riders and technology.

“Just like in a relationship, predictability and communication are key to trust,” says Juliet Rothenberg, product manager-UX and Early Rider Program.

To do this, the in-car user interface is designed to help passengers understand what the car is doing on the road and provide an easy way for users to interact with the vehicle.

For instance, when the car is preparing to make a right turn, the car’s camera “eye” will swivel to the left to signal that the car is focused on objects coming from the left, like a human driver would.

Krafcik says one of his proudest moments at Waymo so far was when he took his 91-year-old mother for a ride in a self-driving car and she felt comfortable immediately. He says she can’t wait until her Waymo can pick her up from her retirement village to take her shopping at Kohls.

We had a similar experience in our brief minivan test ride on Waymo’s test track. We were surprised at how quickly we felt at ease. Being predictable and communicating well may not sound exciting as car features, but it apparently is great for building trust, whether you are talking about humans or machines.