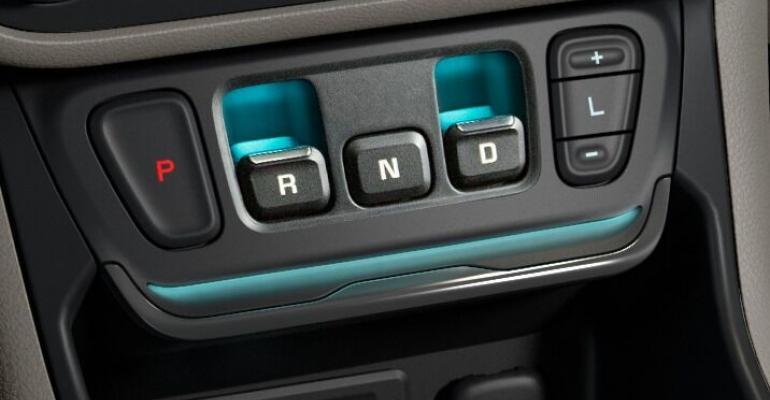 The 5-button, PRNDL key bridge is located at the base of the center stack and ahead of a deep center console the system permits because it does not use a traditional mechanical linkage to the transmission.

MILFORD, MI – General Motors joins the growing list of automakers gravitating away from space-robbing gearshift selectors to shift-by-wire systems that open up precious center-console space but in some cases have posed safety hazards.

When the ’18 GMC Terrain 5-passenger CUV arrives at U.S. dealers in the coming weeks it will usher to market Electronic Precision Shift, an electrically controlled gear selector consisting of push buttons and pull triggers.

The 5-button, PRNDL key bridge is located at the base of the center stack and ahead of a deep center console the system permits because it does not use a traditional mechanical linkage to the transmission, an all-new 9-speed automatic in the case of the Terrain for its two 4-cyl. turbocharged gasoline engines. An available 4-cyl. turbodiesel mates to a 6-speed automatic.

The Terrain’s migration to an electronic gear selector comes at a time when others in the industry are rapidly deploying systems using rotary dials and setups using push buttons exclusively, or a combination of both as consumers cry for storage space. Deep, lid-free pockets atop and pass-through nooks underneath the center console are now nearly the price of entry, especially in the booming CUV segment where buyers like innovative places to store their stuff.

But the by-wire systems, which automakers also lean on to differentiate their products, have come under sharp scrutiny by federal safety regulators.

FCA US, for example, was compelled to recall 1.1 million Chrysler, Jeep and Dodge vehicles for a design defect in one of its by-wire shifters. Some customers were confused which gear they were in and the system has been cited in 121 crashes and 41 injuries.

GM says its system is superior to others because it retains the 3-step shifting process drivers have become familiar with in automatic transmissions, which occurs when they place a foot on the brake, engage the shift lever and place the car in gear. Precision shift emulates that process, except in addition to placing a foot on the brake the driver grasps either the drive or reverse trigger and pulls it back to engage the gear. Park and neutral are push buttons to differentiate them from the other gears and leave no doubt in the driver’s mind that they are, for example, in park and not mistakenly in reverse or drive.

“We feel pretty comfortable from a safety strategy that we are in the right direction,” says Rick Spina, executive chief engineer-compact SUVs at GM.

“You quickly learn the (key) positioning and begin using just two fingers, a natural biomechanical movement,” Spina adds during a demonstration of the technology at GM’s Milford Proving Ground outside Detroit.

A brief test drive appears to support the theory. Resting a finger on the reverse and driver keys feels natural and shifts between the two are rapid during parking maneuvers. Park will not engage while in motion and the system always defaults to park, for example, in case a driver opens the door and tries to exit the car while it is in drive.

While in park, the parking brake automatically engages as a backstop against a system failure to prevent a rollaway. At night, blue ambient lighting illuminates the buttons and triggers.

Spina says GM’s by-wire system, which the automaker uses with a different interface on products from Cadillac and Buick, are more durable than mechanical linkages, too.

It also is a glimpse of the transmission technologies autonomous cars will use, Spina says, because, unlike humans self-driving cars cannot operate a mechanical shifter.

“It helps explain why the entire industry, not just GM, is doing this,” he tells WardsAuto. “It’s not just fashionable or for extra storage space.”

GM collaborated on precision shift with GHSP of Grand Haven, MI, which wrote the software to talk to the automaker’s electronic-control unit.

Along with the Chevrolet Equinox, which shares an all-new platform with the Terrain but does not use precision shift, the two CUVs are among GM’s most popular products. The Terrain has sold more than 696,791 copies in the U.S. since it was introduced in 2009, while the Equinox has delivered 2.24 million since it debuted in 2004, according to WardsAuto data.