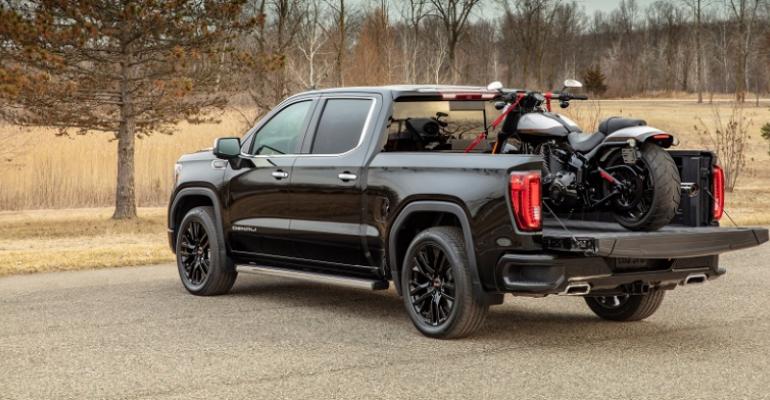 Exclusive to the Sierra Denali and AT4, the carbon-fiber box resists rust, dents and scratches and saves 450 lbs. (204 kg) compared to a traditional steel bed. GM expects it to enhance resale values, too, given its durability.

DETROIT – General Motors prices its ’20 GMC Sierra Denali CarbonPro package with its industry-first carbon-fiber cargo box at $70,020, while the off-road leaning AT4 model will cost $66,635 with the technology, and the trim line comes to market alongside a host of updates just one year into the launch of the light-duty pickups.

It is not the first GM pickup to cross the $70,000 mark, with heavy duty models of the GMC Sierra Denali already in that zone. Accessorized light-duty models also can cross that threshold, but it is a straight-from-the-factory first for the automaker and a reflection of exactly how popular luxury pickups have become in recent years. GM says 50% of GMC pickups already sell for more than $50,000 apiece.

And the carbon-fiber cargo box has been one of the most anticipated additions to the segment. Exclusive to the Sierra Denali and AT4, it resists rust, dents and scratches and saves 450 lbs. (204 kg) compared to a traditional steel bed. GM expects it to enhance resale values, too, given its durability.

“When you look through the option lists yourself and do the math, what you’ll find is that these customers are getting our best innovation, and the carbon fiber bed is included for no incremental cost,” says Duncan Aldred, vice president-Global Buick and GMC. “They’ll have the envy of the truck industry at a tremendous value.”

In addition to the CarbonPro package, which arrives at GMC dealers in August, the Sierra line will add for the new model year adaptive cruise control and a 3.0L inline turbo-diesel 6-cyl. making 277 hp and 460 lb.-ft. (624 Nm) of torque. The diesel pairs to a 10-speed automatic transmission, which also will be made available for the first time to Denali and AT4’s standard 5.3L V-8.

Additional updates to the ’20 Sierra include a segment-first, transparent trailering view through the pickup’s infotainment screen. The view is in addition to 15 other available camera views. An Elevation trim option will be offered in crew-cab configurations, while trailer tow mirrors will be available as a free-flow option and the 8-in. (20 cm) infotainment system will support the more richly contented SiriusXM with 360L2.

Aldred says updates to the Sierra, which launched as a next-generation model late last year and only last month outsold the previous-generation pickup, were planned and not in response to moves from rivals such as the Ford-150 and Ram from Fiat Chrysler.

“It was just a cadence of development – what you can do at launch and what you can do shortly after launch,” he says during a media briefing on the updates here, where journalists had the opportunity to whack the carbon-fiber box with an aluminum baseball bat.

In fact, work already is under way on additional enhancements, he says.

“It’s a competitive segment,” Aldred says. “You have to do that. Buckle up – things are going to continue at this pace.”