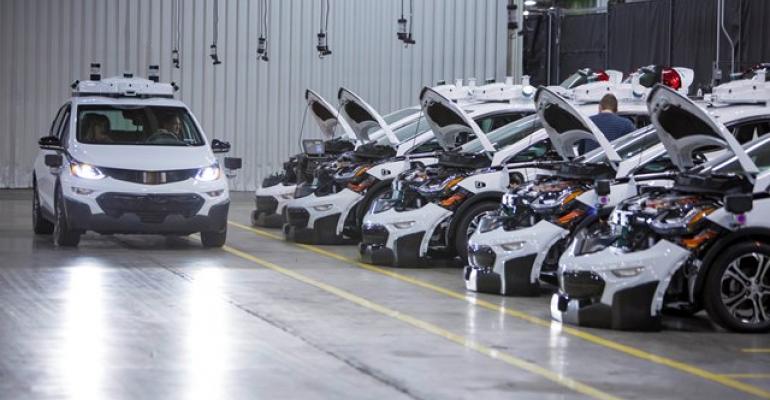 GM President Dan Ammann says if GM continues to at its current rate of AV development, it will meet the target and does not see regulatory walls potentially blocking its progress.

General Motors expects to deploy large-scale numbers of fully automated battery-electric vehicles in complex environments by 2019, but the automaker also warns safety ultimately will determine the timetable and the engineering challenge to meet that target is massive.

“The bar is very high from a safety point of view,” GM President Dan Ammann says. “This will be the deciding factor on when we are ready to take the driver out of the car and deploy this technology at large scale.

“To get to this point in time, we will need to deliver some very extreme performance improvements,” Ammann tells GM investors in San Francisco, where the automaker demonstrated its latest AV technology. “The good news is we’ve been delivering exponential performance improvement, quarter in and quarter out for (some time).”

Ammann says if GM continues at its current rate of AV development, it will meet its 2019 target and does not see regulatory walls potentially blocking its progress. He notes that at the federal level in the U.S. regulators are encouraging the deployment of AVs for the potential to reduce crashes and tailpipe emissions, while at the state level eight governments already allow driverless cars and more plan to follow suit.

“We don’t see (regulations) as an impediment,” Ammann says.

With 180 AVs under testing in real-world environments by its Cruise Automation subsidiary in San Francisco, Detroit and Scottsdale, AZ, as well as Cadillac cars on sale with a degree of automation, GM is considered among the leaders in driverless-car technology.

Ammann says the automaker is moving aggressively in the segment because it presents the biggest business opportunity since the Internet. However, seizing that opportunity, he adds, requires GM to move quickly so its strategy is to develop all the technology in-house, either organically or through targeted acquisitions such as its recent purchase of Pasadena, CA-based Lidar expert Strobe.

Lidar is a remote sensing technology critical to the operation of an automated vehicle.

“The nature of the development of this product is highly iterative,” he says. “We will only move at the speed we want to move if we iterate the (entire) system together.”

Nonetheless, Ammann admits, the road ahead is steep.

“The engineering challenge to get to our minimally viable product, to get to a commercial launch, is 10,000 times more difficult than doing a simple AV (demonstration) of a car driving around the block because of all the safety requirements that need to be met.

“The way that we are set up, by having all the capability under one roof, gives us this unique capability to do this faster, perhaps, than others are able to.”

Ammann reiterates the major role fully electric EVs will play in GM’s vision for zero crashes, zero emissions and zero traffic congestion, but also underscores the impact it could have on the mobility experience.

Looking specifically at the first-generation ride-sharing sector, he notes that an average ride in San Francisco costs about $2.50 per mile, with $1.75 going to the driver and $0.75 to the company. Driver- and passenger-incentive costs are about $1.00 of the ride for a loss-making venture.

But early-stage AVs would cost ride-sharing passengers about $1.50 per mile, a 40% cost reduction, and without a driver all of the revenue would go back to the company.

“You can end up in the very early days of AV with unit economics that are vastly better than the current ride-share business, but at the same time offer the customer a significant discount,” he says.

But to get to that point, or even a market where rides cost $1.00 per mile as GM expects in 2025, Ammann says AV costs must come down, vehicle life must go up and utilization rates have to increase. He sees progress on each front, citing expectations to slash the cost of expensive Lidar systems 99% with GM’s acquisition of Strobe and a forecast for battery costs to soon tumble below $100 per kWh from $145 per kWh today; shifting to an aircraft-oriented method of maintenance and upfitting to prolong vehicle life up to four times; and lifting utilization rates three times as the industry learns more about when and where to most effectively deploy the cars.

“These three things multiply out,” Ammann says. “You can make a really big change in the cost per mile.”

AVs also will improve the ride-sharing user experience, he adds, which would lead to greater adoption of the service.