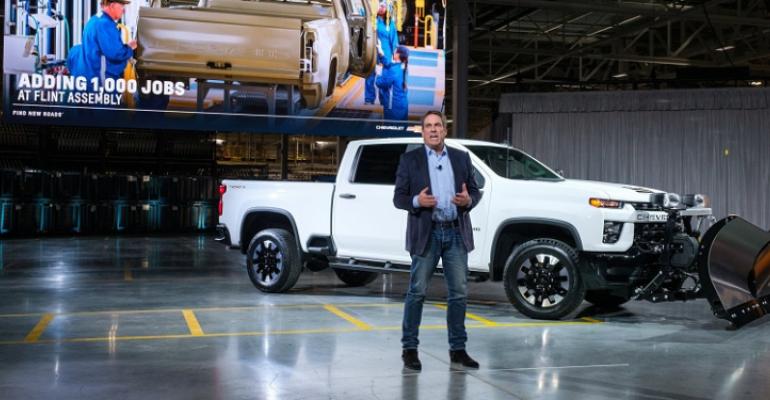 General Motors President Mark Reuss reiterates plans to bring an electric pickup to market, a move widely considered unthinkable until just recently and one made possible by sooner-than-expected cost parity between battery-powered vehicles and those with traditional internal-combustion engines.

“We will have a complete electric lineup, including a pickup truck that’s in development,” Reuss tells Wall Street analysts at the UBS Global Industrials and Transportation Conference.

Reuss’ remarks represent the second admission GM wants to bring an electric pickup to market. GM Chairman and CEO Mary Barra broke the news in April during an earnings call with investors in which she sought to clarify chatter regarding a potential acquisition of electric-truck startup Rivian.

Plymouth Twp., MI-based Rivian burst into the EV segment last year with the unveiling of a battery-electric pickup and SUV. According to Rivian, the truck will launch in 2020 with a range of 410 miles (660 km). Pricing ranges between $69,000 and $72,500. GM reportedly entered talks with the company but broke them off and crosstown rival Ford stepped in with a $500 million investment in Rivian.

Reuss says GM’s third-generation global EV platform will help make the battery-backed pickup a reality. The platform is flexible enough to accommodate nearly 10 different body styles, which will drive scale and reduce cost, with each model receiving battery technology to fit the pricing and range its segment and brand demands.

“This architecture is the canvas on which we will paint a profitable EV program,” Reuss says. “We can build everything on this (platform) from just three drive units: front-wheel drive, rear-wheel drive or e-all-wheel drive.”

While range and charging infrastructure issues have kept a lid on EV sales to less than 1% of U.S. deliveries in recent years, Reuss says GM has the technical expertise and industrial connections to solve both, including a newly announced partnership with Reston, VA-based engineering company Bechtel to install charging stations across the U.S.

The biggest hurdle, he admits, is cost of batteries and other important EV-exclusive components. But those costs are falling to the point where, combined with increased regulatory pressure on ICEs, the two propulsion technologies soon will be on par.

“We’re going to reach parity a lot sooner than people think,” he says. “(ICE) compliance will become expensive. All these things and more will lead to greater consumer acceptance of EVs, plus they are going to be great cars.”

To reach parity, battery pack costs must fall to $100 per kWh from upwards of $230 per kWh today. Most experts project it to occur in the 2025 timeframe. Reuss does not offer a target date, saying parity will occur in the not-so-distant future.

“That’s why we’re maximizing our effort and resources to make the future electric,” he says.