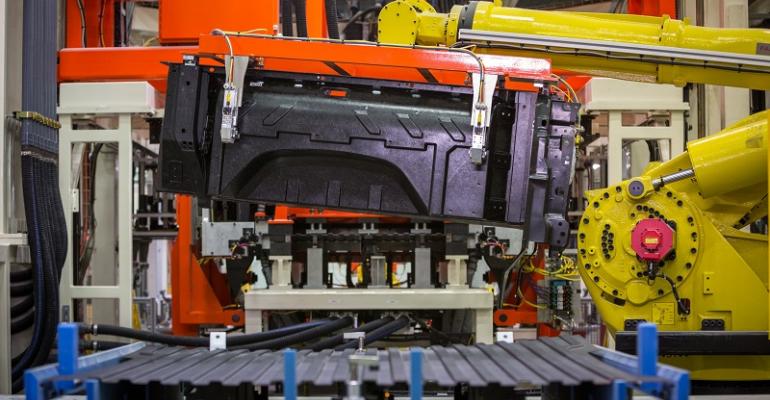 Mark Voss, engineering group manager for Sierra, says of the cargo bed’s durability: “When the end of the world comes, all that’s left will be cockroaches and CarbonPro beds.”

FORT WAYNE, IN – General Motors will make history in the coming weeks with the start of regular production of a carbon-fiber cargo bed in its ’19 GMC Sierra Denali and Sierra AT4 large pickups, an intensely durable and lightweight technology it hopes to apply to other future products.

As U.S. fuel economy rules tighten, GM, Ford and Fiat Chrysler must find ways to make the trucks they bank on so heavily more efficient. Ford introduced an aluminum body to its bread-and-butter F-150 several years ago to shave weight, while FCA this year added battery-backed 48V mild-hybrid technology to its Ram line of pickups.

The CarbonPro cargo bed for the Sierra saves 62 lbs. (28 kg) over traditional steel and nearly 100 lbs. (45 kg) with the ability to eliminate bedliners, yet it has six times the impact resistance of steel and resists dents, scratches and corrosion.

Mark Voss, engineering group manager for the Sierra says of the cargo bed’s durability: “When the end of the world comes, all that’s left will be cockroaches and CarbonPro beds.”

However, before the apocalypse arrives GM hopes the CarbonPro project will give it the foundational expertise in the application of lightweight carbon-fiber and ever-increasing volume to drive down cost of the expensive material to broaden its use across the Detroit automaker’s product portfolio.

GM recently has made a mixed-materials strategy central to its product-development process, where it employs a combination of as many as 13 different materials to improve fuel economy, driving dynamics and cabin quietness.

Carbon fiber is among the most costly and difficult to integrate with other materials, but GM says it has found unique bonding and adhesion methods to make it work. The process was first applied to the Cadillac CT6 large luxury sedan and Herrick says GM continues to refine the science, including the best ways to join pieces of the CarbonPro box with rivets and adhesive. 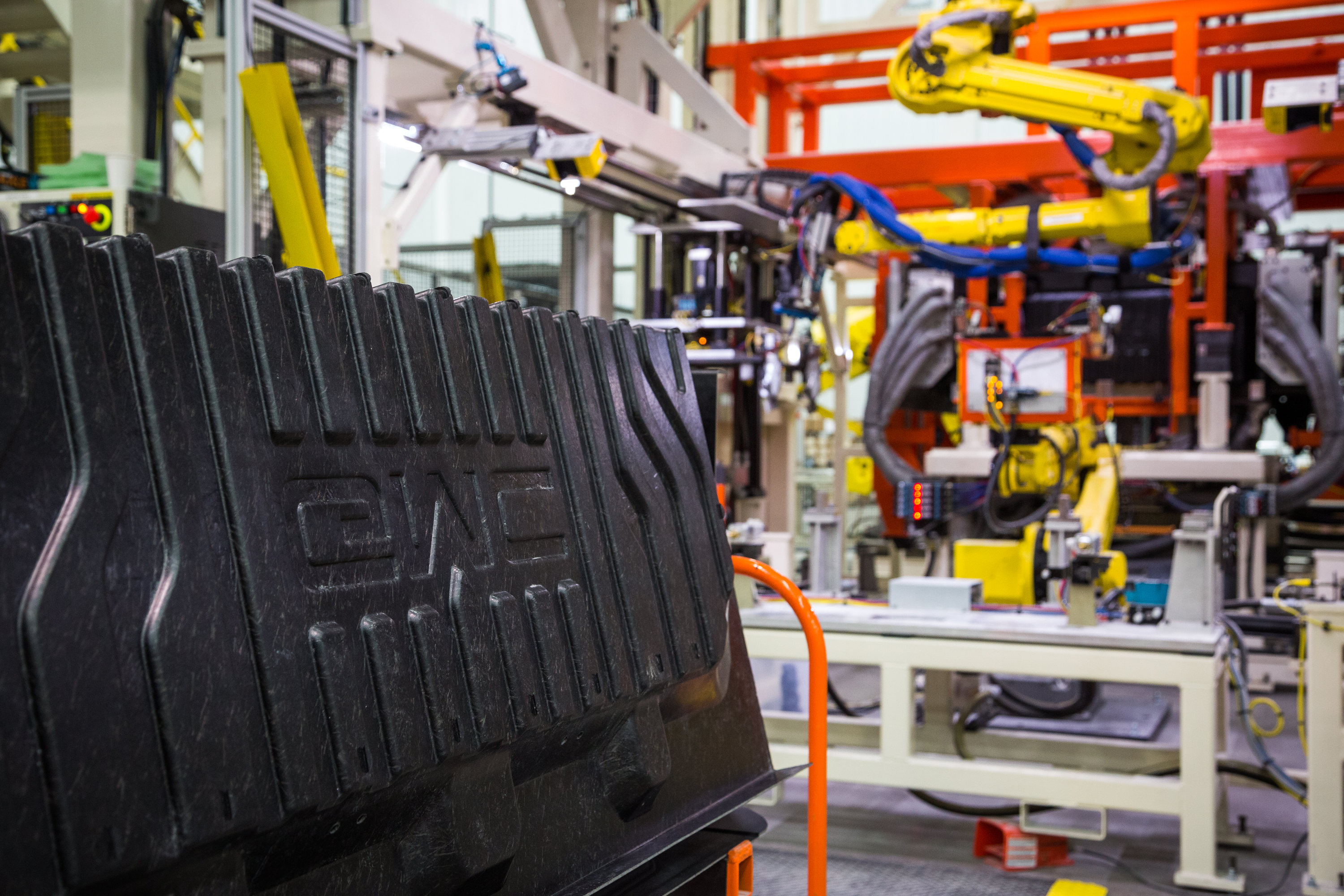 “The current bonding process is not the one we started with, and it may change over time as scale goes up and costs come down,” Herrick tells Wards on a tour of Continental Structural Plastics, a supplier of the CarbonPro cargo bed just a few miles from where the Sierra is assembled.

For now, it certainly seems to work. Following a demonstration of the production process, engineers attempt to tear apart one of the beds with a hammer, pry bar, and muscle without much luck. It is a teardown GM does after every few production batches in a corner of the 65,000 sq.-ft. (6,039 sq.-m) production area CSP dedicated to CarbonPro assembly.

CSP is a longtime assembler of lightweight composite automotive structures, including carbon-fiber pieces for GM’s Chevrolet Corvette and Camaro sports cars. It is a unit of the Japanese chemicals and materials supplier Teijin.

An $8 billion industrial enterprise, Teijin and GM have been developing the carbon-fiber cargo bed for nearly a decade, and shortly before the technology was ready for production Teijin purchased Auburn Hills, MI-based CSP for $825 million in 2017.

Herrick says GM did not play matchmaker for the two, although the CSP location relative to the assembly plant for the newly redesigned Sierra and Chevy Silverado was influential, on top of CSP’s manufacturing expertise. The acquisition by Teijin cemented its relations with GM, which reportedly were strained at times during development of the cargo bed over intellectual property disagreements. Herrick brushes off the reports.

“It was nothing outside the normal course of business between two partners,” he says.

Whatever the case, the two ended up sinking millions into the venture, although GM does not disclose its outlay, and the result is a gleaming addition to the nearly 20-year-old and 350,000-sq.-ft (32,516 sq.-m) CSP factory. It will fully employ 550 people when CarbonPro production hits its stride in the coming months. 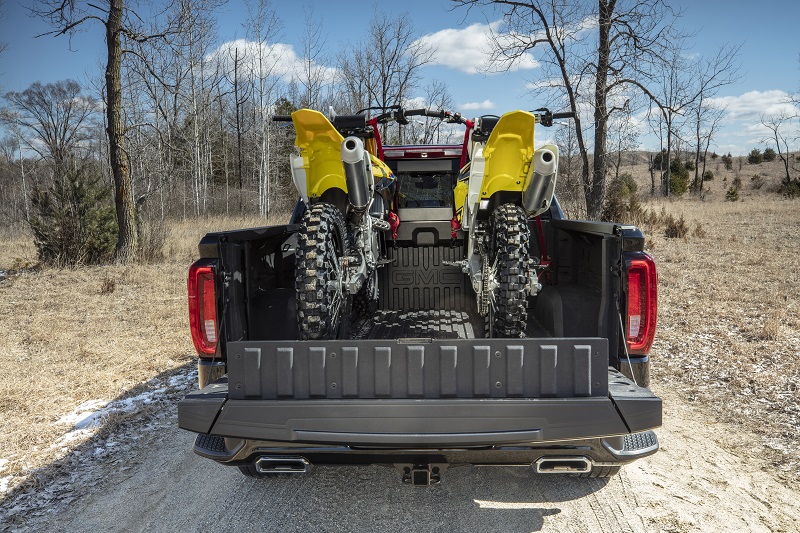 The facility’s addition and the presses were constructed simultaneously, says CSP plant manager Karen Williams, due to their sheer size. But unlike their peers stamping steel parts, the presses operate with the subtle hiss of rapidly heating material rather than the thunderous clap of metal dies.

There also are a pair of bond cells where the pieces are mated with adhesives. Several Fanuc robots perform an industrial ballet, moving cargo-bed pieces into the cells and presses.

The carbon fiber arrives in large sheets and is trimmed by robots before getting stamped into the main floor panel piece. Much of the trimmed pieces are ground, mixed with additional carbon-fiber material and used for other pieces of the bed. The goal is reuse 100% of the carbon fiber.

“It helps with the green-ness and sustainability of the box, but also with cost,” Voss says.

CSP officials say it currently produces one cargo box every 10 minutes with a single shift. GM declines to share capacity or output goals for the enterprise once it reaches full production.

Up the road at the assembly plant for the Sierra and Silverado, production of the new trucks is performed around the clock. GM invested $1.2 billion into the 4.6 million sq.-ft. (427,354 sq.-m) facility two years ago to build the new trucks in both crew-cab and double-cab body styles. Models with the CarbonPro box will be added to the line shortly.

Herrick says GM chose to execute a carbon-fiber cargo bed because it seemed a logical application and, unlike some industry applications of the technology for functional purposes, it is customer-facing. The $65,000-plus Sierra Denali and AT4 also would absorb the cost of the material more easily, too. It will be part of a “carbon” package including unique wheels, technology content and specific badging. Pricing has not been released.

For Herrick and his team, production launch of CarbonPro is a deeply personal event.

Tim Connors, GM’s former global manufacturing chief for fullsize trucks and an internal champion for CarbonPro, passed away ahead of its market release. He was struck and killed by a motorist while riding his motorcycle north of Detroit. As tribute, the underside of every CarbonPro is stamped with a “Connors Way” Easter egg.