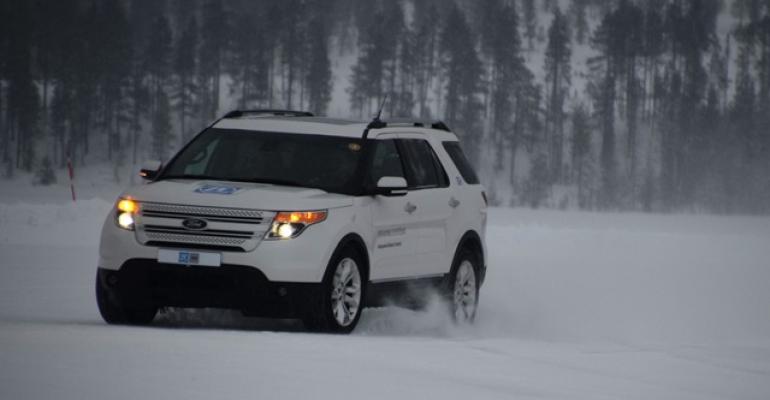 ZF TRW&rsquo;s Integrated Brake Control is a 1-piece module that eliminates the master cylinder, vacuum pump and associated hoses while incorporating electronic stability control, traction control and an electric motor to push hydraulic fluid to brakes at all four corners.

ARVIDSJAUR, Sweden – Suppliers in the braking business for years have been developing concepts to replace conventional vacuum-based boosters as a way to improve fuel economy and reduce weight.

The market for electrically actuated vacuum-free brake systems is just getting off the ground, and ZF TRW says the technology is about to begin a rapid ascent, seeing application in 8% of vehicles worldwide by 2020. By 2025, the penetration rate is expected to reach 20%.

ZF TRW’s latest approach is its Integrated Brake Control, a sophisticated 1-piece module about the size of a volleyball that eliminates the master cylinder, vacuum pump and associated hoses, while incorporating electronic stability control, traction control and an electric motor to pump hydraulic fluid to all four corners whenever stopping force is needed.

The module is 13 lbs. (6 kg) lighter than the total weight of a conventional system, requires about half the packaging space underhood and enables 10% more braking regeneration. This 10% gain will be significant as more hybrids and electric-vehicles take to the roads and as fuel-economy regulations ratchet up.

ZF TRW says it will supply IBC for a North American vehicle manufacturer beginning in 2018, followed by another customer a year later for a global vehicle platform.

Industry sources say the first application is General Motors’ next-generation fullsize pickup trucks and SUVs. In 2015, GM sold more than 1 million vehicles in the U.S. from the current GMT K2XX architecture, including the Chevrolet Silverado and Tahoe, GMC Sierra and Yukon and Cadillac Escalade.

Initially, the IBC technology will be nearly twice the price of conventional braking components, but ZF TRW engineers say the system could achieve cost parity with a traditional setup within 10 years.

“If we are not cutting in half the price in 10 years, then the market will not be there,” Manfred Meyer, vice president-braking engineering, tells journalists during a ZF TRW demonstration of braking and steering technologies here.

“You have significant advantages with this system,” he says. “Because of this, automakers are paying more for these advantages and because they want brake systems that are vacuum-less.”

Although the GM truck and SUV braking program represents a massive contract, ZF TRW will not be the first in the market with such a system.

German rival Continental will introduce its MK C1 brake-by-wire system in a European vehicle that comes to market this spring and will be sold in the U.S.

These next-generation brake-by-wire systems tie in neatly with adaptive cruise control, emergency braking, lane-keeping and other technologies that inch the industry toward automated driving.

ZF TRW’s IBC lacks the conventional mechanical linkages with the brake pedal, so it functions independent of the driver’s foot. A pedal sensor detects how much braking force the driver wants, and the system can respond with all available electrical energy if necessary for stopping.

That means stopping distances can be reduced as much as 30 ft. (9 m) when decelerating from 62 mph (100 km/h), the supplier says. “With IBC, we can (stop) faster than a good driver can,” Meyer says.

“We don’t need to suck fluid from a reservoir through valves and then through a hydraulic channel. We have fluid directly in front of the hydraulic piston, and then an electric motor with a gear pressurizes the fluid. For that, we have significantly lower (energy) losses,” he says. “That’s why, physically, we can be faster than a driver.”

The technology will result in safer self-driving cars, Meyer says. “If we have more and more automated driving functionality, this kind of ability to decelerate the car as quickly or even quicker than a normal driver is an important element.”

For this reason, he sees IBC and other brake-by-wire systems becoming the industry standard in the future.

Because of this significant benefit, Meyer says several customers “are knocking on the door saying, ‘Hey, we want that as well.’”

Here on a frozen lake in northern Sweden, ZF TRW offers test drives in a Ford Explorer equipped with IBC. However, the supplier says Ford is not a customer yet.

Behind the wheel of the Explorer, the brake pedal feels linear and completely normal, and there is no telltale sign that next-generation technology is at play.

An engineer riding shotgun controls a tablet and demonstrates how easy it is to adjust brake-pedal feel. One second, brake force comes on rapidly, as if in a Chevrolet Corvette. Seconds later, after a few keystrokes from the engineer, the pedal travel is extended to the point it feels like a mushy 1970s Buick.

On the automated side, the engineer uses the tablet to trigger a full emergency stop, demonstrating how the system would behave if a bicycle rider should pass in front of the car.

In this demo, on dry pavement, the brake force is extreme, and the seatbelts are pulled taut to hold occupants securely in their seats.

Although impressive, the IBC system on the Explorer test vehicle was not fully functional, so it was not able to demonstrate skid-preventing electronic stability control, Meyer says.

The initial applications of IBC are for vehicles with disc brakes, but he says the system would work with older drum brakes as well. “There are no limitations for what types of vehicles it can work on,” he says. “You could put it on a smaller car, but it’s probably over-engineered for a smaller car.”

Meyer says it is important the first IBC launch goes smoothly, and that the ramp-up with additional customers be gradual.

“We do not want to rush with such a new technology to too many customers,” he says. “New technology means you need significant investment. You have to be cautious about your supply base. This is a system that has many functions that are fairly new.”

On the steering side of the business, the supplier offers test drives in a Volkswagen Golf equipped with rear-wheel steering, known as Active Kinematics Control, which was part of the ZF portfolio before last year’s acquisition of TRW.

The technology was added to demonstrate how a small vehicle such as the Golf could benefit from better steering feel, a tighter turning radius and improved stability.