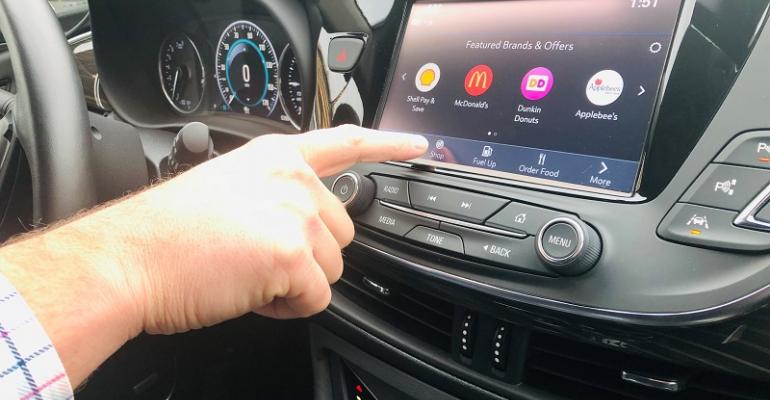 Using their touchscreen, Marketplace users can place orders from behind the wheel for food and drink items from merchants such as Dunkin’ Donuts, Starbucks, Applebee’s and Wing Stop.

Thinking it may have first-mover advantage in the emerging on-demand economy and a chance to tap the notorious brand loyalty of Americans, General Motors doubles down on its Marketplace app with additional services and a new version of the 1-year-old marketing platform coming soon.

Marketplace appears on about 3 million properly equipped Chevrolet, Buick, Cadillac and GMC cars and trucks from the ’17 model year forward. Using their touchscreen, drivers can place orders from behind the wheel for food and drink items from merchants such as Dunkin’ Donuts, Starbucks, Applebee’s and Wing Stop. It also is possible to pull up to the pump of a Shell or Exxon fuel station and carry out the transaction safely and easily from the driver’s seat.

Yelp Reservations joined the platform earlier this month. With a couple taps of the infotainment screen, drivers can search for a restaurant by cuisine type within a 25-mile (40-km) radius and make a reservation for up to 10 people. Drivers can call the restaurant using the app, too.

The technology comes at no cost to the vehicle’s owner. No data plan is necessary, either. Although it varies by individual merchants, GM earns money off the platform through revenue sharing, platform-placement fees and the exchange of marketing support. Owners also can purchase GM services such as OnStar 4G Wi-Fi and satellite radio.

Marketplace launched with eight merchants and service providers, such as discounter Priceline. The roster has grown to 14 and Goddard says more are in the pipeline. He does not hesitate to say GM aggressively is pursuing merchants, including big-box retailers such as Costco. But not every retailer fits the model, he adds, while others may not seem the perfect match at first blush. Office Depot is one example.

“It turns out you have all these small-business owners driving around all day dropping into Office Depot to pick up supplies,” Goddard tells Wards during an interview and demonstration of Marketplace’s new functionalities.

Goddard says GM is on track to soon launch Marketplace 2.0, although he stops short of offering a specific timeline or details of the upgrade. But he says GM tinkers with app frequently, using over-the-air updates when adding a new feature or merchant. The automaker has 400 GM owners providing regular input on their experience with the app.

Goddard puts the number of Marketplace users in the “hundreds of thousands,” but seems more satisfied with its 10% click-through rate, or the number of users who click into the app’s merchants. The average CTR for a search advertisement is less than 2%, Goddard says Marketplace’s fuel stations witness CTRs of 20%.

GM is not alone in the industry with a marketing/commerce platform in its vehicles. Hyundai, for example, added a similar feature earlier this year to its Blue Link connected-car system. But the Detroit automaker is among early movers in the on-demand economy, where 22 million Americans are making $58 billion worth of purchases annually to skip the line.

Marketplace also is an app embedded in the vehicle. In-car connectivity has been dominated by the mobile device, with automakers designing infotainment systems to pull content from the smartphone. Experts think the future is embedded connectivity.

“The solution in the car will be superior,” says HP Jin, co-founder, president and CEO of Telenav, a pioneer in automotive navigation systems. Jin’s remarks came at the recent Wards Intelligence Smart Mobility Summit in San Francisco.

Embedded also is safer. Nonetheless, GM took some heat from consumer-safety groups shortly after launching Marketplace because of the notion of shopping behind the wheel. But Goddard says Marketplace conservatively follows industry guidelines for preventing distracting driving.

“Our primary focus is to bring these services to our customers as safely as possible,” he says, adding that Marketplace helps keep a driver’s phone in their pocket. “People who object to it usually don’t understand it.”

Goddard says GM removed the cognitive element from the user process and limits the purchase process, including hotel reservations, to a couple of steps. For example, drivers do not scroll through a menu to order a drink from Dunkin Donuts or take-out from Applebee’s. It uses most-recent purchases or stored favorites to reduce complexity. Some functionality is disabled unless the vehicle is in Park and GM also will limit the number of swipes a driver can perform.

GM does not intend to cap the number of merchants on Marketplace. Goddard says owners will do that themselves, because Americans are fiercely loyal to their brands. In other words, a Starbucks customer is unlikely to visit Dunkin’ Donuts, and vice versa, so the car owner is likely to configure the system with one or the other. The same likely would apply to gas stations.

Asked if GM might put electric-vehicle charging points onto Marketplace, Goddard says not at this point.

“But Shell is going to get into the charging business, so then we probably would,” he says.

Marketplace technical partners for the automaker include Sonic Mobile, Xevo and Conversa. Each of the companies helps GM with real-time interaction data, such as vehicle location, time of day and a personalized experience with the merchants.

IBM, an early GM partner on the app and elsewhere in the automaker’s business, is expected to deploy its Watson artificial intelligence technology to Marketplace in the future. Watson likely will use AI to get the right information to Marketplace users at the right time.

But that is not an indication GM intends to push advertising on the platform, a notion to which Goddard emphatically shakes his head no. However, he does confirm GM wants to soon integrate voice commands to the app.