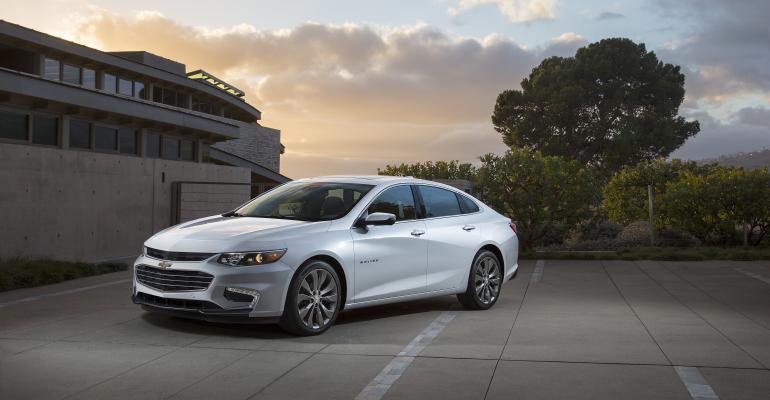 The latest iteration, which marks the Malibu&rsquo;s third redesign in just over three years, will deliver on key customer demands such as fuel economy, value, technology, safety and distinctive design, GM executives predict.

WARREN, MI – General Motors takes another stab at raising its entry in the dog-eat-dog-midsize car segment, pulling the wraps off the ’16 Chevrolet Malibu later today at the New York Auto Show and hoping to impress on U.S. consumers the brand’s ongoing product evolution.

“It’s been difficult to win in this segment with 17 incredible competitors,” says Steve Majoros, director-marketing, passenger cars and crossovers at Chevrolet. “But we think we are ready to win because we think we have a car that meets exactly what customers are looking for.”

But Majoros predicts the latest iteration, which marks the Malibu’s third redesign in three years, will deliver on key customer demands such as fuel economy, value, technology, safety and distinctive design. He expects the nameplate’s industry-leading quality, as measured by J.D. Power & Associates, will continue, too.

“I firmly believe this is going to be the industry’s best midsize car,” Majoros says during a sneak peek of the new car here.

A first-ever strong hybrid for the Malibu will push available fuel economy past 45 mpg (5.2 L/100 km) combined, well ahead of the 29 mpg (8.1 L/100 km) of the current micro-hybrid and in likelihood, at for least the near term, past current rival entries the Ford Fusion, Toyota Camry and Hyundai Sonata hybrids. The strong hybrid employs a number of technologies also found on the redesigned ’16 Chevy Volt extended-range electric vehicle.

The latest Malibu, arriving at dealers in the fourth quarter, also brings to market a newly developed 160-hp Ecotec 1.5L 4-cyl. turbo as its standard engine. One member of a family of next-generation small-displacement 3-cyl. and 4-cyl. mills coming from GM this year, the 1.5L turbo promises a peak 37 mpg (6.4 L/100 km) highway.

The 1.5L turbo will mate to a 6-speed automatic transmission, while the 2.0L turbo receives GM’s first application of an 8-speed automatic in a front-wheel-drive vehicle.

However, the Malibu’s suite of advanced technologies is not limited to the powertrain. It also ushers to market GM’s first teen-driver safety technology, which promotes safe driving habits through programmable items such as muting the audio when passengers are unbuckled and limiting speeds to a predetermined level.

GM says its teen-driver technology is the first in the industry to offer parents a visual display of their kids driving habits. The system is standard on most models.

John Cafaro, executive director-design of global Chevrolet cars, admits previous Malibu styling has lagged behind other midsize cars, but he feels a switch in vehicle platforms for the new one provides the right elixir.

“Finally, we have a car that is architected to win in this segment,” he says. “If you don’t have the bones, the structure, the wheels in the right place it is very difficult to win.”

The exterior redesign includes a more expressive front end, detailed jewel-like accents and light signatures. It is 300 lbs. (136 kg) lighter, slightly lower and 2.3 ins. (58 mm) longer than its predecessor, and the Malibu boasts a stronger structure for improved driving dynamics.

Inside, the car gains additional rear-seat room and a restyled center stack with greater differentiation between the climate and infotainment controls. A standard 7-in. (18 cm) or optional 8-in. (20 cm) color touchscreen with higher-speed data processing anchors an infotainment system featuring OnStar with an available 4G wireless Internet connection and, on select models, wireless smartphone charging.

Center-console storage space expands over the old model and perforated leather seats and ventilated seats are available for the first time.

Majoros admits the sales leaders in the segment, the Camry and Honda Accord, have a highly loyal loyal following. But he thinks a new push by GM to reshape the entire Chevrolet brand in the eyes of consumers will win over Americans to the Malibu.

“We’re storming the beaches right now on Chevrolet,” he says of the brand’s overhaul, which GM hopes will demonstrate its new focus with innovative products such as the Volt and Colorado midsize pickup, a retooled retail experience and fresh marketing approach.

“People in this segment buy the parent brand and we haven’t had a good entry in the mid-car segment. So it is No.1, change the perception of the Chevrolet brand and, once we get there, address the needs of mid-car buyers.

“We are going humble, hungry and strong with the marketing efforts behind the car.”

The Malibu is one of five redesigned vehicles from Chevrolet this year, a rollout that will update every entry in the brand’s car portfolio to no more than 2 years old.