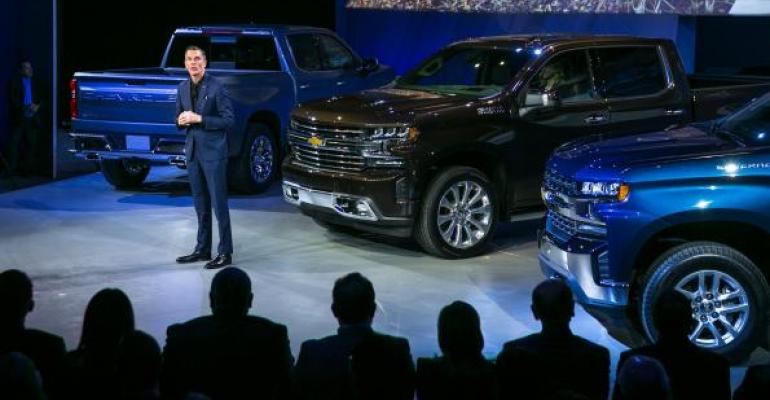 The unit has broadened the work it does inside the Chevrolet, Cadillac, Buick and GMC rooms to plot the future of those brands and meet the increasingly specific demands of consumers.

DETROIT – Spurred by an anticipated surge in new forms of mobility, General Motors has accelerated work within its advanced design studios and likely will take on bespoke work once the automaker starts building and selling cars to non-traditional transportation services providers.

At the same time, the design team has broadened the work it does inside the Chevrolet, Cadillac, Buick and GMC rooms to plot the future of those brands and meet the increasingly specific demands of consumers in key segments, says Mike Simcoe, vice president of GM Global Design.

“The feedback that we’ve gotten for some time is our customers want more choice,” says Simcoe, who is approaching his second year at the helm of the celebrated design organization.

For the clearest example, look no further than the redesigned ’19 Chevrolet Silverado, which GM unveiled here last month and arrives at U.S. dealers later this year. The automaker’s best-selling product will boast an eight-model lineup including a value-oriented Work Truck, a Trailboss variant targeting off-roading enthusiasts and the luxurious High Country.

GM also will continue to offer special-edition models throughout the product cycle as it did with the previous-generation model.

“It allows you to do more with content, which will allow you to separate the market,” Simcoe tells WardsAuto in an interview. “People buying in each of these segments are looking for something very specific.”

A full kit of accessories – much of it coming out of GM Design – also will accompany the new pickups.

“These customers are so enthusiastic,” he adds. “They are buying a customized truck to start off with, and then they can make it even more personal. Someone who buys a Trailboss would be the same type of person to buy a (Chevy) Camaro and accessorize it, because they project themselves into the vehicle as much as it delivers in its core form.”

The Australian native who began his career at GM Holden in 1983 says a new studio has been opened to accommodate the automaker’s advanced design team. The studio is part of a 360,000-sq.-ft. (33,445-sq.-m) expansion of GM’s design facility and a $1 billion, multi-year investment to the suburban Detroit R&D campus it calls home.

“There’s a lot (of advanced work) going on there now, looking to a future of electrification and autonomous vehicles but even beyond,” says Simcoe, who also oversaw the creation of GM’s Asia Pacific design studios in Korea.

GM has not increased advanced-design staffing levels meaningfully. Instead, Simcoe says of a unit cloaked in secrecy, “We’ve just turned the dials a little bit to make thing a bit simpler, a bit freer, to get more products into the vision space.

“The business is changing and we need to have strategic thought earlier and more often than before, and we’ve enabled that,” he adds. “We’ve simplified some things that have allowed resources to be moved to the (vision) side of the business.”

Much of the work evolves around electrification and autonomous vehicles, two areas where GM has moved aggressively in recent years to become among the global leaders in the space.

GM plans to introduce two new battery-electric vehicles in the next 13 months based on its groundbreaking Chevy Bolt EV. The cars will be the first of at least 20 new EVs from the automaker by 2023. In 2019, GM expects to deploy a fleet of AVs into a ride-sharing operation. This year it will spend $1 billion on advancing its AV expertise.

“It’s a core part of the business,” Simcoe says.

As such, AVs receive a great deal of attention from Simcoe’s group, where he suggests the goal is something between the fantastical lounge on wheels some people imagine and the stripped-down, last-mile people movers plying some city streets today in field tests.

“Behind closed doors, people are thinking a lot harder about the autonomous experience than that,” Simcoe says.

However, an autonomous environment inside the vehicle will create opportunities to offer radically different interiors with features previously prohibitive from a design, functionality or safety perspective.

“The level of branded experience is going to be much different,” Simcoe says. “It must be immersive in some way. Exterior styling, interior appointments, the experience will be branded.”

AVs for car-sharing and ride-sharing fleets also present a new opportunity for Simcoe’s team to step outside the world of GM brands. The automaker likely will build and sell EVs to fleet operators such as transportation services providers, which will want the ride experience to emulate their brand rather than one from GM’s global stable.

“The shared product could be us selling a vehicle to another brand,” Simcoe says. “We are selling something to someone else to use, but our piece of it might be setting up that vehicle.”

Autonomous does not have to mean utilitarian, either, he says. In fact, they could be high-end executions employing virtual reality, where, for example, holograms and gesture technology replace the buttons and knobs drivers and passengers currently use.

“If you think of where design has been in the past, it has been strictly controlled to the physical,” Simcoe says. “With technology, we can now take the customer experience deeper. It’s not just physical. We can do all sorts of stuff. We can make the whole experience more immersed even in a more traditional product.”

That is one reason GM no longer solely employs interior and exterior designers and color and trim experts. The design staff, for example, also includes people with experience in electronic gaming.

“The vehicle you are traveling in no longer is just a vehicle, but it is affecting your life,” Simcoe offers. “It has insight, like the little phone (that) controls your life. Put that in a vehicle and make it smart and quick to use.”

What is certain, Simcoe says, is that in a rapidly changing industry GM always must be looking to the future to remain competitive.

“The business is moving very fast and at every level,” he says. “The markets are changing quickly. Customers understand their specific needs and they are more diverse. The media revolution has allowed them to see more; aspiration is constant and technology is changing quickly.”