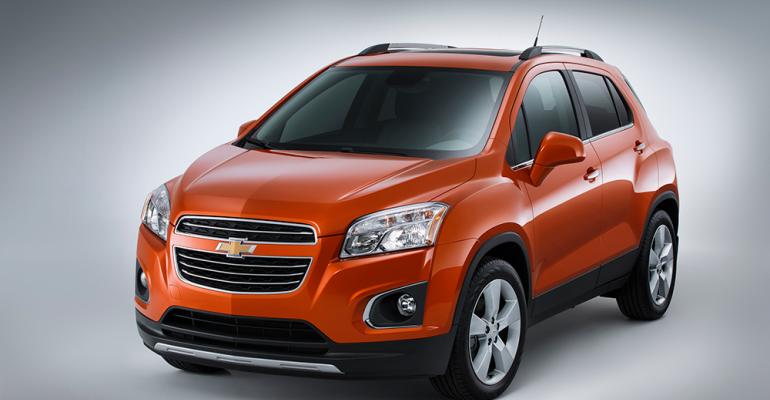 GM says it has delivered 90,000 units of the Trax globally since its launch in 2012. It will compete in the U.S. against the Kia Soul, Nissan Juke and Mitsubishi Outlander Sport.

NEW YORK – General Motors will add the Chevrolet Trax small CUV to its U.S. lineup early next year as a ’15 model, giving the automaker a second entry in the nascent but promising small-CUV segment.

The 5-passenger Trax, already on sale in 60 markets worldwide, joins the Buick Encore in the small-CUV sector, where sales so far this year are up 30.3% compared with last year, according to WardsAuto data. The segment’s share of industry sales is up to 3.2% from 2.7% year-ago.

GM says it has delivered 90,000 units of the Trax globally since its launch in 2012. It will compete in the U.S. against the Kia Soul, Nissan Juke and Mitsubishi Outlander Sport.

The Trax name comes from a 2007 concept vehicle, and the U.S. version bows for the first time later tonight at an event connected to the New York auto show.

“Trax offers customers another option in the Chevrolet family and will be a strong competitor in the emerging small-(CUV) market, which is expected to grow more than 80% by 2016,” Alan Batey, GM senior vice president-Global Chevrolet, says in a statement ahead of the unveiling.

GM builds the Trax in Bupyeong, South Korea, and San Luis Potosi, Mexico, for export around the world. China also will get the little CUV next year to bolster Chevy’s growing presence there. 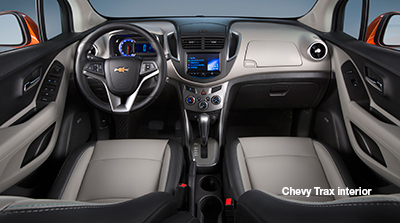 The Trax is outfitted with a 1.4L turbocharged 4-cyl. gasoline engine expected to make 138 hp and 148 lb.-ft. (200 Nm) of torque. The engine mates to a Hydra-Matic 6T40 6-speed automatic transmission. Fuel-economy estimates have not been released, but the Trax’s Encore platform mate gets upwards of 33 mpg (7.1 L/100 km), according to the U.S. EPA.

GM says a key element of the Trax will be its level of connectivity, which includes available OnStar 4G LTE and wireless Internet access.

The CUV also will feature Chevy’s optional MyLink infotainment system with a segment-exclusive 7-in. (17.8-cm) color touchscreen. GM says the Trax will be the first in its class to offer Siri Eyes Free technology, which operates via voice commands.

Other key elements of the Trax include electric power steering; a 2-tier glove box with a USB port for electronic devices on the upper level; a 60/40-split and fold-flat rear seat; a fold-down front passenger seatback to carry items up to 8.0 ft. (2.4 m) long; and standard remote keyless entry and available remote start.

Wheel sizes range from 16 to 18 ins. in steel and aluminum varieties, and the Trax rides on a McPherson-design front suspension with a compound-crank rear suspension.

Pricing will be released closer to the on-sale date.

Chevrolet Leaving Europe But Getting Boost in Russia
Jan 17, 2014