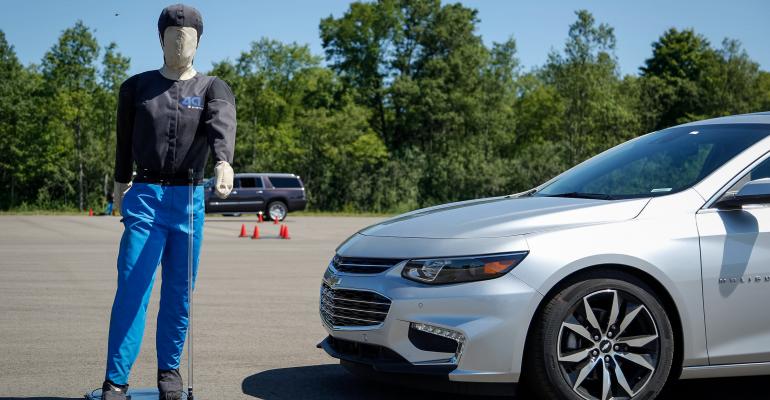 <p><strong>A few &rsquo;16 GM models will be fitted with new, relatively inexpensive autonomous braking capability that at low speeds can prevent striking a pedestrian, even a small one.</strong></p>
Vehicles

Its safety credentials undercut by recent high-profile setbacks, GM says it intends to lead in the coming epoch of active-safety innovation.

MILFORD, MI – The ’80s and ’90s saw automakers and megasuppliers launch a wave of new or expanded proving-ground facilities to deal with a headlong rush of electromechanical innovation that created a new landscape of powertrain and safety advances. Antilock brakes, airbags, all-wheel drive, stability control and a raft of other previously unimagined features all required exhaustive development in a controlled environment.

Now the digital era brings the singular promise of autonomous capabilities – and the launch of new facilities to develop these society-shifting technologies is coming fast and hard. Just a week after the University of Michigan unveiled a 32-acre (13-ha) simulated “city” for autonomous-vehicle testing in cooperation with several automakers, General Motors unveils as a part of its historic proving grounds here a new Active Safety Test Area intended to concentrate on autonomous-oriented safety advances.

The 52-acre (21-ha) ASTA site is barely 20 miles (32 km) north of the University of Michigan’s autonomous cityscape (GM is one of the automakers collaborating in that initiative, too), but GM executives and engineers are careful to point out their new $14 million testing site is concentrating on safety innovations based on autonomous technology, not automated driving.

There’s a good reason for that: GM believes the first phases of autonomous driving will be dominated by the safety-enhancing prospects for autonomous technology.

“The focus is on accident avoidance first,” says Mark Reuss, executive vice president-global product development and supply chain. “Accident avoidance is the key,” he says, not only to reducing the human and societal cost of vehicle collisions but also to vet the foundation technology that eventually leads to fully automated driving.

The ASTA facility incorporates seven test sites that include a 16-acre (6.5-ha) vehicle dynamics pad, a 6-lane highway simulation, parking- and pedestrian-test areas and an impressive structure that can replicate driving in a tunnel. The site also enables ongoing development of vehicle-to-vehicle and vehicle-to-infrastructure communication, crucial aspects of integrating onboard vehicle technology with information gleaned outside the car.

Demonstrated for the media on the fresh ASTA asphalt are active safety systems such as GM’s already-in-production City Speed Front Automatic Braking, which at low speeds up to about 13 mph (20 km/h) can, without any driver intervention, prevent a collision with another car or large object.

That system, marketed under various package or feature names, currently is available for GM vehicles such as the Chevrolet Impala, Tahoe and Suburban, several Cadillac sedans and the SRX crossover and the Buick Regal. At more than 13 mph and up to about 25 mph (40 km/h), the system, which in higher-end models uses front-facing radar combined with a forward-looking camera inside the windshield, can lessen the severity of the impact but not prevent the collision.

Engineers also demonstrate Front Pedestrian Braking. Coming for the ’16 Chevrolet Impala and Volt and Cadillac’s new CT6 fullsize sedan, the feature can identify a pedestrian as short as about three feet tall and, once again at speeds up to 13 mph, alters the driver and can automatically brake the vehicle to prevent striking the pedestrian. The technology works in a range up to roughly 50 mph (80 km/h), however, to mitigate the force of striking a pedestrian. Engineers say Front Pedestrian Braking employs only a front-facing camera in the interest of affordability.

Unlike Google and its high-profile public-road testing of autonomous-driving technologies, Reuss says, GM believes the best development route is in the controlled environment of a site such as the new ASTA.

“We’re in the car business and they’re not,” Reuss says of Google, adding diplomatically, “There’s not one right solution.”

But Reuss, who’s seen GM’s safety reputation take a beating over the past 1½ years regarding its handling of the recall related to faulty ignition switches, is adamant about the ultimate endgame for GM’s active-safety development: “The work here is extremely important to help us achieve our goal of auto-safety leadership. It’s time to turn potential into reality right here.”