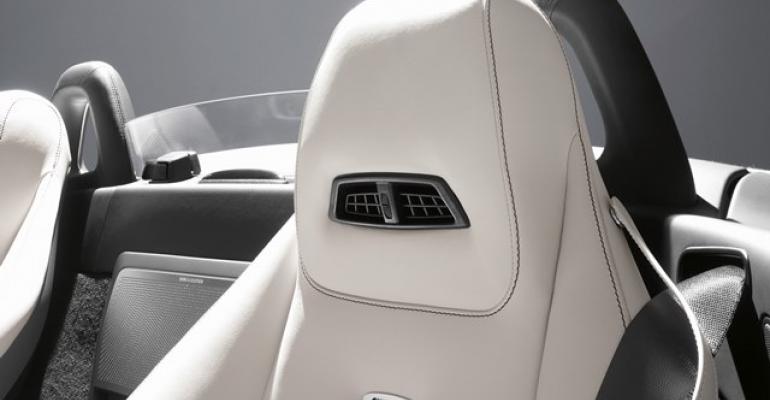 A German court rules Mercedes-Benz infringed on a patent with its Airscarf, a headrest-mounted system for warming or cooling driver and passenger neck areas.

Mercedes-Benz must disable the Airscarf ventilation system installed on all new and used cabriolet and roadster models within its German sales network, according to a patent-infringement ruling against parent company Daimler.

The court ruling, handed down May 10 after a nearly 10-year legal battle, finds Daimler infringed patent rights held by Ludwig Schatzinger in various aspects of the Airscarf design. The order comes after two earlier court rulings in Daimler’s favor.

As a result of the infringement, Mercedes-Benz is ordered to disable Airscarf on all cars within its German sales network. Models involved include the SLK/SLC, SL, SLS roadster, newly unveiled C-Class cabriolet, E-Class cabriolet and the recently introduced S-Class cabriolet.

Additionally, the German automaker must withdraw all advertising material surrounding the Airscarf system, which uses a ventilation element mounted within the backrest of front seats to deliver warm or cool air to the neck of the driver and front-seat passenger.

The German national court also ordered Mercedes-Benz to reveal how many cars have been delivered with the Airscarf system since February 1998 and to pay unspecified damages to Schatzinger, who has held the patent rights since 1996.

The ruling singles out unsold new or used cars within Mercedes-Benz’s sales network. North American cars and cars installed with Airscarf already sold by Mercedes-Benz are not affected.

“It only affects cars within Mercedes-Benz’s German sales network,” an official who asked not to be named tells WardsAuto, adding, “As the situation stands right now, there is no legal requirement for an official recall.”

The deactivation of the Airscarf system on German-market cabriolet and roadster models will only be temporary, though. The patent rights infringed upon in the design of the current system are set to run out this December, allowing Mercedes-Benz to reactivate it on all cars from Christmas onwards.