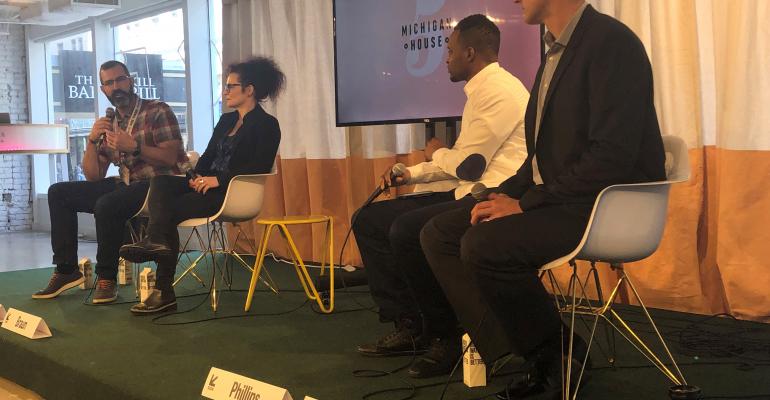 Audi engages governments around the world on mobility projects, such as its Green Light Optimization Speed Advisory, but convincing them to adopt the automaker’s technologies has not always moved at the speed of a Formula One pit stop.

AUSTIN, TX – The automotive industry is on a fast track to future mobility, but it needs governments to open the throttle, too, and asks for patience from startup partners moving more quickly than any of the players.

Larissa Braun, director-Innovation Research at Audi, says the automaker engages governments around the world on mobility projects, such as its Green Light Optimization Speed Advisory that tells drivers how fast to go to catch green lights for a greener commute with fewer carbon-dioxide emissions.

“Stop and go is the worst when it comes to CO2,” Braun tells a South by Southwest panel here sponsored by PlantM, a mobility organization and industry matchmaker for the State of Michigan.

But the process of convincing governments to adopt Audi’s vehicle-to-infrastructure communications strategy has not always moved at the speed of a Formula One pit stop. Governments are highly departmentalized, so getting to the right person can be time-consuming. Some politicians have been in office for a while, too, and may prefer the status quo, like automakers themselves did for many years.

“Cities can’t move as quickly as they would like,” Braun says. “(But) it has not been easy for us either because our business has been all about secrecy.”

Vehicles are complex machines, as well, says Braun, who has worked with government municipalities in the U.S., China and Germany. Adding digitalization to the picture compounds the complexity and can overwhelm bureaucrats not up to speed with the latest technology or staffed with the correct expertise.

“There are a lot of politics going on and it is difficult to bridge that sometimes,” Braun says.

“There is a need for some education, to smarten up a bit,” he says. “The automotive industry has had 20 years to learn about these technologies and cities have not.”

An open, thoughtful approach is necessary for any collaboration, says Matt Benson, director-Innovation Fueling, Faurecia xWorks. As a global supplier to every major OEM, Faurecia’s business is built on collaboration, although the sharp increase in startups within the industry in recent years has led the company to act with a great sense urgency and, at times, to tolerate failure.

“If something does not work there has to be a willingness to walk away,” he says, adding that working with startups requires speed because those companies often do not have a long lifespan.

Encourage employees to identify an opportunity and allow them the freedom to move forward on a long leash, he adds. They can connect back to the home office later with results, perhaps a prototype or findings from an experiment.

Braun says Audi has taken a similar approach to its collaboration with startups, allowing trial-and-error to a degree it never has before and setting up hubs where employees can work at arm’s length.

“It is important to decentralize and get away from the bureaucracy of headquarters,” she says. “And don’t bring startups back to the headquarters. If you do, they’ll be dead.”

Braun admits it is challenging for a mature industry to operate in the present while making expensive investments on an uncertain future.

But as startups such as Uber and Lyft have demonstrated, the gamble can pay off. Both ride-hailing companies are poised for initial public offerings worth billions of dollars, yet neither has made a profit since revolutionizing mobility over the past decade.

“They are going for it,” Braun says. “We have to get over ourselves and go for it, too.”